Among others, the apostle John was given many vivid visions of the conditions that will be found on earth at the end of time. Their purpose is to warn the church about the devil’s wiles and relentless attacks so that it will be encouraged to stay loyal to Christ. These visions are intended to prepare the church for the Lord’s return through the revelation of the things that He, Christ, will permit the devil to undertake before He completes the establishment of His counsel.

In this vision of the beast from the sea, the apostle was, as it were, standing on the sand of the seashore and watching the beast come up out of the waters before him (i.e., out of the nations of the earth). This creature had received its power from the dragon himself, the devil. This beast appeared with a strange composite of animal characteristics. It was like a swift leopard, had feet like a bear, and had a mouth like a lion. The monster also had seven heads and ten horns with crowns on them. These heads and crowns refer to the nations of the world which oppose Christ. Their numbers denote completeness, indicating that through the beast Satan has united the whole world and reigns over it in opposition to Him. Certainly, it is described in this manner to represent a world government which will rule at the end of time with extreme cruelty and power. John also observed something very strange about this beast. One of its seven heads appeared to have been mortally wounded. It was a wound that should have been fatal. Yet, the wound had been healed. This healing caused the whole world to marvel at the beast. Could it be that this wound represents the temporary cessation of the unity of language at Babel? Or, could it be that it refers to Christ’s death when He crushed the head of the serpent (Gen. 3:15)? Regardless, the wound has been temporarily “healed” (Rev. 13:12–14) and will be so until the event recorded in Revelation 20:10 occurs.

This beast is not only a monster in appearance. Its very nature corresponded to its looks. This beast has been given a throne along with its power and received great authority from the dragon, Satan. The beast is in league with Satan. It is none other than the devil’s tool. The governments of all of the nations of the world are under his control. The beast has been given complete power over every tribe, people, tongue, and nation. They marvel at him, follow him, and worship him. Thus, the entire world has become unified under his rule. He now not only rules the world but has also been given power to make war against the church so that he can stamp it out. Sadly, not only does he make war with the church, but also he appears to have defeated it. His rule will definitely be a terrible time for God’s people, for the devil himself will be on his throne. They will no doubt wonder where is our God? Where is our protector?

But there is more. The beast has also been given a mouth to speak. He boasts of his great power and of his many achievements. Naturally, one who boasts of his own power and achievements will seek to minimize the power and greatness of his opposition. The beast is no different. He has been so successful in conquering the church that he will now seek to minimize and destroy the power and greatness of the Almighty. Therefore, he vocally blasphemes God’s name, His dwelling place, and those who dwell with Him in heaven. Such is the picture of the beast, a truly ruthless and godless power. 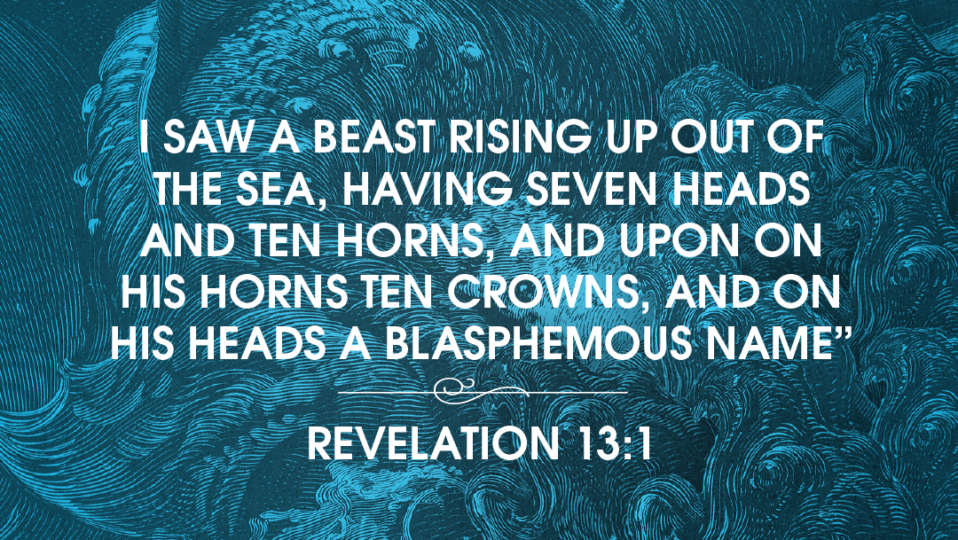 Thankfully, however, the final victory does not belong to the beast. Even though it seems as if no power will ever be able to overthrow him, God still rules and remains on His eternal throne. He has allowed the beast a short but definite time of rule over the earth. When this time is over, God will call a halt to his raging. Although many of the people of the world will have worshiped him, this will not be true of God’s faithful believer. The elect, whose names have been written into the Lamb’s Book of Life and still worship only Him, will be spared. They will have been tried, but by God’s grace and mercy and through their faith and patience, they will remain loyal to the Savior. They are unconquerable by the regime of the beast because the Lord will uphold them. Remember His promise, given through His Spirit and found in James 1:12, “Blessed is the man who endures temptation; for when he has been approved, he will receive the crown of life which the Lord has promised to those who love Him.” Truly, God’s work will triumph while that of the devil will fail! Soli Deo gloria!

1. What is the period called in the time period between after the preaching of the gospel to all nations has been completed (Matt. 24:14) and just before Christ returns (Matt. 24:29)?

2. Although Jesus’ language very clearly instructs the disciples about the destruction of Jerusalem in AD 70, He is also telling them, and us, what the great tribulation will be like. Describe and explain the characteristics of that horrible event yet to come (Matt. 24:15–28).

2. Who is the dragon of Revelation 12:9? Note his characteristics.

4. What might be the connection between the “deadly wound” and the first promise of the gospel in Genesis 3:15 and of Colossians 2:13–15?

5. Connect what happened at the Tower of Babel and what will take place for a short time at the end of history to this passage. (Gen. 11:1–9)

6. What is the task the beast is to accomplish?

7. How does the beast, the “hand of Satan” as one commentator calls it, fulfill its task?

2. What assurances must the believer maintain during this period of time?

3. How do you react to the ideas that the earth will be destroyed by climate change, nuclear war, or some other means, which are promoted today, in view of Peter’s proclamation found in 2 Peter 3:10, 12?

This article is a selected lesson from the upcoming book The Unknown Hour, that is to be published by Reformed Fellowship this summer, 2020.

Rev. Jerome Julien, a retired minister in the URCNA who serves on the board of Reformed Fellowship. He and his wife, Reita, live in Hudsonville, MI, and are members of Walker URC in Grand Rapids, MI.