The Armor of God: The Call to Arms Against Satan

In Ephesians 6, Paul preaches the necessity of Christians being strong in Christ against Satan (v. 10). We call this “spiritual warfare.”

That might sound to some of us downright charismatic or Pentecostal! But make no mistake about 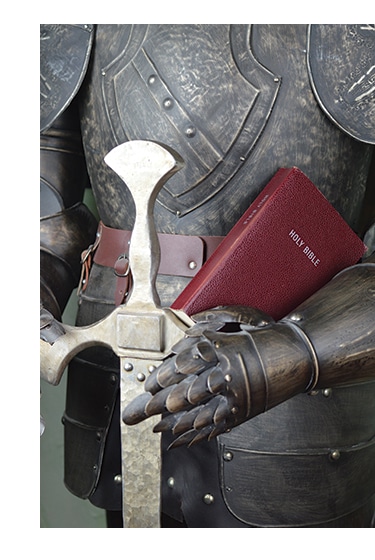 it; the apostle calls us to this warfare, and our Reformed forefathers did not take it lightly either. To be named after Christ as a Christian is to “fight against sin and the devil in this life” (Heidelberg Catechism, Q&A 32). Ephesians 6 is the field manual for this war. We pick up in this article with verses 11–12, where the apostle issues the call to arms against Satan.

We Are Called to Fight Divinely

To fight against a spiritual force we have to fight with the appropriate weaponry. Verse 11 opens with a call to fight divinely: “Put on the whole armor of God.” This armor is the armor of God. This means it is his; it belongs to him, and he alone can give it to us to wear. It is divine armor that we are called to put on and in which we are to stand and fight Satan. It is God’s armor because he is the warrior for his people. In Luke 11:21–22 we find the only other use of the Greek term translated “armor,” panoplia. And it’s describing Jesus as the “one stronger” than the “strong man” of Satan.

This armor is described in the New Testament, then, as God’s armor. Recall that it is called the “armor of light” in Romans 13:12. In contrast to the present darkness of an unbelieving world we are called to fight in an armor that is light. Paul also spoke of his ministry saying “we commend ourselves in every way . . . by the power of God; with the weapons of righteousness” (2 Cor. 6:4, 7).

What a panoply this is! But do not miss this, beloved: We have to put it on. We are called to fight divinely because Paul uses an imperative verb here. As John Calvin said about this text: “The Lord offers us arms for repelling every kind of attack. It remains for us to apply them to our use, and not leave them hanging on the rack or the wall.” We cannot be cold; we cannot be lifeless; we cannot sit back and think fatalistically that God is going to do it all without us. But he fights through us. He provides us with an arsenal to fight Satan, but we must apply it. We must appropriate what he offers. We must lay hold of it and make it our own.

So how do we put it on? The key is in the parallel texts in Romans 13 and 2 Corinthians 6. You’ll note there contrasts between “cast[ing] off the works of darkness” and “put[ting] on the armor of light” and “weapons of righteousness.” We have to fight in God’s armor, which means we have to fight in a godly fashion. “Cast[ing] off” means repenting of sin. “Put[ing] on” means believing in Jesus Christ. That’s why Paul says in Romans 13:14, “Put on the Lord Jesus Christ.” Continual repentance and faith are the keys to wearing this divine armor.

We Are Called to Fight Uprightly

We Are Called to Fight Intelligently

We also need to fight intelligently as we fight “against the schemes of the devil.” F. F. Bruce said, “To be forewarned about the nature of his wiles is to be forearmed against them.” Paul speaks of Satan’s schemes or methods (methodeia). In order to fight we must learn what these schemes are. In Genesis 3 we see four schemes: questioning God’s Word, attacking God’s character, promising God’s nature, and breaking God’s commands.

Here Paul goes on to tell us the reason we are to be strong and to take up arms with that little word, “for.” We are to do these things “for” or “because” there is a real spiritual battle going on. “For we do not wrestle . . . but against” (v. 12). “Be strong” (v. 10) and “put on” (v. 11) are different kinds of verbs than “we do not.” The verbs in verses 10 and 11 are imperatives. But when Paul says “we do not wrestle,” he describes what is already a reality. The opening verbs are imperatives while “we do not wrestle” is an indicative. The verb mood calls us to wake up to the reality that is around us and within us.

We wrestle in hand-to-hand combat, struggling against our foe. Yet “we do not wrestle against flesh and blood.” Instead, we wrestle “against the rulers, against the authorities, against the cosmic powers over this present darkness, against the spiritual forces of evil in the heavenly places” (v. 12). Recognize the spirituality of this warfare by the amount of titles Paul heaps up to describe our foe: rulers, authorities, cosmic powers, and spiritual forces of evil. Recognize the spirituality of your warfare by the kinds of titles. What do they communicate? They proclaim that we wrestle with a strong enemy.

But here I want to delve even deeper. What are the particular things our adversary applies these schemes against in our lives? He loves to scheme against us about our being righteous and acceptable in the sight of God. How so?

First, he reminds us of the perfect righteousness of God against all sin, giving perfect and eternal punishment. Since we have sinned we deserve that punishment. Sounds logical, right? So how are we to respond? By reminding Satan of another of God’s attributes: his perfect justice. He will not punish the same sin twice, and our Lord has suffered the punishment due to our sins.

Second, he accuses us that it is not enough to have Christ’s righteousness, but that we must also be intrinsically holy. After all, after God made Adam in his image and upright; didn’t he command him to be perfect? And since you are not even close, how can you expect God to accept you on the final day? Yet, our Lord’s life and death were not only for our past sins but for all the sins we will ever commit.

He also schemes and accuses us concerning prayer. How so?

First, he uses all the activities of our lives and the cares of this world to crowd our calendars so that we do not have time to pray.

Second, he makes us think that prayer is such a difficult work. And after all, how can we who are so sinful engage in serious prayer with all our sins? This leads us to wait for a better time to pray.

Third, he causes us to think that our prayers are ineffective and fruitless. You didn’t pray with enough faith. You didn’t really mean that. How can God use that prayer? God will do what he wants, so why should I pray?

Fourth, the devil throwing dust in our face means while we are praying he diverts our attention to everything else: what time do I need to wake up tomorrow, did I remember milk on the grocery list, who’s winning the big game?

But fight Satan! Do so in God’s armor, not your own. Do so on your feet, not in retreat. Do so with intelligence of his schemes so that your fight will be more effective.