Psalm 137 begins, “By the rivers of Babylon we sat and wept.” In 586 B.C. the southern kingdom of Israel was taken into captivity by Babylon. The Israelites were living as foreigners in a beautiful city; yet, they wept, for they were not home.

The Psalmist writes that they sat and wept when they remembered Zion. Realize that Zion was salvation for the Israelites. It was at Zion where God dwelt. Thiswais where the temple was standing. Zion could not be destroyed. But it was. This is why they sat and wept. The great city of God was destroyed.

The Israelites were not sitting in prison behind metal bars. Babylon was a beautiful city on the Euphrates River. There were rivers flowing through it, with beautiful flowers and gardens. Still, it was not Zion; they were not home.

Singing was also very important to God’s people. This is how they would praise God. In verse 2, however, we read, “There on the poplars we hung our harps.” They could not play beautiful music because they were not in Zion. The writer of this Psalm wrote in first person plural; leading one to think that the he was probably a Levite. Levites were in charge of the music in the temple. Here they are mocked and ridiculed. The Psalmist wrote, “For there our captors asked us for songs, our tormentors demanded songs of joy.” However, the songs of Zion were to be sung in the temple and in worship to the Almighty King. How could children of the Holy God of Abraham, Isaac, and Jacob sing while in Babylon? For them, it must have been like singing your national anthem in a foreign country. It just did not fit.

The heart of the Psalmist was yearning for the Lord’s deliverance back to Zion. This was in their thoughts day after day. We, too, from time to time have a longing to go home. We long to see our Savior. Sure, we thank God and love the good gifts that He has given us on the earth, but something is missing. We as Christians strive to serve God, and over and over again we fail and we fall far short. We long to be made perfectly whole. This vale of tears press down hard upon us. Our hope in future glory. So it was with the Psalmist; this was his sorrow, this is the sorrow of God’s children.

A promise made in this Psalm is not from God, but from the Psalmist who says, if I forget Jerusalem, may two things happen to me. First, May my right hand forget its skill, and second, may my tongue cling to the roof of my mouth.

What was the Psalmist actually saying in this promise? Remember that he was a Musician Priest. He was a player of the harp. He brought his harp with him in exile. He must have had hope. So it was with his tongue. He was a singer of the songs of Zion. What he promised was that his purpose, his work, his vocation, his praise, his hope would be gone. Remembering is important because in remembering there was hope. 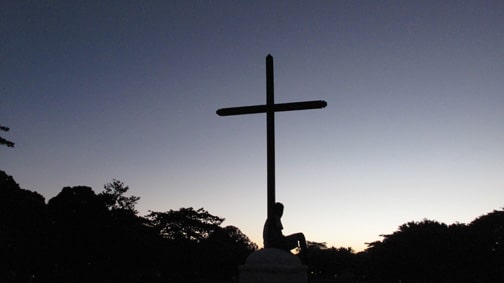 Hope has always been important to the people of God. Paul wrote in Philippians that we eagerly await a Savior. This is our hope—that the Savior will come. So too, with the exiles in Babylon.

The exiles were in distress. There hope was in what was to come. Their hope encouraged them to be patient and wait for the Lord’s deliverance. Easier said than done! Yet, their hope remained the same. They were always looking ahead, watching, waiting for their salvation. Most of these exiles went back to Jerusalem and rebuilt the temple. Their prayers were answered, but not in the rebuilding of the temple–there was more. There was the greater hope to be found in Jesus Christ. Christ came and the salvation of God’s people was accomplished. The catechism teaches that His righteousness, satisfaction, and holiness are ours (Lord’s Day 23).

Our hope is in what happened two thousand years ago, but also in what is happening, and what will happen. We confess that our Redeemer lives. He did not stay in the grave; He arose. Therefore we can have joy in sorrow.

God’s people are the only ones who can have joy in a time of sorrow. This is why Christian funerals are joyous occasions. While there may be mourning and sorrow at a funeral, there is joy, as well. We are pilgrim’s passing through.

Our hope and joy always have an object. Our joy is Christ, our hope; and our longing is for Jerusalem. Not Jerusalem, the war-torn city in Palestine, but the New Jerusalem where saints in glory stand. That Jerusalem that will have no more sorrow, no more pain. Just Glory! Glory with our Lord.

Verses 7–9 of Psalm 137 are not very popular among many Evangelicals today. You will not find many “praise and worship” songs quoting these verses. In fact, there are some who think that these three verses, and others like them, cannot fit into a Christian framework. Some wrongly say that the God of the Old Testament is a God of anger and of justice, but the God of the New Testament is a God of grace. This is a wrong idea and very displeasing to God. God is the same today as He was yesterday and the same today as He will be tomorrow.

In verse 7 we read: “Remember, O LORD, what the Edomites did on the day Jerusalem fell. ‘Tear it down.’ they cried, ‘tear it down to its foundations!’” The Edomites were were blood-relatives of the Israelites. Jacob and Esau, were the fathers of these two nations. Jacob was the elect child of God and Esau was the reprobate. It was through Jacob that God would establish His covenant for generations to come. Esau was cast out and hated by God.

God had commanded Israel not to destroy Edom, yet Edom was involved in the destruction of Jerusalem. These Edomites in verse 7 yelled, “Tear it down.” This mean to lay it bare, show it’s foundations. Show how it is weak and vulnerable. This is actually a very graphic word. In the original, it has the connotation to prepare a woman for sexual assault… lay it bare. The wickedness of the enemies of God was seen for what it was worth. You can see the raw carnal humanity of the Psalm writer and the raw carnality of the Edomites. You can almost feel the pain of the writer at he recounts the events of the destruction of Jerusalem.

The Assyrians and Babylonians were a ruthless people and they would have seized the Jewish babies and cast them against the stones. Never underestimate the depravity of man. This same thing happened in World War II to Jewish babies. This is indignation against those who oppressed God’s people and desecrated the city of God. This is the part of the Psalm that makes it an imprecatory Psalm-a Psalm that calls for the judgment of God upon the enemies of God and His people.

The Jews were a people that were always looking ahead. They were looking ahead to a fulfillment of Genesis 3:15. We can see where the serpent has struck the heel of the seed of the woman in the destruction of the temple by the Edomites and the Babylonians.

Over and over again the Bible tells us about the Babylonians as a figurative devil. Babylon was the opposite of Jerusalem. The curse was not just against the people who lived along the Euphrates river; the curse was a judgment against the devil and his kingdom, his angels and his followers.

The Prince of Pride will be defeated. His head will be crushed, his infants seized and dashed against the rocks. The seed of the woman will prevail. The victory is done. Satan is defeated. Death is conquered by the Messiah. This is what we celebrate as Christians.

The children of God no longer need to sit by the waters of Babylon and weep. It is true, we are not home. But we have the victory. We are raised up with Christ as victors over sin and the grave. Now the call comes to live as victors in humble obedience to our Savior. Put away sin and turn to the Lord.

Mr. Steve Swets is a student at Mid-America Reformed Seminary in Dyer, Indiana. His a member of the Schererville United Reformed Church.