“Does your wife work?” the inquiring mind wanted to know.

“All women work,” I replied with my best ‘90s sensitivity. “They are compensated in different ways.”

I was reminded of that little exchange when I saw the story in November’s Vanity Fair magazine titled: “America’s Most Influential Women: 200 Legends, Leaders and Trailblazers.” With few exceptions (and the exceptions are the rich wives of wealthy men), these are the familiar feminist icons—women who have jobs outside the home. No full-time (or even part-time) stay-at-home moms are featured. Husbands, if any, are out of sight, and children, if any, are ignored. Feminists want us to believe these “other women” are an extinct species, or that when we encounter them, their lives are being wasted.

It is a slur on women choosing to stay at home because they find such work more valuable than “working” women who trust their children to day-care providers, nannies or “preschool” teachers.

What is influence? One of its definitions is “power exerted over the minds or behavior of others.” Are female Cabinet members. corporate CEOs and political activists the only women considered to have such power? Does a TV anchorwoman who reads words written by others from a Teleprompter have influence equal to that of a stay-at-home mother directing the moral, social and intellectual development of her children? 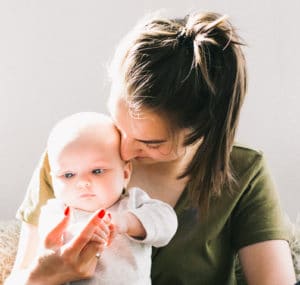 Gail Evans, a vice-president at CNN, tells me she stayed home for a decade to help rear her children before accepting a job outside the home. “I learned more about managing a business carpooling kids in a nine-passenger vehicle than I would have learned at Harvard Business School,” she says.

Recently, CNN anchor, Donna Kelley, relinquished her post in Atlanta in favor of part-time work so she could spend more time with her husband in New York City. “Last week I made turkey vegetable soup on a cold day and bread from scratch,” she tells me. “My sweetheart came home and said. Wow…” Kelley says she can still keep up with what’s going on in the world and will work part-time, but that she needs “balance” in her life, and “family time provides that balance.”

Each year, conservative leader Phyllis Schlafly gives a “Full-time Homemaker of the Year” award to a woman who “is raising her family on a single income earned by her husband in the traditional family pattern.” This year’s recipient is Carolyn Graglia of Austin, TX, a graduate of Cornell University and Cornell Law School. Graglia gave up a career as an attorney in a prominent Washington D.C. law firm to work full-time as a wife and mother to her three children.

Listeners to Dr. Laura Schlessinger’s radio program frequently hear women call to thank her for giving them permission to quit work outside the home. None speaks “of sacrifice,” but rather of the blessings they receive from investing themselves in the “career” of building other lives. Laura Ouaglio was a successful magazine editor. but when her daughter was born she chose to work part-time at home. She tells Dr. Schlessinger: “I wanted to be the one guiding her, playing with her, bandaging her hurts, sharing her joys. I wanted to show her how to cut paper snowflakes and paint pumpkins. And it didn’t hurt that I saw this type of family fun going on right next door.”

Hearing that she had turned down a promotion. Ouaglio’s husband said, “Honey, you could’ve been queen,” to which she replied. “I am.”

Schlessinger faults “the pursuit of happiness through acquisition, constant stimulation and immediate gratification (which) always fails to deliver” as the motivation behind so many women abandoning their young children to people and influences outside their immediate family. “Teri S.” wrote about her decision to stay home with her 18-month-old: “My son has a mother and my husband has a wife who has taken the time to slow down to remember what’s really important in life: time not money spent.” Why aren’t such people included on a long list of influential women? It is because they are not in charge of the culture. It is because feminism has decreed that the only women who matter are those employed and working outside the home.

In the Vanity Fair article, women who represent “the strongest voices for some of the nation’s most pressing issues” are all socially liberal: the American Civil Liberties Union’s Nadine Strossen, National Organization for Women’s Patricia Ireland, National Abortion and Reproductive Rights Action League’s Kate Michelman, Planned Parenthood’s Gloria Feldt and so on. There isn’t a conservative, “traditional” woman in the bunch. The stay-at-home moms probably won’t notice. They’re too busy being influential. They don’t have time to read about their sisters who only think they are.