“We need Reformed systematic theology!” This is the plea that Juan, an inmate at Danville Correctional Center, made to the men from Immanuel United Reformed Church when they held a Bible conference in the prison three years ago. It was a plea they could not forget.

The men from Immanuel URC in DeMotte, IN, were already committed to ministering to those in prison because of an experience within their own fellowship. A member of their church had been convicted of a crime and was sentenced to prison. The church was seeking to minister to this member and his family during his prison term. Several members of the church became involved in holding chapel services in jails and prisons, recognizing that God was calling them to minister not only to their brother in Christ but also to others in prison.

When the group from DeMotte held their one-day Bible conference in the Danville Correctional Center in Danville, IL, three years ago, their vision for prison ministry expanded dramatically. The men in the prison were not only eager to have more instruction in God’s Word but they were also hungry for organized, long-term instruction. Desiring to meet this need, Immanuel URC formed a committee to explore the possibility of creating a seminary within the prison walls, following the pattern of New Orleans Baptist Seminary, which created a branch seminary inside the walls of Angola Prison in Louisiana in 1995. 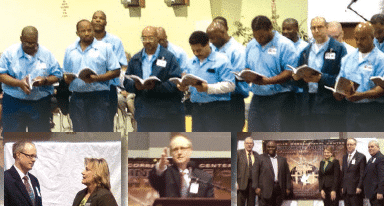 That vision became a reality on Saturday, March 10, 2012, as nearly thirty inmates and thirty others—including chaplains, seminary professors, board members, the prison warden, and guests—attended a ribbon-cutting ceremony within the walls of Danville Correctional Center to celebrate the beginning of Divine Hope Reformed Bible Seminary. The seminary has appointed Rev. Nathan Brummel to be the director and first professor of the new seminary. He began teaching the first classes on March 5.

Dr. Nelson Kloosterman, executive director of Worldview Resources International, spoke next. He described four features of Reformed theological instruction. First, it is Bible-based. He told the students, “You will never read your Bibles the same way again.” Second, it must be Christ-centered, leading you to love Jesus as never before and to model who and what Jesus is. If it is not Christ-centered, Kloosterman said the students should “ask for your money back.” Third, Reformed theological instruction must be church-directed—it must be a community endeavor that draws Christians together. Finally, it must be life-changing. There is no sense in learning for the sake of learning alone. Learning is for living.

Kloosterman next addressed the question of social justice, which must be other-directed, so that the students will develop a heart and hands that are willing to serve others, being willing to model weakness in a prison atmosphere where bravado and appearance of strength predominate. “It means you are willing to die. Die to self, and show others how to do that.” Kloosterman said we should expect a real change in the atmosphere in this prison because of the new seminary. “It may not get headlines, but your warden and the guards will notice.”

Why should a seminary be started inside the walls of a prison? “Why not in prison?” asked Kloosterman. “This is a controlled environment, a needy environment; therefore, the prison community can be a model environment.”

On the basis of 1 Corinthians 8, Kloosterman warned the men of the danger of being puffed up with knowledge, which results in brutality, or of thinking they can have love without knowledge, which leads to sentimentality. Instead, “knowledge working in love will motivate you to have a true love for God, for each other, and for the broader world.”

One significant factor in making Divine Hope Reformed Bible Seminary a reality is the enthusiastic support of Warden Keith Anglin. He had seen the success that New Orleans Baptist Seminary had in Angola Prison, and he is eager to see the same transformation at Danville. As Warden Anglin introduced some of the chaplain staff, he commented on how the board of DHRBS and Rev. Brummel are totally committed to making this project a success.

Rev. Brummel spoke next. He thanked several people for their tireless work in bringing the seminary to this joyful commencement. He expressed his own joy in being called to this ministry. It is quite evident that he loves not only the work to which he is called but also the men whom he will be teaching, calling them “my joy and my crown” (1 Thess. 2:19). Brummel addressed the question of how men in prison can be rehabilitated, that is, restored to a useful and constructive place in society. Understanding the difference between Augustine and Pelagius on the question of the nature of man is key in addressing this. Man is conceived and born in sin, so we dare not be falsely optimistic. We need a dramatic transformation. “Therefore, if anyone is in Christ, he is a new creation. The old has passed away; behold, the new has come” (2 Cor. 5:17).

Brummel emphasized that seminary instruction would involve studying God’s truth as he reveals it in his Word. Quoting from John 17:17, “Sanctify them in the truth; your word is truth,” he pointed out that God’s Word is not only true, but truth. The men will be required to memorize Scripture, which is hard work. Why will this be necessary? “I have stored up your word in my heart, that I might not sin against you” (Psalm 119:11). Rev. Brummel said, “We expect great blessings from God on your re-entry into society.” He pointed out that Reformed theological study is difficult, but it is so important to love God with your mind. Quoting from Abraham Kuyper, he reminded us that “In the total expanse of human life there is not a single square inch of which the Christ, who alone is sovereign, does not declare, ‘That is mine!’” Following Voetius, Brummel believes that orthodox faith gives testimony to itself in a changed life. He closed by expressing his desire for the men whom he will be teaching: “What I pray for you is that you will have intelligent piety.”

Jon Hoek returned to the podium to describe the process the board went through to find the man who was qualified to lead Divine Hope Seminary. As they reviewed the organizational, theological, and pastoral qualifications for a director and professor for the new seminary, they believed that such a man could not possibly exist. That is what they thought until they met Rev. Nathan Brummel. Hoek told the students, “The Lord brought you the best of the best!”

Next, the guests were privileged to hear a choir composed of the prison students singing the hymn, “What a Friend We Have in Jesus.” Four of the students spoke briefly about what this new seminary means to them. It was especially gratifying to hear Juan, the same man who three years earlier had urged the brothers from DeMotte to give them systematic theology, speak of the unchanging faithfulness of God, express praise and glory to God, and thank the men who made this possible. He has found his first week of instruction to be enjoyable and enlightening. Another student, a death row inmate, said, “It’s not for us; it’s for Jesus! He doesn’t share his glory with anyone.” A third student declared the existence of this seminary to be “evidence of God’s power to do miracles.” Chaplain Stephen Keim, chief chaplain for the Illinois Department of Corrections, expressed his excitement in seeing the new seminary begin. Keim was thrilled to see students seated before him who had received instruction from him at Menard Correctional Facility in Chester, IL; he encouraged all the students to gain wisdom and knowledge and put them in action. “How proud of you your loved ones must be that you are taking this step!”

Ms. Mary Engle, executive director of Prison Fellowship, extended greetings and well-wishes for the new seminary. She said, “You will be amazed to see the change that takes place in you. God is raising you up as a great army for his glory. It will be hard; you will be challenged, but always remember, God is with you.”

God has certainly shown himself present in the beginning of this new seminary. It was a thrill for my wife and me to be present at this opening ceremony. We were greatly encouraged to have an opportunity to shake hands with the students and to see their excitement in being a part of this new work. One of the men told us, “I learned a new word already: monotheism.” I was reminded of the words of Deuteronomy 6:4, “Hear, O Israel: The LORD our God, the LORD is one.” That one, true God shows his sovereign grace not only to us who live in freedom but also to those whom he has called and redeemed who are in prison. Praise to God for the work he has begun in this new seminary!

For more information about Divine Hope Reformed Bible Seminary or to support this ministry, visit www.dhrbs.org or email divinehopedanville@yahoo.com

Mr. Henry Gysen is a member of Sovereign Grace URC in Grand Rapids, MI. He is the general manager and president of the board of Reformed Fellowship, Inc.