When Ezra talks about intermarriage, he is not making distinctions along narrow ethnic lines. This book cannot be construed as a call for ethnic cleansing or for white supremacy or anything like that. This is a call for religious purity, for marriage only between believers, and for a rejection of marriage between believer and unbeliever. God will bless those who fear him. In Ezra 8 we were reminded of the covenant promises to those who fear God. Shecaniah reminded Ezra of that when he tells Israel, “Let us make a covenant with our God to put away all these wives and those who have been born to them, according to the advice of my master” (v. 3). The apostle Paul warns us about this same sin, telling us to not be unequally yoked with unbelievers (2 Cor. 6:14). The same apostle warns women that new converts should not divorce their spouses on the grounds that they are married to an unbeliever. The situation that Paul is addressing is significantly different from that confronting Ezra. Ezra is concerned with believers who knowingly violated God’s law by marrying pagan women. This is grounds for annulment. If we truly fear God, he will bless us. Our options are simple: If we love the world, God will be angry.

If we love God, the world will be angry. Which would you prefer? Would you rather have God angry at you, or have your neighbor angry with you?

1. What is the response of the people to Ezra’s prayer of confession and repentance? (See Text Note 10:1.)

2. What is the message that Shechaniah brings to Ezra? On what does he base his hope? (See Text Note 10:2.)

3. What is significant about Shechaniah’s confronting Ezra with his confession that “We have trespassed against our God”? Why is it important that he is introduced as “the son of Jehiel, one of the sons of Elam”? (See Text Note 10:2.1; v. 26.)

4. How does Shechaniah propose to deal with this crisis? What is his attitude toward the Law? (See Text Note 10:3–4.)

6. What is the nature of the proclamation that Ezra and the leaders issued throughout Judah and Jerusalem? Were its demands fair and reasonable? What penalties would accrue if the people failed to comply? (See Text Note 10:7–8.)

7. What was the nature of the response to this proclamation? Who came? What inconveniences did they experience? Would you have complied in the same way, if you were summoned that way by your leaders? (See Text Note 10:9.)

8. What did Ezra demand as conditions of compliance with his proclamation? On what basis could he make such demands? (See Text Note 9:11–12 from Lesson 12.)

10. What penalties were assessed against those who had broken God’s law? Are those penalties consistent with the advice of Paul to the Corinthians? (See Text Note 10:18–19; read 1 Cor. 7:10–16.)

[10:1] What we have in Ezra 10 is an account of the reformation of Israel as conducted by Ezra. Ezra, as God’s appointed leader, sets the pace for confession and repentance. We are all familiar with the Reformation that was led by Martin Luther, John Knox, and John Calvin, but not as familiar with such Old Testament reformations as those under King Asa (2 Chron. 15) and under King Josiah (2 Kings 23:1–30). At various points in human history, God brings about a revival and a reformation.

[10:2] In order for a reformation to occur, certain conditions must exist or be in place: a knowledge of God’s law; and an awareness of a problem or an area where God’s law is being violated. The problem is that many of the men, led by the priests and officials, had violated God’s commands about intermarriage with nonbelievers (see Deut. 7:1–12). There were far more men coming back to Jerusalem under Zerubbabel than there were women. Ezra 2 lists 29,818 men out of a total of 42,360, so there was probably a significant shortage of eligible women for marriage. During the second migration there were 1,773 men plus “women and children.” Shecaniah admits, “We have trespassed against our God, and have take pagan wives from the peoples of the land; yet now there is hope in Israel in spite of this.” Ezra knows that God is merciful and gracious to his people, that he will forgive them their trespasses if they come to him in repentance and fear. Shecaniah reminds Ezra and all the others that there is still hope, even if we commit sin. There is a way of escape, but it must involve repentance and genuine sorrow for sin. We are saved by faith in Christ’s atoning death and shed blood, not by strict adherence to ethnic bloodlines.

[10:2.1] Shechaniah is obviously a God-fearing leader who recognizes and dares to deal with the problem: he is identified as “the son of Jehiel,” one of the descendants of Elam (vv. 2, 26), who is listed as one of the offenders. He is willing to annul the marriage of his own father and mother, because his mother obviously is not a believer, a pagan woman. He doesn’t come with excuses or requests for exemption but confesses the sin of his own family.

[10:3–4] The important thing is that God had promised to take care of them and to bless them, provided that they obeyed his law. He knows, too, that we don’t just marry the girl, but we marry into that girl’s family and become friends and associates of all her brothers, sisters, and other relatives, thus surrounding ourselves with a large collection of evil influences. Shechaniah insists that the solution must be found in compliance with God’s law. He addresses those remarks directly to Ezra, telling him that this matter is his responsibility. God’s appointed leader is responsible for bringing about the solution, even though he did not contribute to the problem.

[10:5] Ezra accepts that responsibility and pointedly acknowledges that sin, mourning because of the guilt connected with it and requiring “the leaders of the priests, the Levites, and all Israel” to swear an oath.” An oath is no slight matter, as Jesus warns his audience in the Sermon on the Mount, telling them, “do not swear at all” (Matt. 5:34). The writer to the Hebrews reminds us that an oath implies that we are calling God to be our witness to the truth of what we have sworn and that we deserve his just judgment if we are not telling the truth. “An oath for confirmation . . . is an end to all dispute” (Heb. 6:16). Ezra is conveying to his listeners the gravity of their confession and their resolve to correct the problem. He is commanding them to take God himself as their witness. 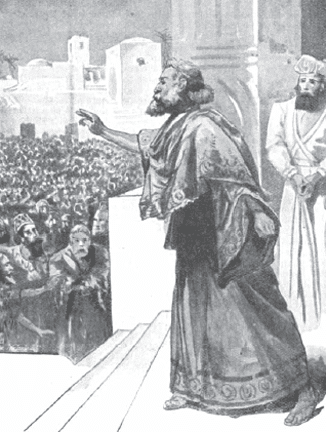 [10:7–8] The proclamation is issued on short notice. Ezra responds immediately to Shecaniah’s advice and “issued a proclamation throughout Judah and Jerusalem” (v. 7). The consequences of noncompliance were strict and severe: “whoever would not come within three days . . . all his property would be confiscated and he himself would be separated from the assembly.” Ezra’s proclamation has the force of the Persian Empire behind it. Ezra had been commissioned by King Artaxerxes of Persia to “appoint magistrates and judges to administer justice . . . to teach any who do not know them . . . and to punish by death, banishment, confiscation of property or imprisonment” (Ezra 7:25–26, New International Version).

[10:9] There is genuine repentance. This is certainly demonstrated by Ezra in 9:3–7 and in 10:1. But the people also respond, for “a very large assembly of men, women and children . . . wept very bitterly” (v. 2). Now, after the proclamation, “all the men of Judah and Jerusalem,” that is, the husbands and fathers of the nation, “sat in the open square, . . . trembling because of this matter” (v. 9). Why would they weep bitterly? It is because they are afraid of God, afraid that he will be so angry that he will destroy them from the face of the earth. They are ready to confess that they have sinned greatly and that they need to act “until the fierce wrath of our God is turned away from us” (v. 14). They understand that the fear of the Lord involves genuine fright, terror, fear, and alarm. Both in the Old Testament Hebrew and in the New Testament Greek the meaning is the same: to be alarmed; to be exceedingly afraid; to have an uncontrollable phobia; to be terrified. But their trembling is also “because of the heavy rain.” Their twentieth day of the ninth month would translate into December 19, when it is winter in Jerusalem, with average temperatures of 40 to 50 degrees—it is both cold and wet. It is the rainy season, so they cannot stand outside all of the time that would be required.

[10:16] Ezra appoints a special blue-ribbon commission of “certain heads of the fathers’ households, . . . each of them by name,” “together with the elders and judges of their cities” (v. 14) to adjudicate each case individually. This becomes a rather long session. “On the first day of the tenth month they sat down to investigate the cases, and by the first day of the first month they finished” (vv. 16–17). This would carry them from December 29 until March 27, or three months, with approximately seventy-five days of hearing and deciding, assuming that they did not work on the Sabbath but did work the other six days of the week. The original gathering and the hearings were all held in Jerusalem, “in the open square of the house of God” (v. 9). This is a major case of church discipline, which needs to be conducted as church business, at the house of God. If we follow that example, we must call people to meet the elders at church, should there come a time for formal discipline proceedings. Only four men protested to this whole procedure, one of whom was Meshullam, who had married a foreign woman (v. 29). The other three are also named, with one of them being a Levite (v. 15). The text does not tell us what their objections were or on what grounds they opposed this decision. They could have argued from precedent and cited the cases of Joseph marrying an Egyptian (Gen. 41:45), of Moses marrying a Midianite (Exod. 2:21), of Boaz marrying Ruth, a Moabitess (Ruth 4:13), of David marrying Maacah, a Geshurite (2 Sam. 3:3), or of Solomon marrying a daughter of Pharaoh (1 Kings 3:1).

[10:18–19] Out of 30,000 men, there were only 111 cases where the elders and the commission had to judge that the men “had taken pagan wives . . . and all gave their promise that they would put away their wives.” What they did in effect is to have their marriages annulled on the grounds that they were contrary to God’s laws. We have situations where annulments can occur within our legal system (e.g., if a person is underage and lies about their age, getting married without parental consent, when such is required). “For their guilt they each presented a ram of the flock as their trespass offering.” With only a minimum of resistance, the men of Israel again demonstrate their willingness and their desire to serve the Lord and to live according to his commands. God’s Spirit is truly at work in a wonderful way, so that they repent of their sins and turn back to God. Their names, however, are forever emblazoned on the pages of Holy Writ as offenders who had to be punished. Their disgrace is public.