In the last issue, the source of authority was written about. God is the source of all authority. God the Father gave authority to His Son, the Lord Jesus Christ. Christ exercised authority while on earth authority to forgive sins, to drive out demons, to teach, to judge, and to give eternal life. Today the Lord Jesus Christ, the Son of God, is seated at the right hand of God the Father as King of the universe. The Lord God has given us His holy Word, the Scriptures. The Scripture is the God-breathed Word of God. Today God speaks to us by way of His Word. We need to listen to that Word. Now we go on to the topic of agents of authority.

Not only does the Lord come to us by way of His holy Word, He also enters our lives through different agents. God comes to us by way of different people whom He puts in authority over us. We need to understand that. By the same token, the one who is in a position of authority needs to understand that as well. And he had better not abuse his authority. From the Word of God we can even say: Woe to that person who abuses his or her authority and who thereby hurts the one under their authority. We will write more about that in a future issue—about the abuse of authority. But let the warning ring out that it will not go well for him who abuses his authority and hurts a little one. If he does not repent, it would better for that person to have a millstone hung around his neck and for him to be cast into the deepest part of the ocean.

But we have gotten well ahead of ourselves. This issue’s topic is: agents of authority.

Basically, God places us under three spheres of authority. They are: our parents, the church, and the state.

The first persons with authority in your life were your parents, your mom and your dad. They were given the task and the responsibility to raise you, to teach you, and to discipline you. Children are to submit to the good instruction and discipline of their parents. The LORD God even had something to say about this in the Ten Commandments. The fifth commandment says: “Honor your father and your mother.” There are many places in the Bible that teach children to obey their parents. 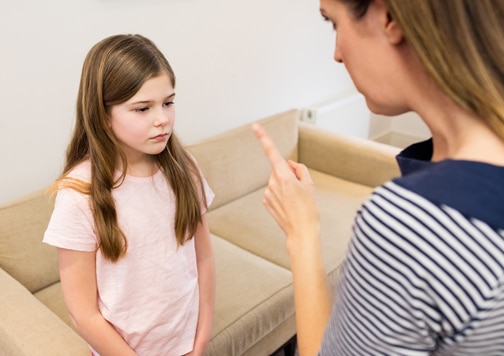 In the New Testament, the apostle Paul mentioned this as well. In Ephesians 6 he said: “Children, obey your parents in the Lord, for this is right. ‘Honor your father and mother…’” In this context, he had a special word for the fathers: “Fathers, do not exasperate your children; instead, bring them up in the training and instruction of the Lord.”

We can also think of the beautiful summary of what the Bible teaches about this in Lord’s Day 39 of the Heidelberg Catechism:

104. Q. What does God reqUire in the fifth commandment? A. That I show all honor, love, and faithfulness to my father and mother and to all those in authority over me, submit myself with due obedience to their good instruction and discipline, and also have patience with their weaknesses and shortcomings, since it is God’s will to govern us by their hand.

But God does not only govern us through our parents. He also draws near to us through the church. The Lord Jesus Christ has vested authority in the church. This authority is, first of all, to preach the gospel. The church is Christ’s preaching agency. Before He ascended to heaven, the Lord Jesus Christ sent His disciples out to preach the good news about salvation in His name and to teach people how to live in obedience to His will. He said to them: “… go and make disciples of all nations, baptizing them in the name of the Father and of the Son and of the Holy Spirit, and teaching them to obey everything I have commanded you.”

The apostles took this command seriously. They themselves went out into the world preaching, discipling, baptizing, and teaching. Before they died, they trained others to preach. In the last letter he wrote before he died, the apostle Paul wrote to Timothy, minister of the church in Ephesus: “And the things you have heard me say in the presence of many witnesses, entrust to reliable men who will also be qualified to teach others” (2 Tim. 2:2). Timothy, taught by Paul, had to teach others who would, in turn, be able to teach others.

And so to this day the apostolic message has been handed down through the church. The faithful church of Jesus Christ has continued to preach the good news about salvation in the name of Jesus Christ.

In Matthew 16, the Lord told Peter and the other disciples that He was giving them the keys of the kingdom of heaven, and that whatever they bound on earth would be bound in heaven, and whatever they loosed on earth would be loosed in heaven. The Lord hereby gave the church authority to declare guilt or innocence. If a member of the church is living in disobedience to the commandments of God, then the church has the authority to tell that person he stands guilty before God. And when a person repents, again the church has the authority to declare that person innocent innocent before God on the basis of the blood of Jesus Christ.

The Lord Jesus developed that a bit more in Matthew 18. There He said that if a member of the church refuses to repent of a specific sin, if he hardens his heart and holds on to that sin, if he loves that sin more than Jesus Christ and obedience to His Word, then the church has the power, authority, and responsibility to excommunicate that person. To bar him from the rights and privileges of membership in the church, and to declare that he, because of his hard-hearted sin against God, and because of his unwillingness to seek forgiveness at the foot of the cross of Christ, no longer has a place in the kingdom of heaven.

We have an example of this process at work in the New Testament. In his first letter to the church at Corinth, chapter 5, Paul said that it had been reported to him that there was a case of sexual immorality in the church that shocked even the pagan unbelievers of Corinth (as depraved as Grecian society was, apparently incest was almost unheard of). The case was one of incest. A member of the church was publicly living with his stepmother. The church did nothing about it. In fact, the church was kind of proud about how enlightened it was that it could tolerate such a thing.

Paul said to the church: Put this man out of your fellowship! He continued: “When you are assembled in the name of our Lord Jesus and I am with you in spirit, and the power of our Lord Jesus is present, hand this man over to Satan, so that the sinful nature may be destroyed and his spirit saved on the day of the Lord.”

The church was to put this man outside, to excommunicate him, to hand him over to Satan. By expelling the man from the church, he would be thrust into the devil’s territory, severed from any connection with God’s people. The purpose was not only the preservation of God’s good name, but also that by being officially ostracized from the church, the man would experience such anguish that he would repent and forsake his wicked way.

So, you see that the authority to discipline, which Christ gave His church, is remedial. It is meant to reconcile the sinner to Christ and the church. All discipline is meant to be therapeutic. You can make the analogy with discipline in the family. It is supposed to be healing. Administered in a firm but loving way, it brings correction. Sadly, discipline is sometimes administered in a cruel, abusive and destructive way. That is no longer discipline. That’s something else. It’s abuse. We will turn to that painful topic in a future issue.

The point is that discipline in the family and in the church is meant to bring healing and correction—to reconcile the sinner to God.

There is a third agent of authority, and that is the state.

In Romans 13, Paul taught that the government authorities have been appointed by God. Paul even calls the government “God’s servant.” God has ordained kings and civil officers whom He calls to govern by laws and policies, so that the sinfulness of man may be restrained and things may be conducted in our country in good order. God even gives the state the sword to punish the evil doer. Article 36 of the Belgic Confession provides a wonderful summary of the Biblical teaching on this.

Typically, governments do not acknowledge that they have their authority from God. In our country, called a democracy, the governments of course think they have their mandate from the people who elected them. That is only partially true. The full truth is that God mandates them. God uses the election to bring them into power, but He gives them the authority they have. Governments ought to realize that. The authority and power they have, they have from God.

Now that we have considered the source of authority and the agents of authority, we need to think about the style of authority. How ought those to whom God gives authority in this world—parents, the church, the civil govemments—exercise that authority? What ought to characterize their authority? In a word: service. All authority ought to be qualified by service. Servant leadership. To that matter we tum next time.