But perhaps nowhere is the blindness more consistently seen than with regard to the Sunday School. Christianity knows perhaps no greater or more subtle menace. When one considers the tremendous investment of time and money which the Sunday School involves, the problem becomes all the more serious.

The Sunday School has its ready defenders from J. Edgar Hoover on up and down. Judges and law enforcement officials generally join with the clergy in stating that children who attend Sunday School regularly are rarely Involved in delinquency, and that the vast majority of criminals are enlistments from outside the ranks of the church. These statements are, moreover, true, and only served to point up more sharply the essence of the problem.

The Sunday School is successful today in fostering a moral citizenry. It constitutes a powerful weapon for social order and decency. It is a consistently effective weapon in combating juvenile delinquency. Law enforcement officials are right in their evaluation of the Sunday School’s social value and function. With all this we have no quarrel. 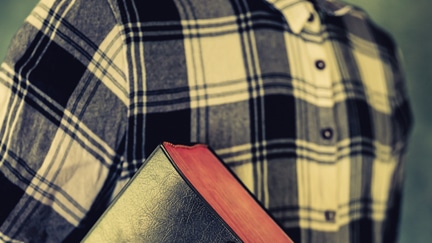 A young woman, struggling with serious personal problems, confided to her pastor that her marital and personal failures had been compounded by her Sunday School training. A product of both liberal and fundamentalist churches, she stated that everything she ever learned in Sunday School insisted that she had to be good to be a Christian, while everything she had now learned most emphatically declared that she was a Christian, not because she was good, but because God is good; that not her righteousness saved her and was the foundation of her daily life. The first attitude had led her into reasonable, kindly but still clearly self-righteous life, one in which her handling of problem, depended on her works. The second attitude gave her a recognition of her nature as a sinner saved by grace and dawning, joyful humility and dependence on God which began to offer hope for a solution of her problems. In her moralistic frame of mind, she had been unable to accept herself or life; she was filled with doubts and frustrations. In her godly frame of mind, she accepted herself and life with a growing realism and a growing recognition that she had to see herself as God saw her, be ready to accept his love and recognize the honor and glory it gave her, and grow in terms of it.

This incident brings to focus the menace of the Sunday School. It teaches precisely that faith which the pulpit is called upon to wage war against. It inculcates either outright Pelagianism and works-salvation, as in liberal circles, or a Judaizing faith in conservative circles. Its effects are almost invariably moralistic. Although some lesson materials clearly emphasize the gospel, the greater majority of teachers even more clearly teach the children that they must be good as Jesus wants them to be, and avoid being bad Such teaching is a standing offense to the godly pulpit and to Scripture. It Is subversive of all Christianity. The fact that in some Sunday Schools salvation is taught and decisions called for does not alter the facts; atonement and the cross are added on to goodness and works as the means of salvation, and this is the practical effect on the minds of the pupils. Virtually every Sunday School youngster can give some, kind of definition of what good and bad mean, but not one in ten thousand can define the covenant of grace.

Another unhappy fact must be noted. Because of its moralistic nature, the Sunday School attracts as teachers a very high proportion of “do-gooders”—people whose delight it is to participate in every kind of community activity and who glow with civic and moral righteousness because they do so. Because of their deep-seated moralism, they tend to underrate the services of divine worship and make more important the Sunday School program. Family attendance at church services has given way to a priority for children’s attendance at Sunday School. Because worship is equated with understanding alone, a moralistic equation, it is asserted that children are better off in Sunday School, junior church, or the nursery. It is not surprising that children who are trained in Sunday School attendance drift out of the church after school years to return only when they have children to bring to Sunday School. The church school has become for them the central institution, and moralism their religion. They participate in the church in order to perpetuate the school. The Sunday school has become the triumph of the Sadducees and Pharisees, and the Judaizer, as well. Sometimes it can only be described as anti-Christian. The pastor who prepares a sermon for Sunday morning and evening delivery on the meaning of Christian faith and life is struggling not only against the faith of the World but the faith of his own Sunday School.

What the children receive from the school, therefore, is not a godly faith but a moral faith, and the only consequences of such a development can be religious disaster. If Scripture means anything, it makes clear that God is very jealous of his honor, nor will he tolerate sacrilege. And the modern Sunday School program is sacrilegious in that its emphasis is not God but moralism and its results assessed too often in terms of happy social consequences rather than godliness. And whenever and wherever the Sunday School exists on this basis to any degree, it is a menace to Christianity and an offense to God.