Article 2 of the Belgic Confession is divided into two short and simple parts: the knowledge of God in the “book” of creation, and the knowledge of God in the “book” of Scripture. The Confession uses the literary feature of a simile here to compare creation to a book when it says it “is before our eyes as a most elegant book, wherein all creatures, great and small, are as so many characters.” The parts of creation are similar to letters in that they communicate a story to us. Calvin speaks of the creation by saying, “the glory of God is written and imprinted in the heavens, as in an open volume which all men may read…the glory of God is not written in small obscure letters, but richly engraven in large and bright characters, which all men may read, and read with the greatest ease.”1

“We know Him by two means: First, by the creation, preservation, and government of the universe.”

We speak of the knowledge of God in the first “book” as “general revelation.” This means first, that it is revealed generally to all men, and second, it reveals a general knowledge of God as Creator, but not as Redeemer. 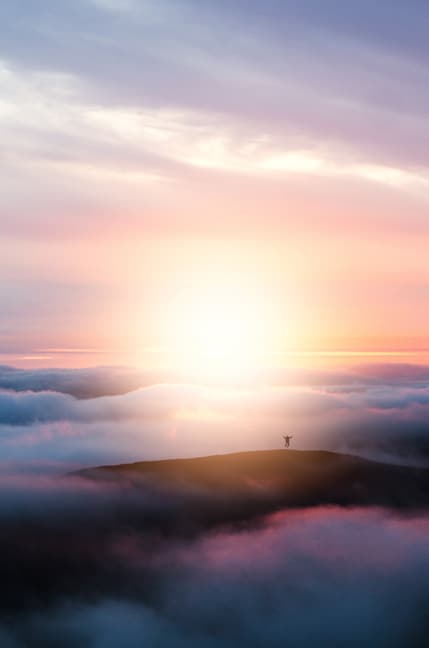 The Psalmist in Psalm 19 declares the wonderful knowledge of God made known by the heavens and the earth in verses 1–4. He personifies the heavens as an eloquent preacher, whose voice is so loud and clear that all men, everywhere and at all times, can hear and understand him. The clarity of this knowledge to all men, everywhere and at all times, is so overwhelming that Calvin says God “…daily place[s] Himself in our view, that we cannot open our eyes without being compelled to behold Him.”2

In verse 1 the Psalmist says to us that the heavens declare God’s glorious power while the firmament above exhibits the craftsmanship and wisdom of God, the master architect-builder. Verse 2 says “day unto day…night unto night” which means that every moment of every day from the beginning of creation until its end, the knowledge of God’s power and wisdom are made known. Verse 3 says to us that there is one universal language which all mankind knows: the language of creation. And verse 4 says that the book of the knowledge of God in creation is from one end of the world to the next.

As we meditate upon Psalm 19 and the knowledge of God revealed in the “book” of creation, we are reminded that this world “is my Father’s world.” And one day all men will know that this cosmos, all that there is, is the world of theFather of the Lord Jesus Christ. As one man has said, scientists areclimbing the mountain of knowledge little by little seeking to find out the meaning of life and the world we live in, and when they finally reach the top they will find the great theologians of old awaiting them!

The Confession then goes on to say that God did not just create the universe, but that He through His Son, at this very moment, and since the beginning of the world and unto its end, has been “upholding all things by the word of His power” (Hebrews 1:3); for “in Him all things consist” (Colossians 1:17). The providence of God, as we know from our experience of His care for us, is “the almighty and ever present power of God by which He upholds as with His hand, heaven and earth and all creatures…that without His will they can neither move nor be moved” (Heidelberg Catechism, Q&A 27–28).

The “government” of the Lord is His “almighty and ever present power” in relation to history. This means that even the course of history, the rise and fall of nations, the succession of times, and the outcome of world events are “completely in His hand” (Heidelberg Catechism, Q&A 28). This is what Paul was saying to the pagan philosophers on Mars Hill when he said, “He has made from one blood every nation of men to dwell on all the face of the earth, and has determined their preappointed times and the boundaries of their dwellings” (Acts 17:26).

The glory of God, then, is revealed in the creation, providence, and government of the universe as in a mirror.3 And this mirror is large enough and clear enough for all to look in to. In these three areas we see the very fingerprint of God’s “handiwork” and are led heavenward to our Creator.

Paul says to us that God’s invisible attributes, especially His eternal power and the fact that He is divine, and we are not, is clear for us to see. But the Confession follows the Apostle in saying that this knowledge of God in creation, providence, and governance is of God as Creator. The content, then, of general revelation is not of God as Redeemer, but simply as the wise, eternal, powerful, and creative God that He is.

The Limit of General Revelation

This knowledge gloriously reveals God as eternal and mighty, but it goes no further. It’s purpose is to reveal that there is a Creator, that He is eternal, that He is wise and almighty so that men will be inexcusable on the last Day. As Calvin says, “this knowledge of God, which avails only to take away excuse, differs greatly from that which brings salvation…the manifestation of God, by which He makes His glory known in His creation, is, with regard to the light itself, sufficiently clear; but that on account of our blindness, it is not found to be sufficient.”4 This knowledge, Calvin is saying, is of Law, not Gospel. It leaves without excuse; but it does not save.

This is utterly practical for us because we live in a day when people are asking, “What about those who have never heard of Jesus but are ‘sincere?’ Many evangelical Christians are unknowingly following the teaching of the Roman Catholic Church, which says in its Catechism

Those who, through no fault of their own, do not know the Gospel of Christ or His Church, but who nevertheless seek God with a sincere heart, and, moved by grace, try in their actions to do His will as they know it through the dictates of their conscience – those too may achieve eternal salvation.5

While we confess with Paul that unregenerate man suppresses the knowledge of God (1:18), Roman Catholicism and others say they are neutral. While Paul says “there is none who seeks after God” (Rom 3:11), Roman Catholicism says men “seek God with a sincere heart.” So we believe that man is spiritually blind. And if there is someone in some far off part of the world whom the Father has elected, we believe that Christ died for that person, and that the Holy Spirit will irresistibly call that person by sending a preacher.

2 Institutes of the Christian Religion,