In 1999, the Psalter Hymnal Revision Committee formed in 1997 was given the mandate to work on a new URCNA hymnal. Finally, after thirteen years, the Hymn Proposal [HP] was presented by the committee for approval by the 2010 Synod. The preface states: “While the final collection of songs will be Psalms and hymns, this booklet contains only the hymn portion of that collection.”

This article, written after a thorough analysis of the HP, reveals some pertinent data regarding the proposed hymns in the collection. There are 151 new hymns, new in the sense that they are to be included in the HP but were not part of our Psalter Hymnal. I will not evaluate the new hymns in the collection at this time. The intent of this article is to critique the numerous changes made by the committee to almost all of the hymns in the PH that they propose to include in the HP.

Only eleven HP hymns have exactly the same words as in our 1976 blue Psalter Hymnal [PH]. Five additional hymns remain the same in both, but the Amen of the PH is not included at the end of the last verse in the HP. Seven songs have different tunes; I did not examine whether any songs in HP have different harmonizations from the PH.

Forty-four HP hymns have alterations of supposedly-archaic words in the original PH. These are changes in words like thee, thou, hath, and wast. Of course, once those words are altered, other words have to be adjusted as well in order to make the hymns rhyme or to make the phrases or clauses flow a bit easier. In some songs, “ye” becomes “you;” plural nouns or verbs are changed to singular ones and vice versa; “the” is changed to “an,” “ever” to “always,” and many other similar changes. Thirty-eight songs that are in our blue PH have very many text evolutions and/or drastic revisions or are almost totally rewritten texts in the HP. The Lord willing, I will explain most of the modifications in much more detail in future articles.

For now, let us focus on the problem of inclusive language. It is a huge problem, for there seems to be no other reason for the transition of words from one gender to another. In practice, the committee seems to be guided by the principle that words such as fathers/sons, though scripturally correct, should not be used in the hymns of the URCNA churches. One of the principle guidelines of the committee states: “When Scripture is set to music, the words must remain faithful to the inspired text.”1 This principle has been violated in a song from the Psalm section of the PH now put into the hymn section of the HP. This song is #150 in the PH: “Let children hear the mighty deeds Which God performed of old, Which in our younger years we saw And which our fathers told.” It is based on Psalm 78. Psalm 78:3 is God’s word; it is translated “our fathers have told us” in the NIV, KJV, NKJV, NASB, and ESV. The original Hebrew noun is “ab,” masculine gender. However, HP# 223 defies this very clear reference to the masculine so that “fathers” becomes “parents.” This violation of God’s Word is also evident in HP# 69. In the Bible, Psalm 90:3, NKJV, reads, “You turn man to destruction, and say, “Return O children of men.” In the original it is literally “sons of man.” Our PH version of Psalm 90 reads “Time like an ever-rolling stream, Bears all its sons away.” That is correct biblical translation. HP# 69 does not remain faithful to God’s Word; it reads “Time like an ever-rolling stream soon bears us all away.”

There are eighteen songs with inclusive language adjustments (nineteen if one considers that one song is included two times with two different tunes). Following is a list of the drastic changes. The first column lists the original words, phrases, or clauses of the PH songs; the second column records the HP words changed from the PH words because of the inclusive gender inclinations of the committee. The words that are underlined italics show the gender modifications. The words that are merely italicized are all the other word revisions supposedly necessary to accommodate the gender-word changes.

In addition to the changes listed above, most of these eighteen songs have several other changes as well. In the HP, a verse has been deleted from PH #378 and two verses from PH #399; a verse has been added to PH #337 and to PH #356, plus the verses of 356 have been switched around. The committee took the liberty to delete and/or modify entire phrases and clauses in some of these songs in which they have used inclusive language. As well, there are other unnecessary changes such as substituting the word blessing for kindness, or praise for bless. Consider the following dramatic changes: 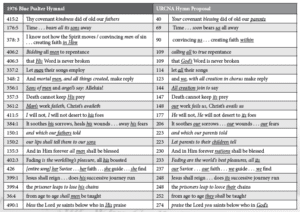 The analysis in this brief article leads to some serious questions about the HP. Was it the mandate of the Psalter Hymnal Revision Committee of the URCNA to tamper with the songs our forefathers sang and we today sing in praise to our Maker, our Redeemer and our Judge? Was the committee told that URC members want inclusive language in our new Hymnal and so are willing to throw out words that refer to man/men/fathers? Many of us love the PH; whether young or old, we sing the hymns by memory and delight in those songs that are theologically sound. While we are singing, we do not want to analyze whether a song or word is gender correct or not. God’s people know and believe Genesis 1:27: “So God created man in His own image; in the image of God He created him; male and female He created them.” Throughout the Bible the word man, which word is the name God assigned to the man He created, is all-inclusive. Our society is so closed-minded, and so blinded with eyes that cannot see. It cannot understand that biblical mankind refers to men and women and by God’s decree is extremely inclusive. Will we in the URCNA deny God’s Word by giving in to the feminist thinking that dominates our world? Even the dictionary defines man with these words:

“ . . . the human race; mankind . . .”2  Who gave the hymn committee the authority to belittle our language and our Reformed feelers as well as to defy God’s Word with these intrusive gender changes?

The writer of this article pleads with the consistories of our churches diligently to study the HP before considering it for approval. May our God be merciful to us and bless us.

Editors note: Although invited, The Psalter Hymnal Committee refused to participate in this series of articles in a constructive manner.

Mrs. Sheila Ypma is a graduate of Dordt College and former school teacher. She is a member of the Trinity Reformed Church (URC) in Lethbridge, Alberta.