Springtime is the time for a change of apparel. Not all can afford a new dress every spring. And probably it is not necessary. But if you have worn a garment for half a century, a new dress is not exactly a luxury, especially if the old garment was a borrowed one and never fitted you.

The new dress which I have in mind is not exactly brand new. By this time it must be about two years old. But seeing that the old one was obsolete, the present garment can be called comparatively new. The owner of the new dress is Art. 70 of the Church Order. The new dress dates from June 1955, when the Synod of that year clothed said Art. 70 with its new dress. There were indeed a few who were so in love with the old garment, Dot minding that it was borrowed and rather ill-fitting, that they wanted to retain it with a few necessary alterations. But the majority took great pride in the new dress and may continue to do so, until some flaws may show up in it. And, being quite new, apparently no defects have become apparent.

Alt. 70 of the Church Order, which concerns itself with the circumstances connected with matrimony, was an immigrant from the Mother Country, the Netherlands. When it landed on these shores it somehow slipped by the customs officials. And no naturalization papers were ever taken out for it. It paraded as an American citizen for a long period. And, being an article in a venerable set of rules, called the Church Order, it was treated with due respect until some years ago it was found that the whole Art. was an imposter and had nothing to do with church worship.

This sounded rather irreverent. A request was made to cut out the article on account of its foreign identity. The request was not heeded. Instead the alien was handsomely arrayed in a new dress, the gloss of which was supposed to hide its real nature, which admittedly is not ecclesiastical. It was feared that the surgery of cutting out the proud flesh might hurt the dignity of the Church Order.

So now we have the step-child in a new gown which gives it a form of all curves and no angles. I have not heard of any serious angle showing up yet. It would be well to examine this article in its new dress a little closer. It is supposed to be a set of rules governing the transaction of joining a couple in the holy bond of wedlock. But if you read the present setting you notice that nothing is said about the essential nature of the transaction (uniting a man and a woman in wedlock), though you may not have observed that immediately. This omission by inference proves that the nature of the transaction is admittedly not an ecclesiastical one. It is well understood that the institution of marriage is a civil institution. And since a civil transaction should not have a place in an ecclesiastical set of rules, the article speaks merely about the circumstances connected with this transaction. It enlarges upon the dress in order to hide the foreign nature of the body.

We notice that this new dress is a four-piece garment. The first one which is mentioned and which is the most conspicuous is the topcoat. It contains an injunction for consistories to admonish those under their spiritual care to marry only in the Lord. This is good advice and is a repetition of Paul’s exhortation to the elders of Ephesus plus an admonition to the Corinthians that their widows were at liberty to re-marry but only in the Lord. Therefore since these tasks have been the work of the ministers and elders for hundreds of years and still are, there is nothing specific in this injunction for which reason it should have a place in the Church Order. It is simply one of the serious duties connected with the pastoral care of ministers and elders.

The second piece of garment fits the body very snug and is closely connected with it. This second sentence describes the ornaments with which the transaction ( solemnization of marriage) should be adorned. It states that those ornaments are provided for in the official Form (of marriage). This is evidently a slip in the presentation of the garment. For if you speak of an official Form, you exchange the civil nature of the body into a semi-ecclesiastical. That the Church should speak of an “official” Form is directly caused by the rather peculiar situation of a minister of the Church performing the work of a civil agent in a civil action. In the instruction preceding the solemnization and in the admonition following it, it is the pastor who addresses the couple which are normally under his spiritual care. But in the solemnization proper it is the same person speaking as a civil agent having received his authority to perform this rite from the State and speaking in the name of the State when uniting two people, male and female, in the holy bond of matrimony. 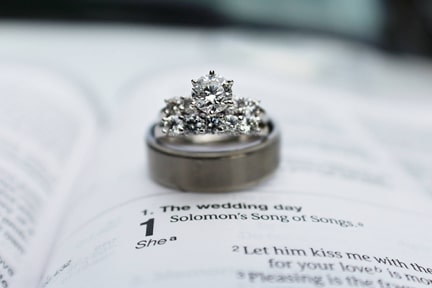 It would therefore not be out of order for the Church to adopt a certain form which may be used if so desired. But you cannot speak about an official Form for something that is not ecclesiastical. And any minister should be and is free to use another form if he or the couple to be married so desire. The Church cannot bind the civil actions of its ministers to a certain form, no more than that the Church can control how or for what person a minister should vote in the general elections. And the joining in wedlock is and remains a civil action, whether it is performed by a minister or by a justice of the peace.

Keeping this in mind makes the third piece of garment, which is rather inconspicuous, a hollow phrase. It is supposed to grant liberty for marriage solemnization either in a worship service or in a private gathering of friends and relations. This would be a rather innocent ruling, if it was not so ridiculous. What authority has a church or a church order to make that kind of a ruling or allowance for a civil action performed by a civil agent though he be at the same time a pastor? The choice of the place of the wedding should be the choice of the parties to be married or of their relatives in consultation with the officiating agent. I presume that a consistory would have the right to refuse a marriage to take place in or before a church service in the church, provided that consistory have adequate reasons for such refusal.

And then comes the fourth piece of the garment, which is rather nondescript and which seems to have been added as an afterthought for a sort of safety device. It reads: “Ministers shall not solemnize marriages which would be in conflict with the Word of God.”

Before examining the safety clause in this sentence it might be well to ask why any particular prohibition must be made concerning ministers. Are they not members of the church they serve, and as such are they not under the supervision of the consistory as are all members of the congregation? Why must any special disciplinary ruling be made in regard to the civil life of the minister?

How safe is this last piece of garment pinned onto the body? Is there no danger that the pin might work loose and cause friction or pain? For if you begin to question when a certain marriage would be “in conflict with the Word of God,” the answers would vary a great deal. Who is to judge whether the marriage of a certain couple would be in conflict with the Word of God? Are all marriages in conflict with the Word of God, except both parties be confessing members? Is the minister the sale judge or must he ask his consistory or is the congregation the judge? I am afraid that right here some sharp angle may turn up in this nice-fitting dress which could create havoc. Not when a minister refuses to marry a certain couple. He has the fullest right to refuse to marry any couple at all, even if one of his own sons or daughters should be a party to it. And no church can demand that he is obliged to do this work. It is not pastoral work. And the State which gives him authority to perform this transaction does not at all demand this of any minister of the gospel. It merely grants the privilege to do this task.

But trouble might arise if a minister should unite a couple in wedlock which in the eyes of “public opinion” would not conform to the Word of God. Then what? The couple are legally married and you cannot undo this. What proof can be furnished that a certain couple should no have been married? The apostle says: Marriage is honorable among all. Nevertheless there are certain cases which a minister may refuse to unite. In this matter he is to be the sole judge. And if his judgment should not be according to public opinion, are you going to discipline him and if necessary take your case to classis and synod? And will they be able to judge?

So it proves that this pinned-on shawl is not a very good safety device after all. It certainly does not eliminate trouble or friction.

The conclusion must be that it would have been much better to cut out this whole article, which in its essence is a civil action and not an ecclesiastical one, instead of dressing this foreign-born stepchild in a modern ecclesiastical garb. It will always remain a civil action governed by civil laws and performed by civil agents. No amount of trimming can hide this. Neither is there any need for such misrepresentation. Marriage is the oldest divinely ordained institution for the realm of civil life: is sustained by the common grace of God and is valid and binding until the end of time.