Truly, persecution is a major sign of the times. It will increase and increase, culminating with the great tribulation, where, under the direction of Satan, all restraint will be thrown off and his purpose will be made clear. The enmity which began as soon as sin entered into the world will reach its height. Indeed, our Lord himself said “men will show their hate for you and kill you” (Matt. 24:9) because you belong to him.

Believers have experienced persecution time and time again during the history of the world. To begin with, a majority of the apostles, according to tradition, died as martyrs for their faith and ministry within the first century. In Roman times several of the emperors, including Nero, Marcus Aurelius, Decius, and Domitian, among others, sought to stamp out Christianity. The latter claimed to be god and demanded that he be worshipped as such. As time went on, persecution of the faithful continued. Many believers were martyred for their faith in the years leading up to the Reformation. The persecution of believers continued to be present in many places following it. Unfortunately, persecution has not stopped, for we read of it occurring in many countries today also. Included are countries found in Africa, the Middle East, and Asia, as well as in the western hemisphere.

In the past, wars were usually fought for political or economic reasons, but not for the purpose of persecuting believers. In the end days this will change. The nations will not focus on each other but will concentrate on believers. This, as Jesus said, will be a sign of the times that must come to pass because the attitude of the whole world will have changed toward believers. In the latter days unbelievers will band together against them (Matt. 24:9–14). 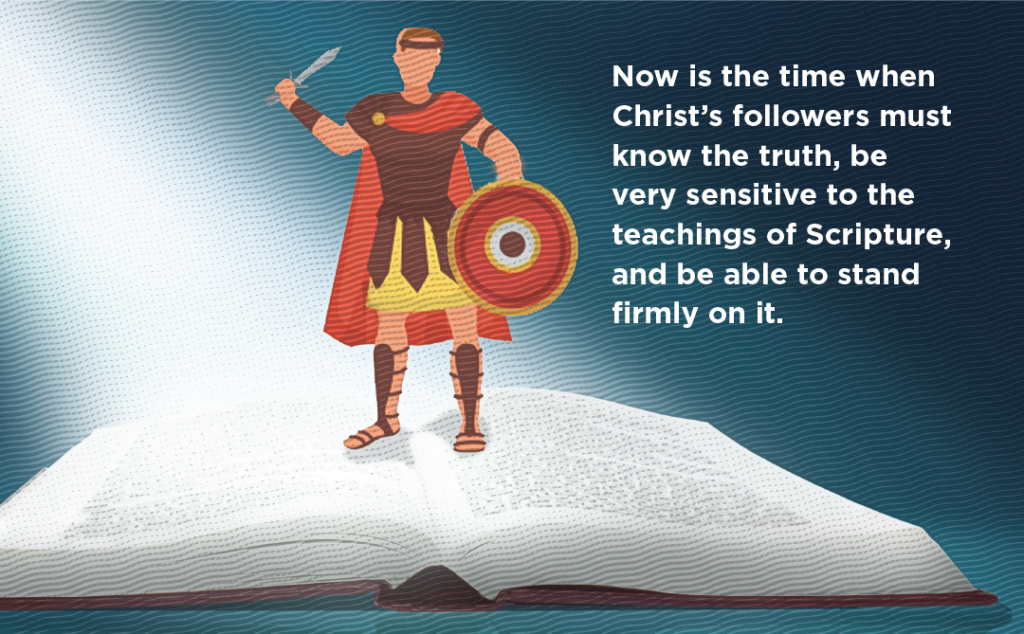 Persecution does not need to be physical. It can also come in the form of psychological or mental pressure, or in the form of deception, which is used by many false teachers (Matt. 24:11). A false teacher can be defined as anyone who teaches anything that is not a true interpretation of the Word or twists its meaning to fit a non-scriptural (biblical) position. These false teachers will be focused and will be found within and without the church. Some false teachers will attempt to join with the faithful in order to accomplish their deceitful goals. As they have done in the past, they will continue to seek to undermine the teachings of Christ in the present and the future. These false teachers are often subtle in their approach. Jesus constantly warned about them throughout his ministry stating that they are wolves in sheep’s clothing (Matt. 7:15ff.). This warning was later reiterated by the apostles in their writings. For example, the apostle Paul (Col. 2:8, 18a) specifically warns his readers about being cheated by false teachers. This is a warning that also pertains to us. We must, likewise, be on our guard against them every day. Remember, Jesus had warned his disciples that if his teachings and the Scriptures are compromised to any extent, Christians will then be easily encouraged to accept false teachings and to live peacefully with their enemies. As a result, many believers would thereby be easily led astray. Now is the time when Christ’s followers must know the truth, be very sensitive to the teachings of Scripture, and be able to stand firmly on it. What great temptations they will face both now and in the future!

There will be additional opposition from within the church itself. Some of its members will turn against the true believers (2 Peter 2:1–3). Many who previously confessed the Christ will reveal that their faith was not genuine. They will not care to endure the tribulation of that time. Both the false prophets and those who are falling away in the end time will not remain silent or neutral but will hate the true believers and will actively deliver the faithful to their enemies. Thus it will be a time of testing and temptation. It will become a time of purging.

Throughout the ages the church of Christ has been a tremendous influence for good in the world. The world’s moral standards have been due in part to the church’s teachings and influence. Although there have been times when unbelievers have put believers to shame in benevolent kindness to one another, this spirit will not be found in the later days. When this happens the whole world will rise up against the church and spurn its teachings. As the world attacks the church, the world’s morality will crumble and fall into decay. Hate will take its place, iniquity will be multiplied, and there will be a wave of sin and evil that the world has never before seen. Natural affection will cease and the love of many shall wax cold (Matt. 24:12), resulting in a wave of inhumanity sweeping over the entire world.

Yes, in the past the church often traveled an easy road. It was both easy and fashionable to belong to the church, but those days will be ended. Instead it will become a time of trial. The conditions of the present days will not go on forever. There will be an end. But is it possible for the world to consume the church of Christ? The answer is no (Matt. 24:13; John 10:28–29). There will be true believers until the end. The elect will be spared. The faithful will endure, and they shall be saved. Their faithfulness will be rewarded by grace, with a full and glorious salvation for remaining loyal to their God.

1. Compare the warning found in Matthew 10:17–22 with the warning in Matthew 24:9–11. Why will the hatred of the world take place in the days before Christ returns?

1. What does Christ say about what we must face as believers because of his work (John 16:33)?

1. What are some of the forms of persecution listed here?

1. Are the present world conflicts between different political and economic ideologies becoming a conflict between the world and the church? How?

2. What methods might the false prophets use to lead church members astray?

4. What indications are present today that might show that iniquity is multiplying and that love is waxing cold?

5. What examples are present that show the church still exerts beneficial influences on communities?

1. Open Doors, “World Watch List,” which can be accessed online.

This article is a selected lesson from the upcoming book The Unknown Hour, that is to be published by Reformed Fellowship this summer, 2020.

Rev. Jerome Julien, a retired minister in the URCNA who serves on the board of Reformed Fellowship. He and his wife, Reita, live in Hudsonville, MI, and are members of Walker URC in Grand Rapids, MI.