In John’s visions the seventh trumpet has already sounded. Heaven’s choirs are resounding with the songs of victory.

But for the instruction of His people the Lord Jesus supplies what He knows we need. He sketches now, before the consummation of all things is revealed, the course of His church in history. And that pilgrimage will be painful and at times very perplexing. In and through it all those who by faith cling to Him are more than conquerors. This will be their comfort. To close their eyes and hearts to the realities of the intense spiritual conflict in which He has involved them, however, is as dangerous as it is deceptive. No faith can flourish to bear its desired fruit in a never-never wonderland. Instead it will look the facts of history squarely in the face to interpret them in Scripture’s light. 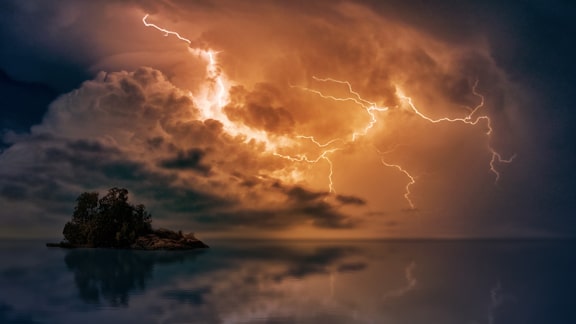 Clearly a section with new perspectives opens here. It includes chapters 12 through 16. And while earlier we spoke of the Lord Christ “controlling” all His and our enemies, now we speak of His “confronting them.”

This arrangement together with the titles need not be taken as definitive; perhaps someone can suggest improvements. They have been chosen rather as “helps,” lest the wide variety of materials found in Revelation flow together in confusing fashion.

Although the sufferings of the true church are described from time to time, the focus here falls far more on the failure and frustration of all who seek to build “the city of man” in defiance of “the city” whose sure foundations and final superstructure are the work of almighty God through Jesus Christ. Hence this material does not follow chronologically what John has already seen and heard and recorded. Rather, that same history is revealed and interpreted in terms of the “conflicts” which spring up in opposition to the Lordship of our Savior-King. This and this alone will provide foundations for a truly biblical life-and world-view. As Genesis opens the story of the sovereign God’s warfare against Satan and sinful mankind, so Revelation catches up this thread as a dominant theme to pursue it to its conclusion. No other sacred writing could so fittingly close the New Testament canon.

Although here John employs the term “seven” only in connection with a few details and the “golden bowls” which pour out divine wrath to the uttermost, we soon discover seven events which demonstrate how God’s foes rise up continually to defy Him and His cause.

In each case those efforts, no matter how seemingly successful for a season, meet complete defeat. His reign, exercised by the exalted Savior who is the Lion and the Lamb, not only controls but also finally crushes completely the rebellion instigated by Satan at the dawn of human history. In these “visions” therefore, announcements of the triumph of our God will resound to cheer believing hearts and lives even in the darkest days. The “facts” are there and must be discerned. But these are not “brute” facts to which men may give whatever explanation happens to please them at the moment. He as the heavenly wisdom “full of grace and truth” has made this known to His servant John and through him to us today.