What terrifying scenes have been recorded for us by John.

The “dragon” is making war on the seed of the woman. Two beasts rise up to carry out his efforts to destroy the people of the Lord. They are so successful that in time, almost without exception, all who dwell on earth will be seduced. And orders are given to “kill” anyone who refuses to worship the first beast.

Who can stand when such an overwhelming avalanche of satanic-inspired power is let loose throughout the world? Undoubtedly this may have crossed John’s mind for a moment, and even more the minds of the first readers of these visions when they paused without passing on to the next scene. Tribulation even worse than the seven churches were experiencing would break out in the future. And today, many believers who fail to follow the story-line of Revelation from step to step, find this writing frightening.

But, and this is the message of the present section, the Lord Jesus is confronting all His foes. Not only has He gained the victory; all the saints living by faith share in this victory even now.

What we have here is a repetition of chapter 7, but with additional insights for all who love and serve the Savior-King. Even in the darkest hours they are “more than conquerors through him” (Rom. 8:37). Nothing can separate them from the love of Christ!

The scene described, vs. 1

Again, a precious consolation for all who read and believe, John sees “the Lamb.” He is “standing on mount Zion.” With Him are “a hundred and forty-four thousand.” On “mount Zion” itself there can be no disagreement. It was in Jerusalem, the place where the Lord God tabernacled behind a veil but always gloriously, among His chosen people. Close by was the seat of government where David, himself a type of the Lord Jesus, ruled in God’s name.

Many will insist on a precise literalism. Some day in the future, when Antichrist rules, Christ will return to establish His millennial rule in earthly form. Then the 144,000—for them these are the Jews out of the tribes—will reign physically and visibly with Him over the earth. But such an interpretation, as noted earlier, creates far more questions than it answers. While claiming that only such a literal interpretation of Old Testament prophecies is faithful to the Scriptures, none of them take all the details literally. In those details there is far too much figurative and symbolical language which be dismissed.

Far less speculative and in full harmony with Scripture is the view that, also here, John “sees” all God’s elect in Jesus Christ still on the earth. And while here, as Paul affirms in Ephesians 1, these elect are “blessed…in Christ with every spiritual blessing in the heavenly places!” True faith, as the closing verses demonstrate, makes them triumphant even in the terrors which, for a time, may assail. And as for “mount Zion”? Let the writer to the Hebrews explain this. He writes of believers living in his day (note the present reality!), “But you have come to mount Zion, to the heavenly Jerusalem, the city of the living God…” (Heb. 12:22f). In every age, also at the end of world history, the Lord Jesus in the fulness of His grace and power, remains with His people on earth. That is His firm promise (Matt. 28:19, 20). Note the clear connection with chapter 7. They have “his name and his Father’s name written on their foreheads.” How safe the struggling church on earth always is and will be according to this comforting vision.

A scene from the Old Testament comes to mind when God’s people were in extreme peril. The Syrian king with his armies had again invaded the land. He was determined to destroy not only the Israelite kingdom, but especially Elisha. As one commissioned to bring the Word of the Lord, Elisha knew all Syria’s war plans beforehand. With many others, the prophet and his servant were shut up in Dothan without any earthly hope of escape. But the covenant God, who never lets His word fall fruitless to the ground, surrounded that city with an innumerable heavenly host. And the deliverance came speedily (2 Kings 6:13f). It is always this way with the Lord’s own. Even the gates of hell cannot prevail against them.

Heaven is never ignorant of, or indifferent to what happens on earth. John hears from heaven a sound like “rushing waters and…thunder.” In his ears it rings like the sweetest music. 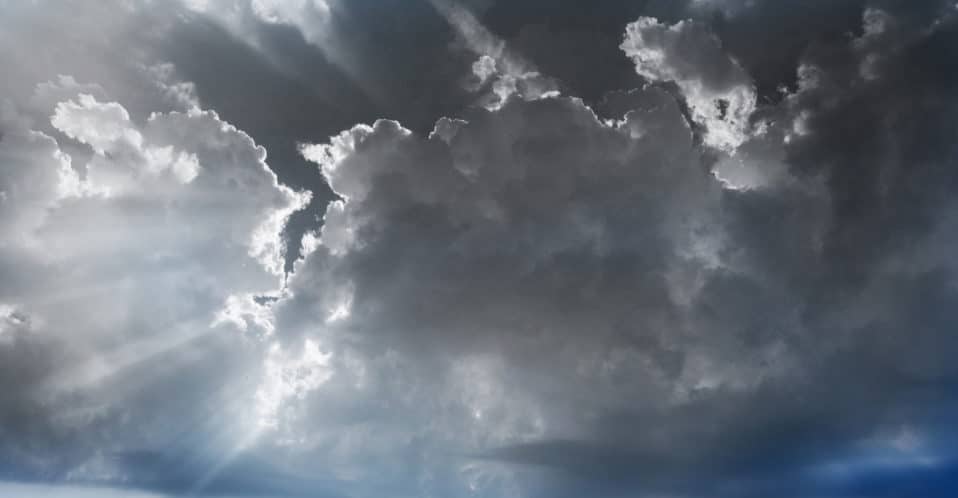 While it is one “sound,” it is uttered by many. All sing the song which only the 144,000 as the redeemed can learn. Its content is not mentioned. Nor is this essential here. It is, of course, a song of victory, of praise to God in Christ who always works salvation for His own. It is sung “before the throne” as well as before the four living creatures and the twenty-four elders. Let us not overlook these “creatures.” They symbolize the “earth” which swallowed up Satan’s venom spewed against the true church.

A word of caution is in order. Some read far too much in the preposition “from” at this point. For them it “proves” a physical rapture of New Testament believers at the great tribulation. But are not all believers, even though not yet perfected, “redeemed from” (i.e. “out of”) the world which otherwise, with ten thousand chains, would enslave them in Satan’s service? Scripture itself leads the way by denominating the church the “ek-klesia,” the ones called out of this world of sin to serve the living God. Reading a physical “rapture” into this passage supports a preconceived theory which separates the Jewish people from the New Testament church.

At first reading, what John now writes may puzzle many. The Jehovah’s Witnesses of course, have their peculiar interpretation. But they are not alone. Others too want to make this an exclusive group. But note well that John provides us with a fourfold description. One aspect is incomplete without the others. And all designate qualities found with every true believer.

First of all, and this may occasion most of the misunderstanding, we are told that these individuals “have not defiled themselves with women, for they are chaste.” Or as some translations have it, “they are virgins.” Does this demand a literal and physical interpretation? Hardly, in the light of all the symbols which are used in this connection, even the “number” as well as the “name written on their foreheads.” And surely, to regard celibacy as a state to be highly preferred to marriage flies in the face of what the Bible teaches (Gen. 1:2; Ps. 127, 128; Prov. 31; 2 Tim. 4:1–4; Hebr. 13:6). The phrase is clearly symbolical. It designates those who have kept themselves “pure” in their love for and loyalty to the Lord Jesus Christ. With this they glorify God in their bodies as well as their souls (I Cor. 6:20), a needed emphasis since the Bible repeatedly associates immorality with idolatry. For them the sin-laden world with its allurements holds no charms.

The following three descriptions corroborate this:

• While living in this world, believers “follow the Lamb wherever he goes.” Faith produces a godly obedience which, looking up to Jesus who is “the truth” in contrast to the lies of Satan and the false prophet, puts His word into practice.

• Characteristic of the 144,000 is the fact that “in their mouth no lie was found, for they are spotless.” Here very clearly the pattern of their lives is set off against the multitudes entranced and enslaved by the “lies” of Satan and his confederates on earth.

Is the apostle endorsing a kind of perfectionism? Certainly not, for this would be contradicting himself and the rest of Scripture. In his first epistle he affirms that the new nature born of and indwelt by the Spirit, does not sin. Prior to that he also states, “If we say we have no sin, we deceive ourselves, and the truth is not in us” (1 John 1:8). Both are equally true. In life-union with Jesus Christ who is also our “sanctification,” we are “holy unto the Lord.” At the same time, as believers we are exhorted to “work out (y)our own salvation with fear and trembling.” This is the “war” which always goes on within ourselves as long as we are still in the body. Cutting the proverbial Gordian knot by denying either one of these revealed truths, is as unrealistic as it is unbiblical.

Here we should hear the call to sincere self-examination. Neither the shallow optimism of the perfectionists, nor the pessimism of those who only bewail their sins, can learn to sing “the new song” of the 144,000.

1. Why did our Lord prescribe this section for the struggling church on earth?

2. Compare this passage with what is found in chapter 7.

3. Why is the name “Immanuel” such a strong comfort to us on earth? Why do many church members seem to take our Lord’s promise of His abiding presence so lightly?

5. Have you any idea why the content of this song isn’t included here?

6. Do you think that the “harps’ are physical realities here?

7. Discuss the importance of “the four living creatures” in connection with Christ’s reign over the earth.

8. Why is it outright “heresy” to esteem marriage as spiritually inferior to celibacy?

9. What is the serious error of the perfectionists?

10. How does Christ’s perfection, both as justification and sanctification, become ours to experience and enjoy even now?