Without pause John introduces us to another beast, totaling two. Two, often in Scripture, indicate companionship and cooperation. And these, both under Satan’s influence, are not rivals competing for attention. Rather, they are preparing the way for “Babylon, the great whore” of chapter 17. Anti-christian civilization, always present incipiently from the beginning, will in the last days attain full development. These two then, stand in sharp contrast to “the two witnesses” in chapter 11.

The “war” against the Lord Jesus Christ is in full swing. Satan refuses to surrender. Not for a moment will he be caught napping. By him antichristian forces are set in motion. And these powers—the two beasts—seem invincible; their cunning is well-nigh inescapable in its deadly effects.

Everyone, already in John’s day and ever since, is faced with the choice which is presented as clearly as possible. The choice is an either/or issue; a matter life or death.

Our Lord Jesus Christ summons us to such commitment. He is not like Satan who, lurking behind the scenes, deceives with flattering words. Instead, the Savior-King is by “lukewarmness” (ch. 3). Only those will “safe” in the age-old conflict who can testify:

My hope is built on nothing less Than Jesus’ blood and righteousness. I dare not trust the sweetest frame But wholly lean on Jesus Name. On Christ the solid Rock I stand; All other ground is sinking sand!

Terrifying as the first beast is, he (the symbol is a personification) needs the second beast to support him in his totalitarian ambitions. And this second one to all appearances is far more clever and cunning; hence far more deceitful. Multitudes have been, and are falling, and will continue to fall under his bewitching spell. 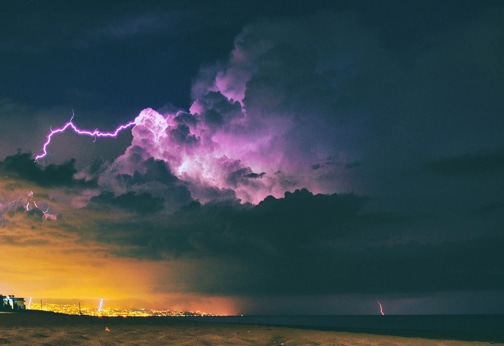 This beast arises “out of the earth.” This seems to make him less fearsome and mysterious. Actually John sees him with only “two horns” instead often. Even more, this makes him “like a lamb.” Likely the thought behind this is that of imitating the Savior, who, as the Lamb of God, came to take away the sins of the world (John 1:29, 36).

But let no one be deceived. This beast “spoke like a dragon.” Actually in all his speaking (for this is the method he employs) he follows the arch-deceiver of mankind. He will promise peace and prosperity—with every imaginable benefit to those who submit—to the power ofthe first beast. In fact, “he exercises all the authority of the first beast in its presence.”

What we have here, so it appears, is the great propaganda machine which keeps the growing civil authority among men in power. Often, also because later the beast is identified as “the false prophet” (ch. 16:13; 19:20; 20:10), many find here a false religion, or more specifically, the papacy as in Reformation says, or liberalism and liberation theology in our times. And, whIle such views are not as far-fetched as some suppose, we believe that propaganda of every sort (every view and theory is “religiously rooted”) is intended here. Look, for example, at how education, business, the arts, the media, agricultural and environmental and even medical societies all make their pitch for state aid while allowing for its encroachments. All these, some more knowingly than others, have a view of life and the world which undermines the claims of the Lord Jesus Christ. Many of these speak smoothly. But increasingly all oflife falls under political control to pave the way for totalitarian governments. So insidious is the influence of the propaganda machine ofthe second beast that, unless believers stop being naive, they can be swept away for a season.

Now the close connection between the two beasts is clarified. With the power and authority given by the first, the aim of the second is to make earth’s dwellers “worship the first beast.” Healed from its “deadly wound”, it appears invincible as well as uncontrollable. High honors must be paid to it instead of to the Lord of heaven and earth.

To that end, the second beast works “great signs” (semeia, a word used often for miracles). All these are in sharp contrast and contradiction to those accomplished by God. And these are much more than tom-foolery. Remember the magicians in Pharaoh’s court and those who lived in Daniel’s day. So too, in Jesus’ day exorcists cast out demons. All this show of power seems bafflmg to us. But clearly they are part of Satan’s war against the cause of the Lord (Mark 13:22; 2 Thess: 2:9). Even making fire come down from heaven is mentioned by the apostle, although nowhere is it said that this works destructively. The aim is to impress people everywhere. Within the framework of the created order, things undreamed of earlier are also now being accomplished. Such wonders are done “in the sight of the first beast.” And these sway the minds and hearts of multitudes.

This beast “ordered” the people to set up an image of the first who had been healed. For this power was also “given” (by Satan’s insplration, of course) “to give breath to the image of the beast so that the image… should even speak.” In John’s day this was not at all surprising. Many “ldols” in several lands were fashioned with mouths through which, unseen by their worshipers, priests spoke! And when Antichrist appears on the scene for which both beasts prepared the way, there need not be a physical idol as in Nebuchadnezzar’s time, but surely some from through which he, as supreme ruler on earth will speak his blasphemous words (cf. 2 Thess. 2). One commentator appropriately summarizes this:

When the priests of Antichrist have thus. animated their idol (making it appear alive and able to speak), they have acted a blasphemy exceeding that of all previous idolaters; this is the magician’s most Impressive usurpation of God’s power.

Our generation has witnessed something like this in the godlike acclaim given for a season to Hitler in Germany, and to Stalin in Russia. Those too, were “signs of the times” which many failed to discern.

All earth’s inhabitants (true believers excepted as chapter 14 will assure us) offer “worship.” Today we note more modem and refined ways of accomplishing this by way of the media, military parades and rallies. But the goal is clear. Man is to be enthroned. By means of all kinds of human accomplishments man shows that there is no longer room for the one true God and the Lord Jesus. The peoples have hardened themselves against the gospel so that seeing, they can no longer see and understand. One world demands one leader with one religion, the worship of Man as the captain of his own soul.

And with that, orders are given to kill all who will not bow down in worship. John’s thoughts too, may well have gone back to that image which Nebuchadnezzar raised up for his personal glory (Dan. 2).

This second beast is exceedingly clever. He causes a mark to be affixed on “the right hand or the forehead.” No one can buy or sell unless he wears it visibly. John says: “The name of the beast or the number of the beast… is 666.” And, says the apostle, “It is a human number.” So many explanations have been suggested throughout the centuries that books could be filled with these. One of the better ones is that the apostle borrows this as a figure from the custom ofbranding slaves with the name or number ofthe owner. As Christians should openly acknowledge and demonstrate their baptism in the sight of all, so the world will clearly, in the last days, show its complete allegiance to Antichrist. In other words, true believers will then be clearly distinguishable from Antichrist’s followers, and be economically bankrupted to the point of starvation and imminent death. Further than that we dare not go with this “mark.”

Now the encouraging application. Here, “wisdom” is proclaimed by the apostle. It consists ofthe manner in which sound knowledge and understanding are to be practiced. That gift comes from the Lord Jesus, our “wisdom” (I Cor. 1:29), who imparts His Spirit to guide us each day anew into His ways even in the most perilous of times.

Nothing is said here about the end of those who, with Antichrist and his propagandists, have fallen into Satan’s snares by worshiping human power and achievements instead of God. All that will come. as the world wallows in its deliberately chosen wickedness, we take heart and sing with the psalmist:

All those who wander far from Thee will perish in their misery; Thou hast destroyed the carnal-hearted, who from Thy covenant ways departed. But unto Thee, my God on high, Tis good for me that I draw nigh; I’ll trust Thee, Lord, through all my days And publish all Thy works and ways (ps. 73).

Such is the “wisdom” which Jesus gives to all who live and look for His appearing.

1 . Why does the first beast need the second? Be specific.

2. Why is double-talk always devilish?

3. Mention several kinds of propaganda which appeal to and influence the masses today.

4. Why is faithful Bible reading and study in the homes essential for a strong Christian faith?

5. How do both true and false teachings always demonstrate their effects in deeds?

6. What kind of propaganda machine can you find in your nation? Is it effective?

7. Can the state and its officials ever be Iineutral” with respect to religion? Explain.

8. Is all sorcery, magic and fortune-telling, satanic? Why did God strictly forbid dabbling with it?

10. Can you demonstrate by facts that liberalism and pleading for tolerance in the churches always show themselves intolerant as soon as they are in control?