Ever since Plato’s day philosophers have been dreaming about a “Utopia.” All of them look for a “new” world with everyone enjoying peace, plenty and prosperity. Men need only unite in offering homage to science, evolutionary development, progress, brotherhood and—above all else—the spirit of democracy.

To such dreams Holy Scripture gives the lie. Wars have been endemic throughout history. From the beginning people have been at odds with themselves and others, because they are at odds with the sovereign God. From this they cannot extricate themselves. Only God’s salvation accomplishes it through the Lord Jesus Christ as the angels sang of it over Bethlehem’s fields:

Glory to God in the highest, and on earth peace among men with whom he is pleased.

Thanks be to our God! The victory by which our peace has been secured is an accomplished fact. When “the dragon” could not murder the “man child,” he was in principle defeated. For associated with that defeat was also, according to the vision which John records, expulsion for him and his confederates from the heavenly regions. Only his last-ditch stands on this earth remain. Here with his hosts he will for a season carry on murderous attacks. More will be revealed in the visions still to come. But already the heavenly choirs are singing victory songs for the consolation of the struggling saints below.

To that decisive battle our attention is now drawn. 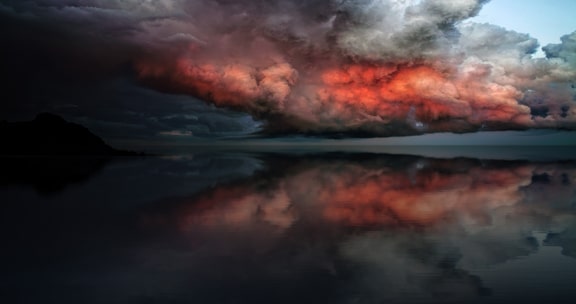 Two armies, according to the apostle, are ranged against each. Both involve “spirits,” beings created by God with powers far superior to those which mankind has received.

This battle takes place “in heaven.” Usually we think of this as the place of perfection into which nothing sinful can ever be found. But remember, heaven too has its history. Here rebellion first arose among the angelic host. Here also a decisive battle takes place.

Both armies consists of these beings. The “good” retained their original perfection in obeying God. The “evil” under Satan’s instigation fell from their high estate by their rebellion. Already a hint of this is found in earlier verses. The dragon had “a mighty tail” with which he “swept away a third part of the stars of heaven” (vs. 4). Clearly these are not the heavenly bodies ordained on the fourth creation day by God to provide light. Rather they are those heavenly hosts who, according to Job 28:7, sang together for joy when this earth sank upon its foundations.

All these spiritual and superhuman beings were created perfect. On that, Scripture leaves room for no doubt. Toward the close of the creation-week God Himself pronounced all that He had made “very good.” But sinful rebellion raised its ugly head in heaven. Although we should be warned against undue speculation, information of a most significant kind is provided by two prophets. Isaiah in chapter 14 denounces the sins of Babylon’s king; Ezekiel in chapter 28 those of the prince and king of Tyre. But behind each lurks a sinister figure whose rebellious aspirations and expressions can only be those of Satan himself. And the Lord God Himself, so the prophets declare, will cast him down completely.

Why in the light of such assurance is there a conflict in the heavenly regions?

Here again God’s Word shows the way. When some of the angels fell into sin, they by no means lost the powers with which they had been endowed. From time to time they continued to have a measure of access into the heavenly presence of God Himself. In Job 1 we are told that Satan appeared before the throne of God to give account of his whereabouts and work. So, too, Micaiah in a vision sees an evil spirit who suggests to the Almighty how Ahab can be destroyed (1 Kings. 22:19f.). And centuries later Zechariah receives a vision in which Satan accuses Joshua the high priest “before the angel of the Lord” of wearing “filthy garments” while performing his official duties.

To that state of affairs an end comes, when the man-child is “caught up” beyond the devil’s reach. The full price for the sins of God’s people has been paid. The power of death has in principle been broken. No accusation can any longer be laid against the elect (Rom. 8:33, 34). And with this, any entrance into heaven, where for long centuries charges were laid against the believers because of their sins, was barred against Satan and his demonic allies. The Lord God will no longer listen to them.

Therefore this battle. The charge is led by Michael, the archangel, mentioned in the Bible as a chief guardian of God’s holiness and glory. With him he has an innumerable company of good angels. Satan as “the prince of the power of the air” (Eph. 2:2) has with him also a mighty host. And the two armies clash in mortal combat. Without it the story of our redemption would be quite incomplete. John is given to “see” and record it for the comfort of the saints on earth.

Of the battle we know little more than the outcome. It was, of course, not fought with physical and earthly weaponry. Angels, both good and bad, are spirits. They have no bodies such as ours. Often they did appear in visible form to people on earth. This was possible only when they assumed some kind of visible form. Thus the devil appeared in the garden as a “serpent.” Angels, including our Lord Christ before His incarnation as “the Angel” of the covenant, also took on visible form to bring messages from God to men. But of taking on such shape and form we do not read here. Nor was this necessary, since no direct manifestation is made to people.

Although these beings are spirits, weapons are at their disposal. And these are spiritual. For the demonic host this is always the “lie,” a perversion of truth. For the good angels only and always the Word of God. For this we have more than a passing hint in Jude vs. 9. Michael is there introduced as “disputing with the devil about the body of Moses” The background is well known. Moses dies on mount Pisgah. The devil would claim his body, since this servant of the Lord was guilty of many a sin. But he with his body belongs to the God of the covenant. Therefore the archangel “disputes” with the foe but without bringing “a reviling judgment.” With appropriate restraint but invincible power and effect he simply declares, “The Lord rebuke you!” So, too, be it in symbolical imagery, the heavenly host, by announcing the victory through our Lord Jesus Christ. allows no room for Satan and his host to bring accusation against the elect in the heavenly courtroom.

Christ, having been born, suffered and died, and thereupon raised victoriously from the dead has been “caught up.” The inescapable consequence for this is that Satan and his host are “thrown down.” No longer can accusations against “the brethren” be heard above. Believers of all ages have been justified by faith freely and fully in Christ. Indeed, the evil angels will continue their “accusations” on earth among people and even in the conscience of the godly. But for them heaven’s door is irrevocably closed.

The weapon of the evil angels? None other than the “lie.” For what they refuse to believe, what completely exceeds any comprehension on their part is that Christ and His own are one! All they recognize is the presence of sin in the life of every saint. They refuse to acknowledge the grace of God by which the perfect innocence, righteousness and holiness of the Savior is imputed and freely given to all who trust in Him. With this all their “claims” to God’s people have been canceled.

That’s what this battle was all about.

Decisively has Michael together with his allies gained the day.

Satan with the evil angels “lost their place in heaven.” In fact. they are “hurled” (note the strong term) to the earth. Lest there be any question as to who the leader of the opposition was, four names are given him: “serpent” reminding us of his approach to Eve; “devil” which is slanderer or accuser; “Satan” as the adversary of God and His people; “the deceiver of the whole world” who by lies leads the peoples of the earth astray. Soon much more will be told us about how he works.

Meanwhile anthems of victory resound throughout the heavenly courts. First comes an announcement. The decisive battle has been won in the person and work of Jesus Christ. The “voice” is prophetic. Here present reality and future consummation are seen as one. Already now “the salvation and the power and the kingdom” of God have come. Also “the authority of Christ” is fully assured. Nothing can in any way hinder or prevent the fulfillment of all God’s purposes with creation. So, too, because “the accuser of the brethren has been thrown down,” all the faithful already in heaven can sing their song of praise and thanksgiving.

But this is not the end of the story.

“Woe” is also announced to “earth and sea.” Fearful happenings will disturb both earth and sea with the casting down of Satan and his host. The “devil” will concentrate all his energies on both as he seeks to carry on his fruitless warfare against the Lord God and His Christ. His attacks will be filled with “fury” aroused because of the irreparable loss which he and his cause have suffered. Much of his power has been stripped from him All he can do is vent his malignity against the sovereign God on the earth and its dwellers. That will be the further unfolding of the drama of world history from the day of our Savior-King’s exaltation.

1. Show how many non-Christian religions still take good and especially evil angels seriously. How would you account for this?

2. Explain why faith in our Lord’s resurrection and ascension are as essential to salvation as in His substitutionary atonement.

3. What does Ezekiel 28 teach about Satan’s original rebellion?

4. Why will and cannot the devils be saved?

6. Why does Scripture give so many names and titles to the chief devil?

7. Of what help is it to remember that in the Hebrew language the term for word and deed is the same?

8. Discuss in some detail Jude vs. 9. Why did Satan want Moses’ body?

9. Who alone can and will “overcome”?

10. Why do you think God in Christ gives Satan so much lee-way?