Often we are amazed at the overwhelming beauty in creation. Here are majestic mountains and surging seas; fertile fields and forests and flowers which grace our gardens. But this is only one half of the story.

Soon we discern deterioration caused either by natural catastrophes or human activities. Every day we see signs of neglect, of careless use of the soil, of plundering earth’s resources which the Creator provided at the beginning. Mud slides sweep downhills which are robbed of their protective covering. Aquifers dry up because of over-use by agricultural or commercial exploitation. Streams, rivers and even oceans are being polluted by toxic wastes. In all these people suffer, sicken and even die. Man, called by God to be a conservator “to tend and keep” the earth, has become its despoiler. Much of this results from human greed carefully cloaked in pious argumentation. But this, too, is only one part of the story.

In everything believers will see the almighty hand of God. He sends blindness of heart and mind. He also unleashes powers which destroy what exist to unusual degrees. To the unbelievers these are no more than “natural” happenings which can’t be avoided. To the believers they are the beginnings of judgment against men’s sins. And these increase, until finally the “golden bowls” are poured out with the fullness of his wrath. In this way the “seven trumpets” lead up to those bowls.

As with the seals, the first four trumpets are bound together. Without trying to comprehend every detail, in how far each is symbolical or not, let us concentrate on the scenario to learn again that God never lets sin go unpunished forever. 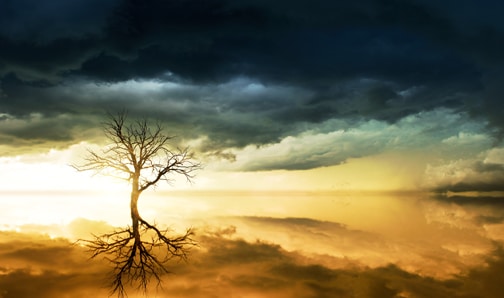 The first trumpet, vs. 7

Strange, indeed, are the words used here. “The earth” is the world in which we all live. “Hail” and “fire” and “blood” as well as “trees” are tangible realities. But the combination found here is unusual.

Have you ever seen “hail and fire mingled with blood?” When the first two are mixed, surely the ice will have to melt. But this does not happen now…Then, too, “one third” of the earth and trees are consumed, while two thirds remain unscathed. “All the green grass” (“chortos,” which may include herbs and small shrubs) disappears. God surely can do precisely this in a physical and visible way as well as all at once. But is this what John wants us to know? If so, endless questions will soon spring up to vex our minds.

While disavowing all “allegorizing” here, let a few past explanations sound a warning. Some have argued that “hail and fire mingled with blood” describes heresies found in John’s day with the “trees” being the false teachers. But where does the Bible ever picture false prophets as “trees?” No better is the notion that these “trees” were emperors who persecuted the early Christians. Do we ever read that fire fell down to consume them?

Far better to acknowledge that these are, indeed, very real events with devastating effects but described as a composite symbol for our Lord’s judgments. Natural forces are used but in a supernatural manner. So astounding are these events that we can scarce take them in as we read of floods and fires and winds which destroy large parts of the world with its people. Notice, too, that here is “one third,” somewhat larger than the “one fourth” mentioned earlier. (6:5) As time passes, so John reminds us, do divine judgments increase. All this, as the first angel throws the burning incense down, comes from Christ as the Lord of history who opens the seals.

The second trumpet, vs. 8

Now the apostle sees “something like a great mountain, burning with fire.” It, too, is “thrown” down from heaven. Here must be much more than a single volcanic explosion like Vesuvius in 79 AD.

While the first trumpet affects the earth, this one is poured out on “the sea.” Although “sea” will later be used to describe symbolically the nations and peoples in constant agitation, here it points to natural catastrophe. It reminds us of the first plague to strike Egypt. (Exod. 7:20f.) Now “one third” becomes blood. Unnumbered living creatures as well as a like number of ships are destroyed. While oceans separate nations, they are also highways of communication, transportation and commerce. Hence we need no allegory here. In the apostle’s day Rome as a city would soon perish without regular shipments of grain from Egypt and north Africa. So much is impeded in our day when ships founder in storms. Who can count the fish, seals and whales tossed up on the shores to die unexpectedly or the ships whose wreckage lies deep below the waves throughout the centuries since Christ ascended to assume rule over this world? In all these we see the work of our God as He warns mankind in a wide variety of ways. Here is room for neither chance nor fate.

Again something that may well baffle us. We read that “a great star” falls down from the sky. It is also “burning like a torch.”

Some have identified this with one or another Roman emperor. Others call attention to Satan whom Christ saw “falling down” from heaven. Not a few insist that such a star will fall exactly in this visible form at some future time. Although it “blazes,” it does not dry up the “rivers and springs of water.” Instead, as ‘Wormwood” (a desert plant with a very bitter taste) it turns these: “bitter,” undrinkable. Only a “third part” is affected. But “many people,” says John, die as they drink.

One writer, misled by extreme literalism, adds that this “star” shatters in ten thousand pieces to fall on streams and rivers in many parts of the world. But John says nothing like this. Beware, then, of any kind of explanation which does not explain because it goes beyond Scripture which is always clear enough to explain itself. Indeed, here we are told that waters — without which people cannot live — will be in large measure polluted. And how real that is becoming in our day. Most of this should be recognized as man reaping the fruits of his selfish and wicked ways. Such dislocations within creation stem from his willful unbelief and ungodliness. But the results are at the same time God’s judgments He gives people what they rightly deserve. Whether in this judgment believers will also suffer is not mentioned by the writer.

Again we should be careful with our explanations. Here is another judgment. One third of humanity is affected and afflicted as the light of the heavenly bodies is turned into darkness. Because of man’s sin the creation lies groaning under a curse. (Gen. 3:17,18; Rom. 8:18f.) This “home” of ours is becoming an increasingly dangerous place. What happens with sun and moon and stars has profound consequences for the world and its inhabitants.

In various parts of the earth the sun sometimes does not break through for weeks and months on end. Then fields and fruit trees fail to yield their increase. If accompanied by incessant rains, as in Ireland during the 1840s, potato blight takes its toll with people sickening and dying by the tens of thousands. Volcanic explosions, too, often send showers of debris and dust to darken our days. All these seem so “natural” until we remember the One who sits on the throne and calls his angels to sound their trumpets.

This section closes with an alert. It is sounded by “an eagle.” Our God can and does use his creatures as it pleases him. And they always do his will as did Balaam’s donkey and the fish which swallowed Jonah. John writes that he actually saw its soaring and “heard” its triple screaming. And that should suffice for us, lest we make this prophet of God a liar. Warning is announced of worse things still to come with the trumpets. Even then, the end is not yet.

Likely the above explanations may disappoint you somewhat. Are the above purely physical or purely spiritual? We refuse to draw any sharp line between the two, also in the light of what follows. Those two aspects of human existence are too intimately bound up with each other to allow for any sharp divorce. But the lessons are clear. The Lord sends judgments. They are his “call” to one and all. He is gracious enough to explain them in so far as we are able to comprehend. With his creation He can do all his good pleasure. After all, He is the One who has made and still upholds everything and everyone. In all this Satan and his demonic associates also play their part but under his control. And mankind brings these disasters in large measure upon itself. But in and above all these “secondary causes,” real as they are is the Lord God who through the exalted Savior-King carries out his eternal purposes. No believer ought question for even a single moment that his judgments are true and righteous altogether.

1. Find parallels between the first four seals and trumpets.

2. Show how “one third” demonstrates the Lord’s restraint in sending judgments. Why does He seem at times to move so slowly against wicked men?

3. Why and to what extent does creation still lie under a “curse?”

4. Should Christians be “good environmentalists?” What about our throw~aways, clothes, backyards, junked appliances, cars and such?

5. My grandmother said that in thunder the Lord speaks; in lightning he shows something of his presence. What do you think of this?

6. How much of this vision do you regard as physical and literal? Why or why not?

7. What is wrong with “spiritualizing” all this? What wrong unbiblical view of God and the world is held when this is done?

8. If God is entirely in control on what basis would you defend man’s responsibility as well as Satan’s involvement?