Here the writer introduces us once more to the angels. From them we can learn much about how the Lord God delights to be served. Far too often our Christian lives are one-sided.

In a devotional book, much esteemed a century ago, Abraham Kuyper wrote about “three little foxes” who often despoil the vineyard of Christian spirituality. Some believers, he judged, preoccupy themselves almost exclusively with the mind. Their sole interest seems to be in defending doctrinal orthodoxy. Others are too much swept about by their emotions. They seek to withdraw themselves from life’s hurly~burly to find solace in meditation, prayer and even faintings. And then there are those so “busy for the Lord” that they take little or no thought for a closer walk with Him. All three aspects have a legitimate place in the believer’s life. And a whole-some spirituality seeks to cultivate each in relationship to the other two.

Christians should know themselves as “anointed by the Spirit” who conforms their lives to that of the Lord Jesus Christ. As “prophets” they are to confess the truth; as “priests” to sacrifice their lives in loving obedience to the Savior; as “kings” to fight against sin within and around them and so begin to “reign with Christ” already now. In such triple service the angels engage consciously and consistently. They speak only what God instructs them to say. They offer up their being to carry out His will. They wage war at God’s command against the devil and his confederates while ministering to the believers in their struggles. In this respect, too, they are our examples.

Soon the trumpets will sound. Their reverberations issue into events which reveal God’s anger against sin and sinners. The number “seven” indicates their completeness. And these angels “stand before God” awaiting their orders.

The significance of the trumpet must not be over-looked. Long before the flood men fashioned instruments which produced sounds of various kinds (Gen. 4:21). In time these played important roles in Israel’s life and worship. We read of stringed instruments, of cymbals and loud-crashing cymbals. But none were as important as the trumpets.

The first of this kind was simply a ram’s horn without a mouthpiece. Later it was developed in several forms. The call was crisp, clear, and even piercing. It called all the people to the solemn assemblies (Numb. 10:3). to continue the pilgrimage(Numb. 10:8). to gather for the high and holy feasts (Numb. 10:10). It also summoned them to warfare against the Lord’s and their enemies (Numb. 10:9). John now “sees” the trumpets as they are used to carry out Christ’s orders. Thus he can describe the sounding with their results in terms intelligible to us. We are reminded by this that judgments are never unleashed without previous warning. Of this Amos, too, told Israel,

Deep within men’s hearts is still an awareness that judgments bring destruction and death in their wake. All have eyes and ears; all have a consciousness of some higher being over whom they have no control. Only by deliberate unbelief can they crush this within themselves. And as they do, they remain fully responsible. Never may anyone accuse God of injustice.

Another heavenly being now appears on the scene. The “censer” was frequently used in worship at tabernacle and temple. Only those officially consecrated were permitted to handle it (Exod. 30:34, 35; Lev. 10:19). It was a kind of bowl, perhaps quite deep, into which incense prepared from fragrant herbs and spices was placed. When kindled, its pleasing aroma filled the worship center to ascend to God in heaven. It accompanied but was not identified with prayers. Here the “saints” also stand before the throne, while earlier they were under the altar. John does not feel any inconsistency as he writes. Both descriptions are true, each intended to bring us a distinctive message. Prayer, too, is a kind of “work” exercised before the face of our God. 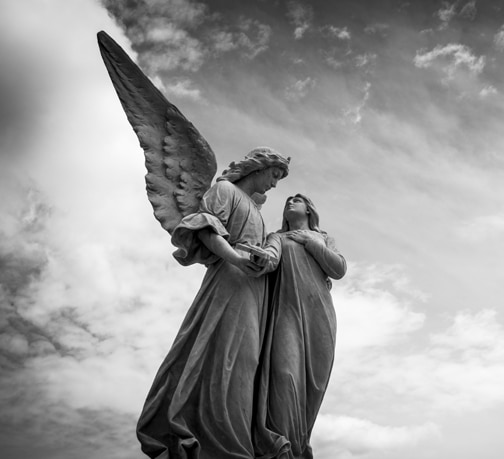 This angel “stood at the altar.” From it must come the “fire” which will cause the incense to smoke and burn.

This is a distinctively “priestly” work. But let us exercise a bit of caution in drawing our conclusions. Although he is wafting the saints’ prayers to the One on the throne, he is not an ordinary angel who can make intercession for us. For such intermediaries the Bible provides no evidence Rather, this angel may well be the Lord Jesus Christ, the angel of the covenant who is also the fulfillment of the altars of burnt offering and of incense. The epistle to the Hebrews insists that He alone is our high priest (9:11), our sacrifice (9:26), and our altar (13:10). But by using Old Testament symbols to depict heavenly realities, the Lord Jesus through His apostle makes the message as clear as possible. He is the One who takes the fire to kindle the incense. Through Him the prayers of the saints are being fulfilled.

Thus the meaning is transparent.

The prayers of God’s people are powerful and prevailing, also when pleading that His honor be upheld in the face of the vicious wickedness of mankind. But to be well-pleasing these prayers must be sanctified by the Savior Himself. Only so will they be heard, accepted and answered in full.

As soon as the censer is filled with “fire from the altar,” the angel “threw” it to the earth. Immediately that action began to produce results. Once more the church in John’s day and ours is to rejoice in the everlasting power and divinity of the One who does all things wisely and well, also in sending judgments. None of these are accidents in the course of world history. Nor should they be thought of as unexpected. Clearly have they been prophesied from of old. Only stubborn unbelief closes its ear and mind to God’s warnings.

“Noises” are heard at once. “Lightnings,” common throughout the world, terrify. People and beasts are often killed by these forces. Forests and fields are set aflame to wreak widespread devastation. In the “thunderings” people should hear echoes which sound warning. Keep in mind that scientists cannot predict with accuracy, much less stop an “earthquake.” Even its aftershocks are dreadful. Although these are natural calamities, they are under Christ’s control to do His bidding, as these angels sound their trumpets and fire is thrown down on the earth. He is the One who shakes the earth’s foundations, so that men may learn to tremble when He arises in judgment.

1. Can you give a clear Biblical description of angels?

2. Why are people so preoccupied with demons, while ignoring angels? Who in Jesus’ day denied the existence of these beings?

3. Give some Old Testament and New Testament examples of angels doing prophetic work.

4. How would you describe a well balanced Christian spiritual life?

5. Why do you suppose the doctrines of angels and judgments is so much neglected in churches today?

6. Does God ever answer the prayers of the wicked? Give Biblical evidence for your answer.

7. Explain the three texts from Hebrews listed above. Why are these so important for understanding the way of salvation in Christ?

8. How does God give us our orders today?

9. Do you think there are more natural catastrophes now than 100 or 500 years ago?

10. How and when can scientific discoveries strengthen our faith in God’s work? How and when do they attack it?