Few passages in Scripture seem as surprising as this one. Here throughout the heavenly courts silence reigns.

Hardly would we expect this.

Heaven, so the Bible teaches, is the place of ceaseless praise. All the angels with the living creatures and the saints, sometimes successively and then in unison, raise their voices to glorify their God and Savior. All the issues of creation and redemption are firmly in His control. Not so much as a hair can fall undetected from a saint’s head; not so much as a wind can stir the treetops apart from His will. Safe “in” all the tribulations of this age. Safe also “above” and “beyond” their reach are His people. No wonder all sing, loud and long in heaven. 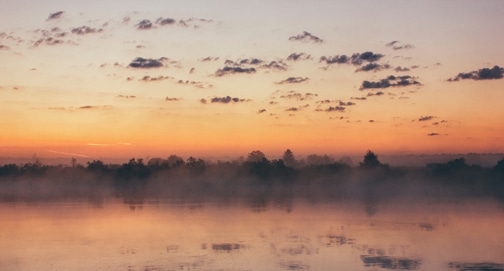 But now comes the surprise. As the seventh seal is opened, quiet envelops one and all.

On earth neither man nor beast can live long without it. For that reason the Creator has ordained days for labor and nights for rest. Especially in the latter we hope for some silence, for a few hours of uninterrupted sleep to refresh body and soul. Even during the day we need some silence, pause to catch our breath before proceeding with those activities which still demand our energies. And for strengthening the ties which bind us to the covenant-keeping God, we need this. Of it the psalmist sang,

My soul in silence waits for God; My Helper He has proved. He only is my rock and tower; I never shall be moved… (Ps. 62).

Only so can we find strength and courage to confront the foes which seek to overwhelm us. But such attacks are foreign to heaven. Victory there is fully assured. Why, then, this silence?

Since it is so significant, let us spend an entire study on this one verse. Well may it have more to teach us than we first suspect.

When is this silence?

The occasion is decisive. John says it happens when the Lord Jesus “opened the seventh seal.” Just what is to happen is not yet revealed here. But clearly another forward step in the unfolding of God’s eternal plan is taken. And the dwellers in heaven realize this.

Eagerly have they been made aware of the opening of the first six seals. Each time, and in rapid succession, what had been determined and written down was being carried out. Although some time-sequence is indicated, we misinterpret the events when we isolate them from each other. Nor is each a single event. These are executed but with ever-increasing consequences throughout the period from Christ’s ascension to His return. Clearly there is overlapping. While the first four occur, the “souls under the altar” engage themselves in prayer for vindication. And while the sixth seal brings us far closer to the great Day of days, its roots lie in what was accomplished by opening the first four seals. Even then the wicked cry out for a way of escape. But their cries will increase as they realize that their condemnation is drawing nearer. No stability on earth will remain. John mentions that even “the sky receded like a scroll.”

The time for silence then? The season of that “seventh sea!.” when heaven and earth together are poised on the boundary between time and eternity. While multitudes still go their merry way for a while, heaven waits in breathless wonder.

What, then, is this silence?

John announces its length, “for about half an hour.”

Of course, this silence can hardly be applied to our God and the Lamb. We do sometimes read that He seems to keep silent when His people pray. But that views the matter from human perspective and experience. Here a reality in heaven is stated. And were the sovereign of the universe actually silent for even a brief span, all of the created order would pass away into nothingness. By the eternal Word everything was created; by that same Word does it continue in existence (John 1; Col. 1). Rather, here we find silence on the part of every creature before the throne on which the All-ruler sits in ineffable splendor.

All songs and shouts of praise have ceased. All the angels appear to be struck dumb. No cry of any kind issues from the four living creatures who, according to Revelation, engaged in an endless activity. A hush has fallen over all who had been so busy with their praises.

And that for “about half an hour.” John does not spell this out with clock-like precision. But the profound reality is inescapable.

In Scripture “an hour” usually stands for a comparatively brief span, far shorter than a day or a week or a year. Thus “half an hour” indicates a very brief period. No explanation or even allusion to why this is so short is provided. We will have to let this “mystery” stand for what it is. But that something happened or is about to happen to occasion this profound response of silence cannot be denied. Is it surprise or shock which we as earth-dwellers experience when something dreadful happens? Also here we need to exercise restraint. We know far too little of the psychological responses of those in heaven to assert anything emphatically.

Why is this silence?

Yet the question need and should not be completely shoved aside.

Commentators have made a variety of suggestions. Many of these we can pass by. But that this silence should be connected with the prayers of “the souls under the altar” seems unavoidable. They were told to wait patiently for a while. But now, so it seems, those prayers are about to be answered. The season of their vindication is at hand. Pause, to be sure, as their requests ascend like sweet-smelling incense to the throne. Now another kind of pause before the heavenly dwellers can take in everything that is happening.

This idea need not be dismissed. But more also seems to be involved.

Silence among the children of men often expresses “awe.” Something amazing then transpires before our eyes. We often feel we cannot take it in. We need to catch our breath while attempting to come to grips with a surprising reality. So as God’s eternal purpose is about to be fulfilled in increasing measure, such a half hour in heaven is not out of place. And in ways past our finding out, those in glory know far more of what is happening and will be happening in this world than we. No longer is their vision as dimmed as ours. Their perspectives have undoubtedly been immeasurably enlarged and enriched. Still more, their eagerness for the vindication of God’s holiness and justice is far purer than that of even the most spiritually sensitive saint on earth.

Events in the form of divine judgments are about to be accomplished by the Savior-King. Soon men will gnash their tongues in agony. Mighty cities and empires will crumble into dust. The foundations of earth, relatively stable since Noah’s days, will be thoroughly shaken. Nothing in the created order will ever be the same again. And all this is for the manifestation of our all-glorious God.

As we reflect on this brief verse, the “pause” which lasts such a brief span in heaven should also stimulate us to “keep silence” from time to time as we continue this study of Revelation and contemplate the mighty works of our sovereign God in the course of earth’s history.

1. How can we recognize a kind of time-sequence without denying clear parallelisms in John’s visions? What is wrong with trying to find precise chronology?

2. Why is the transition from the sixth to the seventh seal so decisive?

3. How can we glorify God by our silences?

4. How does silence for us contribute to “healing” for mind and heart?

5. When can our silences be very God-displeasing?

8. Why do we often fail to be “awed” that God hears and answers our prayers?

9. Why is Jesus called the “Word” in so many passages? What does He do then?

10. When, how and why should we call to our children’s attention that God is active in every event, the small as well as the great, in and around us? How will this also make daily news meaningful for them?

Here is a new section. Its close relationship to the preceding, however, must not be overlooked. The similarity between the “seals” and the “trumpets” is too obvious to be ignored. But the trumpets do not constitute part of the seventh seal. That will be explained by John later.

By means of the seals we are taught which “agencies” the Lord Christ uses as He executes the eternal plan and purpose of God with the created order, especially mankind. Now we are instructed which are the “results” or consequences of this rule. Again, while much symbolical language is employed, we do well to remember that all these events are profoundly real. What we have here consists largely of judgments. Already the Old Testament makes mention of these acts of God. We remember how He dealt with the sinful world in Noah’s days while saving a “remnant” of eight souls in the ark. Not only upon the heathen nations but fully as much upon Israel, when rebellious and disobedient, did the Lord inflict severe punishments. Indeed, He also shows Himself longsuffering and patient, as He did with the Canaanites waiting until “the cup of their iniquity” was filled to overflowing. So He acts towards mankind throughout the ages until His wrath reaches its climax in the final judgment.

All this takes place in “the day of salvation.” In the fearful events the Lord Jesus also continues to gather, defend and preserve His people for life everlasting. But as the unbelieving and ungodly persistently turn deaf ears and hardened hearts to His warnings, their pains increasingly prevail until they are driven into dead-end streets where every hope has died away. Much of this is described for us in the sounding of the trumpets.