The contrast between pagan and Christian views of life and death becomes immediately clear and dramatic when you examine ancient gravestones. Archeologists investigating ancient Roman cemeteries regularly unearthed pagan graves bearing an inscription they did not at first understand. The inscriptions consisted of seven letters, NFFNSNC.

Investigations uncovered the meaning of the seven mysterious letters. They stood for the Latin words Non fui, fui, non sum, non curo: “I was not. I was, I am not. I do not care.” Such was the hopeless, cynical worldview of the persons buried beneath the stones.

But wherever the gospel was introduced, the character of the inscriptions changed radically. Christian gravestones bore such words as “Asleep in Jesus,” “He sleeps, but lives” and “He went to God.” 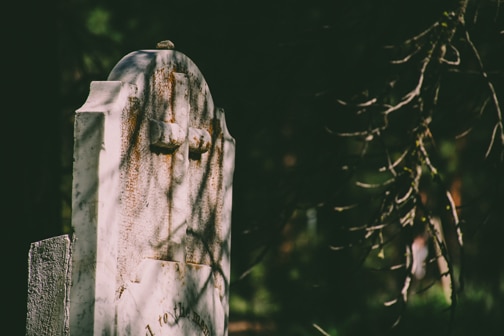 THE HOPE OF THE GOSPEL

The gospel that Christian missions proclaims is of such a nature that it brings a radical change of outlook toward life and death in new believers. The change can be seen in the difference between the worldview conveyed by “NFFNSNC” and the Bible’s view of life and death summarized by Paul, “For to me to live is Christ, and to die is gain” (Philippians 1:21).

Instead of fear, doubt or cynicism, faith in the gospel of Jesus Christ produces unshakeable hope and comfort. Besides assurance and peace about the hereafter, the gospel teaches goals to pursue and values to uphold as long as life in this world continues.

This is because through the gospel fellowship is established with a wonderful, sovereign God who loves and cares for all who trust in Jesus Christ. God calls them his sons and daughters. This God listens to His children’s prayers and cares about their needs. He protects them from all evil, even from Satan and demons.

Because the gospel tells of Christ’s death and resurrection and total forgiveness for all who believe in Him, the gospel brings hope to graves and cemeteries. Whether they are young or old, when God’s children die He takes them home to be with Him and with one another forever.

There is no other worldview or other religion like that which we proclaim in the gospel. Deep down in their hearts all Muslims fear that on the day of judgment Allah’s scale will not balance right. Despite their valiant efforts at complete submission. they can never be sure they submitted enough to gain Allah’s approval and qualify for heaven.

Hindus and Buddhists cannot escape haunting fears of rebirth in lower forms. They know that more sufferings, possibly far worse. lie ahead for them in future incarnations. Forgiveness of all their transgressions by divine grace and a savior’s sacrifice is not a doctrine found in their religions. Karma shows no mercy. Buddha does not save others.

Ancestral spirits are immensely real and potentially dangerous to millions of people, including people who in general accommodate to modern technology and lifestyle. They may work in factories or offices, operate computers and travel the world by jet airplane, but at the same time they believe their ancestors’ spirits are never far away and unseen spirits intervene for good or evil in the affairs of living people.

To people such as these the gospel of Christ’s atoning death and Satan and the grave-conquering resurrection come through global missions.

A little way south of Barcelona, Spain is the ancient town of Tarragona (Tarraco), the traditional landing place of the Apostle Paul. That Paul wanted very much to carry the gospel to the yet unevangelized Spain is evident in Romans 15 where he mentions it twice (vv. 24, 28). The NIV Study Bible suggests that Paul did indeed missionize Spain after being released from his first Roman imprisonment. (See map of “Paul’s Fourth Missionary Journey” on pp. 1836–37, NIV Study Bible.)

There is a large statue of Paul in front of the Tarragona cathedral, and local inhabitants insist for sure he arrived there and was the first to preach the gospel in Spain. Whether Paul himself actually set foot in Spain we cannot determine with utmost certainty. But the gravestones of Tarragona dearly indicate that some missionary did indeed arrive there in the second half of the first century and as a result of his work many people were converted to Christ.

How can we tell? By the carvings on the gravestones, some of which are large lids that once covered long stone vaults. The stones have various inscriptions carved on them, including dates using the Roman calendar.

Toward the end of the first century a remarkable change appears on the gravestones. Instead of the grotesque figures of evil spirits, weapons of war and scenes of violence, Christian crosses begin to appear, along with words such as “Asleep in Jesus,” “Died in the Lord,” “Asleep until Jesus comes.”

The record of this early mission work is seen in the Tarragona gravestones with their inscriptions testifying to the faith, changed lives and worldviews of the people buried there. The same witness is born today in thousands of cemeteries around the world where bodies ofGod’s children await the resurrection.