“And he said, Blessed be Jehovah, the God of my master Abraham, who hath not forsaken his lovingkindness and his truth toward my master: as for me, Jehovah hath led me in the way to the house of my master’s brethren.” (Gen. 24:27).

“God has been good to me! I never knew his love was so wonderful and his mercy so great.”

I was surprised to hear these words from an elderly man who had been bedfast all winter with a heart condition. Now it was late spring and he was just beginning to walk about. It seemed to me at the time that he did not have very much for which to be thankful. He had survived the illness, but his heart was still in poor condition. A man nearing the three-score mark, he obviously would not live long.

Why, then, these words of praise? This man was a Christian! Therefore he was grateful. Saved by grace and loving the Lord, he was ready even at that time to pause for praise.

What led our national forebears to pause for praise? Was it an abundance of grain and food? The harvest had been poor that first year, and many were concerned about how they were going to survive the long, hard winter. Was it comfort and luxury in their homes? To ask the question is to answer it, for they wondered how to safeguard their children from the rigors of the New England weather. Was it the fact that they could gather now at the end of their first season with their families intact? One look at the graveyard so near emphasized the stark reality of the fact that death already had entered most homes. Was it the sense of security? They knew not when hostile Indians would steal upon them with the dread tomahawk.

What was it then that impelled them?—They appreciated their liberty, they rejoiced to be in a new land with great opportunities. Above all, they recognized God in their lives and trusted in him for all things; therefore the pause for praise! 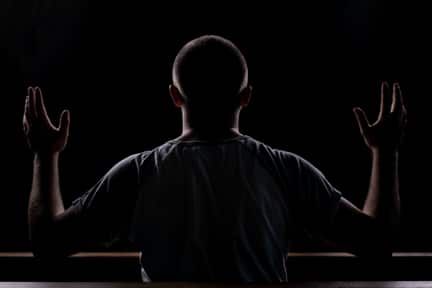 “Rejoice in the Lord!”

Abraham’s servant was a God-fearing man. We know at least that much about him. His mission was a difficult one, and he could well wonder how he would ever succeed. However, he began his difficult task by looking to God in prayer, and we marvel at the providence of the Almighty in leading this noble servant directly to Rebekah. How he was prospered in obeying Abraham’s mandate! And when everything had turned out just as he had prayed, while he was waiting for confirmation by a good reception at the house of Bethuel, as Rebekah ran swiftly to her father, came the pause for praise. How easy it would have been to ascribe this to “chance”! How common it would have been to forget divine providence, now that the event had transpired. But the servant was a God-fearing man. There came the pause for praise.

While languishing in prison and facing almost certain death, the Apostle Paul counseled his beloved spiritual children to “rejoice in the Lord.” Such counsel must have meant a lot to them as it came from the famed inmate of a Roman prison. h was not like having someone say glibly, “O cheer up, it’s not so bad; every cloud has a silver lining.” The same Apostle urged the Ephesians to the high plane of true spirituality when he wrote, “Giving thanks always for all things in the name of our Lord Jesus Christ.” We learn from Paul that gratitude is characteristically the Christian attitude. It is the typical expression of those who know religion, not as a dispensable diversion, but as a personally experienced reality.

Since genuine gratitude is limited to the God-fearing, we do well to lay the groundwork for that kind of gratefulness. Circumstances in the world today are appalling, and a superficial thinker might find it very difficult to be thankful. Yet some are thankful for even a little, while others complain and grumble when they have so much. Wherein lies the difference? Scripture exhorts us continually to be grateful as it counsels us how to live the Christian life. Abraham’s servant had no trouble being thankful; there was both petition and praise in his mouth because God was in his heart.

Let us look at the underlying factors in the life and task of Abraham’s servant. The old patriarch, in the performance of his paternal duty, sent his trusted servant to find a wife for Isaac. A new nation must be formed and the covenant of grace perpetuated. It would not have been difficult to find a wife for the young man; there were many fair daughters of the land available. But the servant had explicit instructions from father Abraham to confine the search to the patriarch’s own kindred. A serious task indeed!

We learn from this story the serious obligation we have as promoters of God’s cause. We must keep ourselves unspotted from the world, deliberately maintaining the spiritual antithesis, and keeping distinct the “seed of the woman” from the “seed of the serpent.” Abraham had a birthright, so did Isaac, and so have we. This is the way along which God leads us. When all was over the servant said in the words of our meditation, “Jehovah hath led me in the way.” When we also walk in that way we will receive God’s blessed favor.

Holy Writ does not tell us the servant’s name, but for a little while he is a major character in the drama of Scripture, a man with an important charge. Much depends upon him as the human instrument for the building of Israel. His task is that of losing himself For a higher responsibility and helping to preserve the covenant line in the family which Isaac was to establish. God grant us likewise a passion for faithfulness in our guardianship of the next generation. In building his Church, let us give heed to our high calling in Christ Jesus, forgetting all factors which seek to draw us aside. Guarding God’s glory and promoting his praise is a blessed task.

“I Will Remember Thy Wonders of Old”

Another factor in this story is God’s providence. Prayer and diligent devotion to duty leads to confidence in that providence. God answered the petition of the trusting servant so surprisingly that the very first young lady he met was God’s choice for Isaac. However, it was in the path of obedience, in the realization of a high purpose, that God blessed him. As it is expressed in the Authorized Version, “I being in the way, the Lord led me…” Since the servant was obedient to God in this manner, it was easy for him to be grateful.

Many are dubious about God’s providence today. War and rumors of war have made men weary. Communism seems to be making steady advance in the hearts of sin-sick men everywhere. There is reason to fear Communism right here in America. The depraved, sinful hear t of man is by nature receptive to that diabolical system with its materialism, secularism, and atheism. Defeat at the hands of the Soviet, or even the dire economic effects of such a war regardless of victory, would furnish real opportunity for complete success to this sinister force.

What, then, are we going to do?

We can go to Asaph’s 77th Psalm for instruction. He, too, questioned God’s remembrance, kindness, fidelity, and grace. But then he spoke these words:

“But I will remember the years of the right hand of the Most High.

I will make mention of the deeds of Jehovah; For I will remember thy wonders of old.

I will meditate also upon all thy work, And muse on thy doings.

Thy way, a God, is in the sanctuary: Who is a great god like unto God?

Thou art the God that doest wonders:

Thou hast made known thy strength among the peoples.

Thou hast with thine arm redeemed thy people.”

Certainly it is necessary with the Church of all ages to look forward in hope, joining in the fervent prayer, “Even so, come, Lord Jesus!” But this attitude alone is not enough. Asaph also turned back in his mind to remember past blessings and deliverances. Doing this, he gained courage for the future.

Think of the way that God has led us in the past! W hat a glorious history the Christian Church boasts! But the same God rules in the heavens today! It is still his prerogative to place on earthly thrones whomsoever he will. Let us not forget that he has always redeemed his people, and that he remains faithful even in the midst of our unfaithfulness. Let us recapture the diligence, the zeal, the consecration, the vision of the early Church! Let us with them give him the preeminence in our lives. In that way we too will find it possible to pause for praise.

“For Thine is the Glory”

Notice how Abraham’s servant takes time to pour out his heart in gratitude to God. It is easy to see him there by the well, humbly praying as Rebekah eagerly dashes homeward to tell of the things that have just happened. How easy it would have been for this servant to take these things for granted, or to refuse to share in the joy of this wonderful blessing. He might, like us, have used this time to envy others, say, wealthy Abraham and his privileged son.

However, nothing like that enters his mind! On the contrary, he loses himself in his duty, identifying himself with God’s covenantal program, consecrating his life to the glory of God. No doubt there were many things that he failed to understand. It must have been difficult for him to be reconciled to God’s ways in view of the fact that he occupied merely a servant’s position. But by God’s grace he serves as a model servant of God as well as Abraham, ever true to the charge which God had assigned him. He soon fades out of the biblical picture. We hear no more of him after Isaac and Rebekah meet. But we do hear more of Isaac, of Jacob, of Israel, of God’s covenant with his people, of his Church throughout the ages, and of his praise sung forever by legions of redeemed.

In spite of all the difficult circumstances in our world today, all perplexing events in our individual lives, all pacifying voices from complacent church members, all taunts from unbelievers, God’s Church is marching on to the day of consummation. Because we are “chosen in him from before the foundation of the world,” we do and shall march in that heavenly company. Yes, there is work to do here below in identifying ourselves with God’s program, in following the Christ whose “blood-red banner streams afar.” This is our charge! This is God’s way for us! Then we can be thankful in all things, for gratitude is the true expression of the redeemed heart.