Key Verse: “Hear O Israel: Today you are on the verge of battle with your enemies. Do not let your heart faint, do not be afraid and do not tremble or be terrified because of them; for the LORD your God is He who goes with you, to fight for you against your enemies, to save you.” Deuteronomy 20:3-4

In an earlier lesson we observed that Deuteronomy contains preached law. Preached law is quite different from mere case law or civil code. The LORD preached this law to Israel in the context of grace (deliverance from Egypt), to teach her the gospel in shadow form.

To the modern eye this gracious, gospel character is perhaps least visible in Deuteronomy 20, a chapter about waging war against national enemies. Most people think that precisely those tensions and cruelty of warfare contradict the very heart of the gospel.

Notice, however, that most of the chapter involves exemptions from wartime duty. This obviously don’t fit with a militarist thirst for vengeance upon natIonal enemies. Moreover, the very first ‘act of war’ was to be an offer of peace to the enemy (v. 10). In addition, Israel’s military conflicts were to be controlled and limited, for the protection of the creation (v. 19). These three elements in Deuteronomy 20 help us see and hear the gospel amid the storm of battle.

“When you go out to battle against your enemies, and see horses and chariots and people more numerous than you, do not be afraid of them; for the LORD your God is with you, who brought you up from the land of Egypt” (v. 1). Immediately the LORD deals with the most common wartime response: fear of the enemy. Humanly speaking, Israel had good reason to fear, since she was not permitted to amass horses and chariots like her neighbors did (see Deut. 17:6).

But notice the basis for fearlessness: “for the LORD your God is with you.” This Immanuel-confidence is the very same security David sang about in Psalm 46, and Isaiah prophesied concerning the virgin’s Child (Isa. 7:14; Mt. 1:23).

This God-with-us is the God “who brought you up out of Egypt.” Every battle was to remind Israel’s army of that “war” against Egypt In which she didn’t have to lift a finger. The LORD did it all. Moses later sang of Him as a “Man of war” (Ex. 15:3). 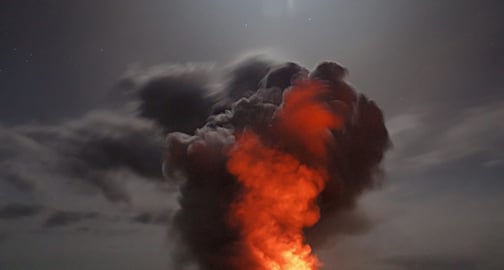 Before setting out to fight, Israel’s army must pause for instruction from the priest, who reminded the soldiers of this gospel-confidence based on God’s presence and power leading them in battle. It is significant that the priest, not the king, was to give us instruction. In the old covenant, the priest administered atonement, which formed the heart of the gospel of reconciliation. His work centered around the ark of the covenant the mercy seat, the dwelling place of Immanuel. So as the representative of the Reconciled Almighty Lord of Hosts, the priest commissioned Israel’s army to go forth from the LORD’s sanctuary to wage holy war in the confidence of covenantal victory through divine blessing.

After the priest had finished, the army officers stepped forward to announce three categories of exemptions from military service. Imagine the growing consternation as the soldiers watched the army shrink before their eyes!

The first exemption was offered to each man who had just built a house but had not yet lived in it.

Next an exemption was declared for the man who had planted a vineyard but had not yet begun to enjoy it. (Question 1)

The third exemption from fighting was granted to the soldier engaged to be married.

Imagine what happened: as each exemption was announced, the ranks would thin, until finally there would remain only a handful of soldiers!

With more than a touch of humor, the LORD offers one more exemption. If there were any soldiers left (who obviously had been watching this depletion of their ranks!) who were afraid to fight (and who wouldn’t be?), they could return home.

Several aspects of this divine instruction are worth our attention.

The first three exemptions, pertaining to homes, vineyards and families, involve the character of Israel’s life in the promised land. Enjoying the land of Canaan was at the heart of Israel’s wars. And that land, remember, was at the heart of God’s redemption plan. For in Canaan the LORD would gather, preserve and defend a people from whom Messiah would come, for the redemption of all God’s people. Without homes, vineyards and families, there would be no life in the promised land, and eventually no people of Israel, and ultimately no Messiah. These merciful exemptions from war duty served the coming of the Lord Jesus Christ.

Notice too the LORD’s merciful permission: even  though fear of fighting showed lack of faith, the fearful soldier was not to be court-martialed or publicly humiliated, but sent home, “lest the heart of his brethren faint like his heart.” Fear is contagious, quickly crippling fellow soldiers and exposing them to defeat. There is room among God’s people for those whose weakness is faintheartedness.

Finally, observe that only the LORD decides who may be exempt from fighting His holy wars. In the New Testament church there are those whom He calls and equips to do battle with enemies outside the church. Think of believers who develop an intellectual defense of the faith among unbelievers, or work at the political application of biblical principles in a secular society. Not everyone is spiritually suited to this kind or warfare; and those relatively few whom God calls to this warfare must be committed to receiving all their strength from the LORD. (Question 2)

A careful reading of these verses will show that two kinds of war are being discussed. Battles fought against an aggressor are discussed in verses 10–15, while battles against the Canaanites who were soon to be dispossessed are covered in verses 16–18.

The importance of this distinction becomes clear in verse 10: “When you go near a city to fight against it, then proclaim an offer of peace to it.” We should understand this to apply to those cities outside of Canaan, belonging to nations who later would attack Israel. The LORD’s people were to offer the inhabitants of such cities a treaty. If they accepted the offer of peace, the residents would become vassal servants of Israel, working for their new master. If theymrejected the peace offer, Israel was to put the city under siege; and when the LORD’s guaranteed victory came, Israel must execute all the males, but may enjoy for themselves the rest of the spoils of war. (Question 3)

By contrast, the cities within Canaan itself were to be completely destroyed (w. 16-18). In this way Israel executed divine judgment upon the wickedness prevailing in Canaan. She “cleansed the LORD’s temple” so to speak. This complete cleansing was necessary also to prevent the infection of Israel’s worship with idolatry left over from the Canaanites (v. 18). (Question 4)

Wars are like oil spills: everything gets blackened, often because military weaponry and strategies cannot leave buildings and natural resources untouched. In the ancient Near East most armies followed the practice of cutting down trees and laying waste the land of the enemy. In the heat of modern battle, what bomber pilot can separate people from property, or munitions dumps from rivers and forests? Such discrimination requires strategies of self-control and personal respect for the creation.

The LORD’s people were forbidden to give free reign to their military passion. One symbol of selfcontrol was the fruit tree, which represented the investment of labor characteristic of human culture. Israel’s soldiers might use other trees for building siege works, but not the orchards. (Question 5)

Self-control is a fruit of the Holy Spirit, as we know from the New Testament (Gal. 5:22). This Old Testament military restriction bas a spiritual tone, one that belongs to the melody of the gospel, a song that grew louder as Christmas and Pentecost approached.

We wish to close this lesson with this summary thought: what makes God’s old covenant legislation unique is its gospel context and gospel content. These are what distinguish Deuteronomy from other “law codes” and “vassal treaties” shared among Israel’s contemporaries. Her laws were special because her Lawgiver is special! And that’s the gospel truth!

1. Read Leviticus 19:23–25. How long must the Israelite wait between planting the vineyard (and orchard) and enjoying its fruit? What was the significance of the fourth year in this period?

2. Read Ephesians 6:10–20. These verses describe the church’s armor (the “you” in vv. 11 and 13 refers first not to individual believers, but to the congregation). List each piece of armor and explain briefly what use(s) of the piece apply to its biblical counterpart. For example, what use(s) of a shield apply to faith?

3. Read Matthew 24:14. How is the preaching of the gospel to all the nations similar to “making an offer of peace”?

4. Read Matthew 10:5–15. According to v. 6, to whom were the disciples being sent? According to vv. 13–14, how were they to respond if these people rejected their “offer of peace”? According to v. 15, what would happen to such unbelievers? What reversal has occurred here, in terms of judgment for those ‘inside’ and those “outside” of Israel?