More and more Christians are saying, “It doesn’t make any difference what we do with that old, worn out body. Bury it, burn it, make soap out of it. It is all worthless. However, on the basis of a ten year study, I am prepared to say that cremation is

3. It is pagan in its origin

Dr. David Van Gelder of Bethesda Christian Counseling Services in Denver, Colorado writes, “Death and disposal have many psychosocial implications. Most psychologists agree. John McCoy, in a half page article in the November 9, 1985 edition of Seattle, Washington’s newspaper, wrote, “The funeral is to help the living.” He went on to relate how it is very much a part of the grieving process. McCoy went on to tell the story of Rev. Fred Towne, who found himself sobbing uncontrollably during a counseling workshop. Towne, a pastor in Seattle, realized that he had never grieved for his younger brother, lost in the war as a pilot fighter over China. The clergyman, now 68 and a specialist in grief counseling, was surprised by the depth of his emotions, buried for years. Because the body of his brother had never been recovered, no funeral was ever held. His brother had never been memorialized. He was never properly mourned. Another father wrote of how he had lost a son in the Battle of Coral Sea. Because the body had never been found, the father was convinced his son had survived the conflict. Often when he saw a newsreel, he was convinced that he saw his son. He would fly to Tokyo or London and wander aimlessly down the streets for a few weeks in these cities looking for his lost son. The family did not put a death date on the son’s gravestone until after the father had passed away.

Clergy, counselors, and funeral directors agree that there is a growing trend toward disposing of the dead with no ceremony whatsoever. Most view such a practice as unfortunate and psychologically unsound.

Clifton Anderson of the Washington Funeral Director’s Association writes, “One out of every four bodies handled by Seattle area funeral homes is either cremated or buried without a service.” He goes on to write that “no service, no ceremony, no notice in the paper occurs about half the time.” One funeral home offers to remove the body, cremate it, and scatter the ashes without involving the survivors at all. You can even sign the forms by mail.

Most funeral directors contend that forgoing even a simple memorial service cheats the living, not the dead. Anderson continues, “The function of the funeral is to bring the family back to life, not only to pay respects to the deceased. A funeral service occurs when the family and community get together and say a life has been lived and now are different because this life has ended. We need to relate to each other and accept that difference.”

Robert Fulton, a University of Minnesota sociologist who specializes in the study of death, attributes many hallucinations and attempts to communicate with the dead to the strong psychological temptation to insist that the deceased is still alive.

Such knowledgeable men believe that the tendency to deny death partially accounts for tens of thousands of unclaimed ashes that sit in Seattle funeral homes. It is reported that more than a quarter go unclaimed. Freud wrote, “Everyone tends to deny his own mortality,”

The practice of cremation seems to be on the increase. Agreement among Denver funeral homes states that there are forty five to fifty cremations for every hundred funerals. Rev. Jim Kok, formerly of Pine Rest Christian Hospital of Grand Rapids, Michigan, now working at the Crystal Cathedral, says in response to a question about cremation:

If you are part of a tradition that buries the dead, it is advisable to continue that practice. Traditions we tamper with at our own peril. The rituals and activities that have evolved in our funeral practices have meaning and serve purposes beyond our usual realization. Cremation may disrupt those grief-assisting rituals unless it is your traditional way of disposing of the dead.

Funeral practices serve us best when they meet the emotional needs. Emotionally it is not possible to detach oneself quickly from the body of a deceased loved one. It takes time. No human being can switch abruptly to thinking of their dear one exclusively in the spiritual state. The body has been the person and is the person for a long time until gradually a transition is made and the buried body assumes a place of unimportance, the person being treasured now recognized as being in a heavenly place.

For this reason, I believe, those who have long traditions of burying the dead, after a few days of acute mourning along with all the meeting of friends and colleagues, etc., are far better off to stick with this way of doing things. It provides the time and rituals that are extremely valuable in doing the necessary grief work.

In those groups where cremation and instant disposal has been common for generations you will find elaborate traditions following the disposal that aid the grieving in their mourning process. Without these there is bound to be trouble from unfinished grieving.”

The practice of cremation tends to minimize death. Hence, cremation without a proper memorial service is not to be advised. Visitors from the Netherlands report that hardly anyone attends cremation services anymore, short-circuiting the grief process for the survivors. 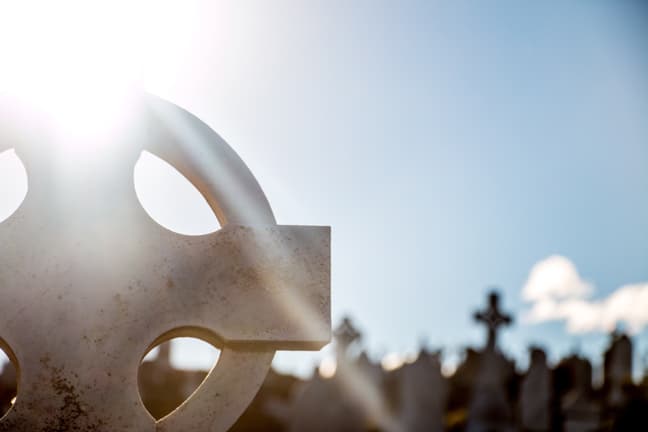 Even thought the Bible does not explicitly condemn or permit cremation, we do know that Achan was burned with his family for taking gold from Jericho (Joshua 7). The Philistines found King Saul’s body and men of Jabesh later burned it (I Samuel 31). In Leviticus 20:14, God commands cremation for a man who marries both a woman and her mother. And in Amos 1:2, destruction by fire is meted out to Tyre and Teman.

The thought seems warranted that cremation is carried out in the Scriptures only on those cursed by God. Certainly those in hell are cursed and bearing the punishment of the eternal fires. Why would someone want to dispose of their body by using the method of implementing God’s curse, for those receiving God’s blessing?

The long four thousand year example of the Jewish patriarchs and prophets from Abraham to David, to Jesus and Stephen is interment. Moses was buried by God Himself. God did it that way! Jesus, according to Old Testament prophesy, was buried. Jewish history must mean something. Why wasn’t Moses cremated and his ashes scattered to the winds that would blow over the beloved Promised Land? If Jesus had been publicly cremated and then suddenly appeared reconstituted from the ashes resurrected alive and well, thousands would have believed. But God chose burial for Jesus, Jews, and Christians. The owner of Feldman Mortuary of Denver writes, “We are Jewish; is it any wonder that cremation is nil here?”

What is the non-believer saying when he is cremated? What is behind the words: “Take my ashes and sprinkle them out of an airplane along the snowy slopes of Mt. Ranier; into the verdant valleys of the Rockies, or the blue waters of Puget Sound”? Often it is pure naturalism. The individual is saying that this is the end of life and there is no other. There is no God, no grave, no resurrection of the dead, no judgment. There is no such thing as the transcendental. He is going home to the everlasting hills and back to his god of mother nature.

It is not too much to say that the Bible’s example is burial. God, of course, knows what is good for His people. Vented grief is “good grief.” Hence, the Bible gives many examples of grief: sorrow is described at the death of Jacob (Genesis 50), Moses (Deuteronomy 34), Jairus’ daughter (Mark 5), and the son of the Nain widow (Luke 7), to name a few. In each case it was meant to be psychologically beneficial. God even caused the New Testament Jews to hire mourners to evoke feelings of sorrow.

Grief expressed is usually grief released. The ecclesiastical community, in some areas, observes grief properly: open casket; body on display at a visitation; an hour service with a well exegeted text; flowers; a reception (potluck/sandwiches) with a large attendance at the interment and full participation by many. The funeral is an event. And a tape; by all means, a tape to be shared by those who could not attend. This is all to the good. It helps mourners to listen and to grieve.

Good grief is vented grief. After thirty years of observation at funerals, I looked on with a bit of apprehension when I would see the bereaved bearing up so bravely. Tears are normal. The Jewish request of God “…put thou my tears in thy bottle…” (Psalm 56:8), asks God to do what the Jews practiced. Barnes writes of how he saw the catacombs littered with tiny glass tear bottles. If grief is felt and displayed the it becomes true what God originally intended: “Weeping may remain for a night, but rejoicing comes in the morning” (Psalm 30:5).

In addition, cremation is pagan in its origin. The Encyclopedia Americana says, “Cremation was the … mode of the Caesars. Christianity opposed (it) because of the …resurrection.” Buddha was cremated in India in 483 B.C. and the practice spread quickly throughout eastern Asia.

It is very clear that burial of the body was by divine example and instruction and should be continued.

Rev. Nicholas Vogelzang is an emeritus pastor in the Christian Reformed Church. He is a member of the Hillcrest CRC in Denver, Colorado.