A beaming father thrust a Bible into the hands of his son and said, “Son, I have bought you a Bible and, so that you won’t get lost in it, I have underlined all the Arminian passages.”

Among the passages underlined, I have no doubt, was this one: “Behold I stand at the door and knock: if any man hear my voice and open the door, I will come in to him” (Rev. 3:20). Free-will with a vengeance! A Christ who is check-mated until the sinner lets him into his own putrid heart! Man electing God and not God electing man! Who, I wonder, is the cook and who is the potatoes? 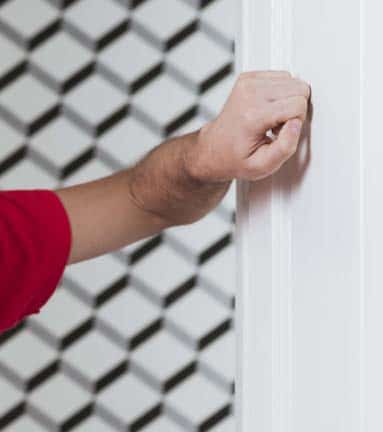 The gentleman who reads his Bible with red-pencil poised in order to pounce on error where, if, and as, he sees it, is wrong on many points; but his type, after all, does not occur too often. His opposite, the “Reformed” man whose spiritual Geiger counter refuses to tick even in the presence of crackling, radio-active heresies, is fast becoming an everyday phenomenon. It is to help him understand the Scriptures that this magazine is publishing a short article on a somewhat ticklish verse.

From Scripture we know that the Christian church located at Laodicea was an eye-sore to its Lord. It is not hard to see why. The elders and the deacons and everybody else in the church were too well off to know what was good for them. They had forgotten the advice about the camel and the needle’s eye. The fat bankers who sat in reserved seats on Sunday had become Babbitts sailing the good ship “Compromise” by the strongest wind that blew. Whizzing zeros they were, all velocity at the rim and dead at the center. Smooth manipulators of strong levers they turned out to be, content in their late forties to chew the cud of commercial success. A typicaI middle-class church, this Laodicea, composed of bankers, businessmen, oculists, a few government agents perhaps, and some favored craftsmen; the kind of middle-class church that lets the passionate intellectual out through the top and the disappointed day-laborer out through the bottom.

One day the clerk of the consistory received a shocking letter. It was a letter dictated by Jesus Christ in person and transmitted by a lonely, exiled saint whose name was John. It said: I am nauseated because you refuse to run a temperature over anything but a setback in business. I am about to turn my back on you because you do not hate what the world loves and do not love what the world hates. I have almost made up my mind about you because you say, “In a moment there is time for decisions and revisions which a moment can reverse.” Toward the end of the letter, the clerk noticed, the tone was somewhat milder. If they would come clean, the letter said, they would still be saved.

And now comes the difficulty: Is the text “Behold, I stand at the door and knock . . .” compatible with the Reformed emphasis on the priority of the divine thrust man-ward, in other words, on election and irresistible grace, or is it not compatible? What comes first: God’s action in the heart of man or man’s own action? The Reformed creeds calmly assert that God’s action comes first. And many evangelicals heatedly point out that this text in Revelation teaches the opposite.

It must be said first that the letter is addressed not to the world in general but to a church of Christ. This letter is simply not applicable to the world in general. Think of the preceding verse: “As many as I love, I reprove and chasten.” This is the language of a father bent on the salvation of his children, the language of Christ who is both angry and hurt over the sinful inertia of his church.

It must be said further that the text, though it teaches the imperative need of repentance, does not explain by what power these people could hear the voice of Christ or admit him to their hearts. There is no denial here at all of a prior operation by the Spirit. This letter requires a change of mind within a Spirit-born church and not a new birth within a Satan-controlled world. This distinction I refuse to surrender even while I grant that Satan had more than a foot inside the door of the Laodicean congregation.

The picture implicit in this text is one of great tenderness. We see Christ standing against (Gr., epi) the door and pleading, “If anybody inside the church hears me and opens the door, I will have my evening meal with him and we will have a good time together.” The text certainly rules out a cold coercion. If those people are wrong who believe that the sinner can unlock the treasury of heaven with the key of free-will, then also those are wrong who believe that God bulldozes his elect into heaven. God draws, and does not drag, the sinner. One might put it this way: Neither the hyper-Calvinist who refuses to preach the requirements of God, nor the evangelical who refuses to preach the sovereign grace of God, has mastered all the moods and tenses of the divine Word. Or to put it positively: God’s overtures are sovereign but they are also overtures.1

1. Rather than clutter a short piece like this with a dozen footnotes, I shall merely name those men whose works I have consulted: Meyer, Alford. Morris. Hendriksen. Trench. Prins and Wiersinga. Ramsay. and Greydanus.