Modern France is dominated religiously by skepticism or Roman Catholicism. As one scholar put it. all modern Frenchmen seem to be followers of either Descartes or Pascal. But four hundred years ago France was experiencing a powerful reformation in its religious life and many Frenchmen were followers of John Calvin.

France produced some of the greatest religious thinkers of the sixteenth century. Lefevre d’Etaples was an important student of the Bible and led efforts to purify the moral life of the Roman Catholic Church. John Calvin and Theodore Beza were, of course, two of the greatest theologians of the Reformed Church. But the ferment in France was not limited to a few brilliant leaders. The Reformation became a wide-spread popular movement with major consequences for the history of France. The story of the Reformed Church in France is not often remembered in our time. but we should pause to celebrate the four-hundredth anniversary of one of the great moments in the French Reformation. In 1598 King Henry IV issued the Edict of Nantes which guaranteed a variety of religious liberties for French Huguenots.

The years leading up to 1598 were eventful indeed. The Reformed Church began to grow significantly in France in the 1550s. Graduates of the Genevan Academy became missionaries in France. The students joked in Geneva that their diploma was their death certificate because so many of them died as martyrs in France. The French Reformed Church was one of the churches in those years “under the cross,” that is, a church suffering persecution. Many of the martyrs, both ministers and other members of the church, died with remarkable courage. So many went to the stake singing Psalms that their executioners began tearing out their tongues in prison to keep them from singing.

In spite of the fierce opposition — in some ways because of it -from the state and the Roman Catholic Church, the Huguenot movement grew and became very large in certain areas of France. It is estimated that by 1562 the Reformed Church had 3 million members out ofa total French population of 20 million.

The size and power of the Reformed Church created new challenges, some from within the church and some from without. Internally the church found that increasingly influence was passing from the ministers to the nobility that had been converted. (By 1562 it is estimated that 50% of the French nobility had identified with the Huguenot cause.) For some of the nobility conversion to the Reformed faith was sincere and deep. For others, however, the church provided a rationale for their opposition to the king and efforts to limit his authority. Outside the church, the state and powerful Roman Catholic nobles wanted to contain or destroy the Protestants and weaken the Reformed nobility. The result of this complex situation was a time of intermittent civil war in France beginning in 1562 and ending in 1594 known as the Wars of Religion brought hardship to many in France and confused the religious issues with political ones. On the Reformed side one of the nobles who stood with the greatest integrity and faith was Jeanne d’Albret. On her mother’s side she was the niece of King Francis I, the great Renaissance king of France.

From her father she inherited the kingdom of Navarre and was itsqueen. (Navarre was a small kingdom between France and Spain.) Her husband, Antoine de Bourbon, was a direct descendant of King Louis IX and so related to the French royal family, “a prince of the blood.” Jeanne and her husband had a son, Henry. She and Antoine joined the Reformed Church in 1560, but in time he repudiated that decision for political reasons. When Jeanne was asked if she too would return to the Roman Church, a contemporary recorded that she finally replied that, rather than eyer go to Mass, if she held her kingdom and her son in her hand, she would throw them both to the bottom of the sea.”

The success of the Reformed Church led to a conspiracy against it planned by the king and some of his closest advisors. On St. Bartholomew’s Day, August 1572, a massacre of Protestants began in Paris and spread to other parts of France. Thousands of Reformed Christians and much of the leadership of the movement were slaughtered. In some ways the church never fully recovered. Still the church survived and seemed to grow strong again.

In 1589 King Henry III of France died without a son. The next in line to the throne was Henry of Navarre, the son of leanne d’Albret, himself a Protestant. To many it seemed that his succession meant that France would become a Protestant nation. But not all in France recognized Henry’s claim on the throne and years of difficulty followed. By the spring of 1593 Henry had gained control of all of France except Paris. Paris was the citadel of Roman Catholic resistance. Henry could have taken the city by force, but the cost in lives and morale would have been tremendous. He decided instead to gain the support of Paris by becoming a Roman Catholic. He supposedly said, “Paris is well worth a Mass.” With that statement Henry showed that he shared more of the political expediency of his father than the religious commitment of his mother.

As early as 1573 Henry had concluded that the only way out of religious conflict for France was some form of freedom of religion. Such an idea was quite foreign to most people in sixteenth-century Europe. Most Europeans believed that the state should support and enforce true religion. Only true religion could hold the fabric of society together. Henry’s idea of religious freedom was bound to be very controversial.

Still on April 13, 1598, Henry issued the Edict of Nantes giving very specific freedoms and privileges to the French Huguenots. The document is complicated running to almost 100 pages. He granted complete liberty of conscience in religion to all of his subjects. He granted the right to public worship for the Reformed in various cities and towns throughout France, but forbade such worship in Paris. He declared that the Reformed could hold public office, could attend university, and could print Bibles and some other religious literature. He agreed to pay the salaries of the Reformed ministers out of public funds. He also permitted Protestants to fortify and defend with Protestant troops some 103 towns in France at state expense.

The intent of the edict was to put an end to conflict in France by securing the rights of the Reformed Church to exist, but not making it too easy for it to grow. For a number of years it succeeded in that goal. The Reformed Church, however, continued to face both internal and external problems.

Internally the church saw its numbers decline to around 1.3 million by 1620. The problems of living in a predominantly Roman Catholic society also divided the church. Some believed that the church needed to be firm and uncompromising in its proclamation of the Reformed faith. Others wanted to be prudent, minimizing Reformed distinctives. From those who were prudent emerged the teachings known as Amyraldianism which softened and weakened confessional Calvinism.

Externally the Reformed saw the Edict of Nantes amended around 1628 by Cardinal Richelieu in the name of King Louis XIII. Richelieu removed the section that allowed Protestants to hold fortified cities arguing that the Reformed were using that privilege to create a state within the state and to foment rebellion against the king. Other Protestant privileges remained. but in the coming decades the church continued to decline.

Unexpectedly in 1685 King Louis XIV revoked the Edict of Nantes. He did that in the name of the medieval ideal of a religiously-unified state. He declared that the edict was no longer needed as only Roman Catholics were to be found in the realm! As a result many French Protestants emigrated from France, moving to the American colonies, to England or to the Netherlands. These emigrants were, according to many historians. the backbone of the French middle class and their loss contributed to the economic polarization of France and ultimately to the French Revolution. How different history might have been had Henry IV held to the faith of his mother, or if his heirs had upheld his Edict of Nantes. 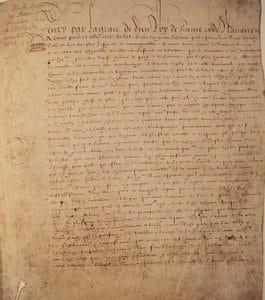 The Edict of Nantes was one of the very first political efforts in Europe to move toward freedom of religion. It attempted not to drive religion from the public arena, but to create space for more than one religion. It was not ultimately successful for France or for the Reformed Church there. But its 400th anniversary calls us to consider again the importance and difficulty of creating and maintaining religious freedom. It also calls us to remember the heroic witness of so many in the Reformed Church of France to the truth of the gospel.

Dr. Godfrey is Professor of Church History and President of Westminster Seminary in Escondido, CA.