Though they dig into Sheol, thence shall my hand take them; and though they climb up to heaven, thence will I bring them down.

And though they hide themselves in the top of Carmel, I will search and take them out thence; and though they be hid from my sight in the bottom of the sea, thence will I command the serpent, and it shall bite them.

And though they go into captivity before their enemies, thence will I command the sword, and it shall slay them: and I will set mine eyes upon them for evil, and not for good.

For the Lord, Jehovah of hosts, is he that toucheth the land and it melteth, and all that dwell therein shall mourn; and it shall rise up wholly like the River, and shall sink again, like the River of Egypt; it is he that buildeth his chambers in the heavens, and hath founded his vault upon the earth; he that calleth for the waters of the sea, and poureth them out upon the face of the earth; Jehovah is his name.

Are ye not as the children of the Ethiopians unto me, O children of Israel? saith Jehovah. Have not I brought up Israel out of the the land of Egypt, and the Philistines from Caphtor, and the Syrians from Kir?

Behold, the eyes of the Lord Jehovah are upon the sinful kingdom, and I will destroy it from off the face of the earth; save that I will not utterly destroy the house of Jacob, saith Jehovah.

For lo, I will command, and I will sift the house of Israel among all the nations, like as grain is sifted in a sieve, yet shall not the least kernel fall upon the earth.

All the sinners of my people shall die by the sword, who say, The evil shall not overtake nor meet us.

Will this prophet never cease to speak of the evil which will befall Israel? Has he not made it very clear in the past? Will the day never dawn?

Yes, the dawn will come but the darkness becomes even more intense before the coming of the dawn. Amos has seen four visions concerning the future of Israel. The fifth vision is now recorded. This one is more awful than the previous ones, He sees God standing beside the altar. The prophet does not mention where this altar was and it matters little. He does not see God as the covenant God but as the majestic One. When he sees him he speaks. Again, the prophet does not tell us whom God is addressing. All the emphasis falls on the words which he speaks. Terrible words! He says: “Smite the capitals that the thresholds may shake; and break them in pieces on the head of all of them.” The picture is this: The people come in large numbers to their place of worship. They are not all able to get in. God now commands someone to smite that part of the building which supports the roof and ties the wall together. So the whole building collapses on the heads of those who worship. Those who were not able to find room inside will not escape. He will slay them with the sword. None will flee away or escape. They are smitten while they worship. The horns of the altar no longer offer asylum. This is the last vision and, surely, no more are needed!

To make it clear that the punishment will be inescapable, the Lord now goes into detail. He will show the people that there is simply no way out. These words remind one of Psalm 139. Even though these people could dig down into the realm of the dead, they would be brought up from thence by the hand of God to face punishment. If, on the other hand, they would be able to climb up into heaven, it would offer them no refuge. God’s hand would bring them down. If they would hide in the woods and caves of Carmel, he would find them. Should there be those who would leap from Carmel into the depths of the Mediterranean Sea, he would command a sea monster to slay them. Not even captivity will safeguard them against the avenging hand of God. His omnipresence is a source of the greatest comfort to the believer, but it is a source of terror to the wicked. When his eye is upon the people for evil, there is no escape. 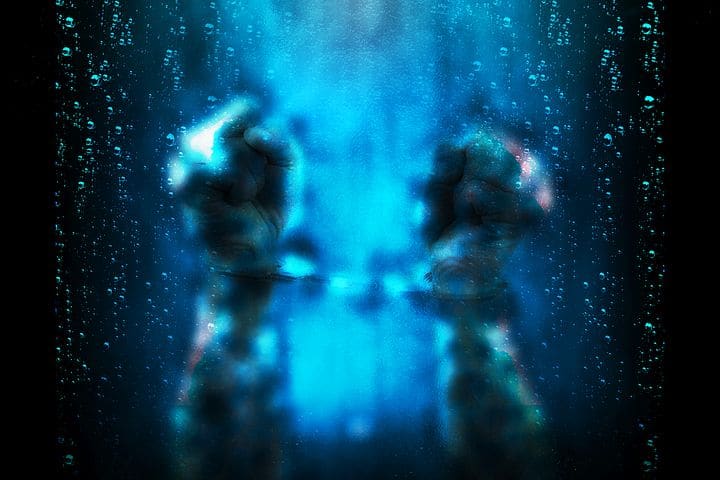 How will anyone ever strive with God? Notice who he is. He touches the land and it melts. This causes all the inhabitants to mourn. He sends great upheavals (8:8) so that the earth appears as the waves on a broad body of water. This is the God who is enthroned in the heavens. He has made all things. He takes the waters of the seas and pours them out on the dry land as at the time of the flood. Who would ever be able to oppose such a one successfully? How can man be so foolish as to strive with this God? His name is Jehovah, God of the covenant, but it is a name to be feared by those who oppose him. This God-concept is clear throughout the book of Amos. The prophet heard this God speak and he had to prophesy.

This people (Israel) is like the Ethiopians in the Sight of God. What? Does Israel not have a special place in his affection? Can it now be said that there is no difference between this covenant people and such an inconsequential people as the Ethiopians? At the time when Amos lived these people had not yet attained to an important position among the nations. But Israel is no better, according to the prophet. Does then the past mean nothing? Had not Cod led them out of the bondage of Egypt into this land where they now dwell? Yes, but they are not the only people who can speak of an exodus in their history. Cod had led the Philistines out of Caphtor (Crete?) and the Syrians out of Kir. Surely, the mere fact of their exodus will not give them a privileged position among the nations. Past history is no guarantee of present salvation!

Israel is a sinful kingdom. This has been Amos’ contention throughout and he has proved it in many ways. God’s eyes are on this sinful kingdom. He is aware of all that takes place. Despite their glorious past, they are a sinful nation. It will be destroyed from off the face of the earth. There is no escape for the sinner. However, the first streaks of dawn now appear. It is not yet light, but there is a promise of better things to come. The sinful kingdom will be destroyed, but God will not utterly exterminate the house of Jacob! Sin will be purged. There is no room for the sin of Israel in the presence of their God. Yet, a remnant will be spared.

How will this be accomplished? There is much difference of opinion regarding the translation and interpretation of verse 9, God here speaks of sifting his people. They will be sifted among the nations. Some think of a small sieve which will not allow the grain to fall through. Others think of a larger sieve which permits the grain to fall through but screens out the stones, of which none will then fall on the ground. The meaning is clear. There is much in Israel which will prove to be refuse when the sieve is used. However, there is some good grain. This will be saved. The good will not perish with the evil. There are still those who are the objects of God’s grace. He wiII not utterly destroy Jacob.

Let no one think that now the punishment will be lightened for all. God has declared judgment on the evil doers. This declaration stands. All the sinners among Israel will die by the sword. Who are they? They are the ones who have turned a deaf ear to the words of the prophet. These are the ones who said, “It can’t happen here.” For these there is no escape. These are unrepentant. These have simply ignored the Word of God. They felt that God owed them a debt of gratitude for their “piety.” For such there is no hope.

1. Is there any similarity between the visions of Amos and some of the parables of Jesus?

2. Why does the most severe punishment fall on those who are in the temple?

3. Are all the attributes of God distressing to the unbeliever?

4. How much does one’s conception of God determine his religion? Would you say that the question: Who is God? is fundamental?

5. The Ethiopians were black. Does the reference to them in this passage have anything to teach us in regard to the race issue?

6. Did the northern kingdom become “the ten lost tribes”? Were any people in Israel in later years able to trace their ancestry to these tribes?