In that day will I raise up the tabernacle of David that is fallen, and close up the breaches thereof; and I will raise up its ruins, and I will build it as in the days of old; that they may possess the remnant of Edom, and all the nations that are called by my name, saith Jehovah that doeth this.

Behold, the days come, saith Jehovah, that the plowman shall overtake the reaper, and the treader of grapes him that soweth seed; and the mountains shall drop sweet wine, and all the hills shall melt.

And I will bring back the captivity of my people Israel, and they shall build the waste cities, and inhabit them; and they shall plant vineyards, and drink wine thereof; they shall also make gardens, and eat the fruit of them.

And I will plant them upon their land, and they shall no more be plucked up out of their land which I have given them, saith Jehovah thy God.

Although Amos has denounced Israel for its sins and the crashing of the judgment is heard throughout this book, he concludes his prophecy on a different note. The prophet unmasks sin but also speaks comfort. He does not only use the first key of the kingdom to close the door to the wicked and unbelieving; he also opens the door to those who repent and believe.

The day of Jehovah for which Israel has longed will be utter darkness. But a better day will dawn. Amos now describes the state of David’s house. That house of David had been gloriOUS. Its glory was found in the fact that Jehovah himself had built that house (II Sam. 7). Due to the sins committed through the years that house is now found to be in disrepair. It is now “the tabernacle of David that is fallen.” The Revised Standard Version translates it: “booth of David.” Its glory has departed. It has been ruined from within. The people may object to this characterization, but the prophet sees things as they are.

That tabernacle, that booth, that is fallen will be raised up. Destruction is not the last word. God will cement the cracks, the breaches, which have appeared in its walls. He will raise up the ruins, that which was broken off. It will be rebuilt and be as it was in former days. God’s work will not fail. Even though the picture drawn by the prophet was very dark, the light now breaks through.

Not only will this tabernacle of David be rebuilt, but the meaning of this rebuilding is also made clear. Israel will again possess the remnant of Edom. It will possess all the nations which are called by the name of Jehovah. What does the prophet mean by this? The nations called by the name of Jehovah, or rather, the nations upon whom the name of Jehovah has been called, arc those nations which were subjected by Israel in former days. The name of the God of this conquering nation, Israel, was called the name of the God of the defeated nation, as an indication of his victory. Edom alone is mentioned by name. Edom was more closely related to Israel than any of the other nations. It was a special grief to Israel when Edom cast off its yoke of subjection to Israel. In the future Israel will again be the prominent nation as in the past.

As the prophet describes the restoration of Israel in the future, we are reminded of the words found in Leviticus 26:5 and Joel 3:18. 1n these passages the prosperity of those who fear God is pictured. The plowman will overtake the reaper, according to Amos. The harvest will be so great that the people will still be busy reaping the grain of the former year when the time to plow is again upon them. While they are still sowing the grapes will be ripe. There is no period of inactivity, no period without profit. The mountains will drop sweet wine and all the hills will melt. Every piece of land will bring forth in abundance. It will be a time of great prosperity. What a change! The former days were those in which nothing succeeded. Where the favor of Jehovah is, there is peace, love, and prosperity.

These blessings will not come instead of the evils spoken of formerly. Amos does not contradict himself. Israel will surely go into captivity but it will return from this captivity. Jehovah will bring back the captivity of his people. Why will his people return? Van Gelderen, a great Old Testament scholar, translates the first part of verse 14 so as to mean that God will remove the sins of Israel, his people. That is the heart of the matter. Only forgiveness can restore the people of God to the land which had been promised them. Did the ten northern tribes ever return from captivity? History teaches us that they did Dot return as a people. However, although Amos speaks first of all to the northern kingdom, his prophecy is not exclusively directed to this kingdom. Besides, when James quotes this prophecy he applies it to the Gentiles. Is it not true that Israel “returns” as the Gentiles are brought into the church of Jesus Christ (see Acts 15:13–18)?

The cities which had been wasted at the time of Israel’s defeat will be rebuilt and Israel will inhabit these cities. Not only will they plant vineyards, but they will drink the wine they produce. Gardens will be planted and the fruit will be enjoyed. They will, therefore, remain in the land. It will not be labor for nought. The fruit of their labors will be enjoyed.

God himself will plant them on the land which he had promised to their fathers. His promises stand. He does not forget the covenant made with the fathers. When he has brought the people back, they will stay there. They will not be plucked up again. Jehovah, their God, has said it and be will perform it!

How beautiful is this book of Amos! God sends him to condemn the sins of this people. He cannot keep silence. Nevertheless, his heart grieves as he sees the judgments approaching. He may now conclude his book with a beautiful picture of the future restoration of Israel.

When Amos denounces the sins of Israel he speaks in unmistakable language. Truly, he shows the people how great their sins and miseries are. His pastoral heart can also bleed for this people. Stirring is his description of the blessed future! Such preachers the church needs.

Sin has been portrayed as it really is. But…there is forgiveness. How Amos would have rejoiced to see the day of Jesus Christ! 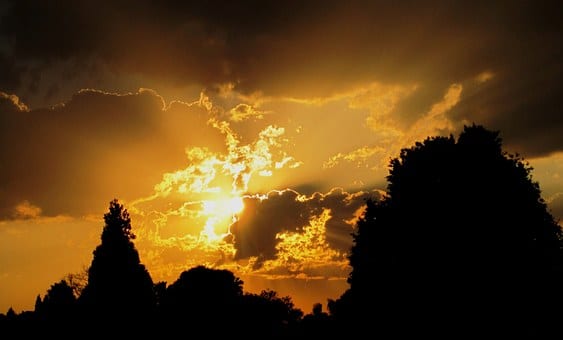 1. Why didn’t the people of Amos’ day consider the nation to be “the tabernacle of David”?

3. Why does the Old Testament speak of future glory in natural or material terms?

4. In which ways was Amos the true preacher of the Word? Is such preaching very popular?

5. Is the preaching on sin sufficiently specific today?