The Capital city of Hungary, Budapest, was two cities prior to 1872. These two cities, named Buda and Pest, were located one on either side of the beautiful Danube. In 1872 they were made into one city. It was a beautiful city, standing nobly astride the famous river. The parliament houses, covering about four acres along the Danube, constituted one of the most magnificent buildings in the world. 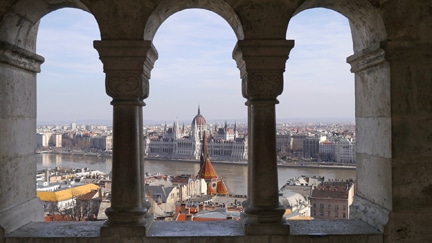 Today the heart of this lovely city lies in utter ruin. The valiant and independent spirit that has always characterized the Magyars finally asserted itself against the enslaving rule of the Communists of Soviet Russia. This desperate bid for “bread and freedom” late in October and early in November called forth retaliatory measures by the Russian masters that have left the entire world gasping. All civilized nations were horrified at the savage brutality, the wanton destructiveness and the sheer butchery of the Soviet counter-measures. Budapest and many other centers of population in tragic Hungary had a bath of blood. And the blood of Budapest speaks in unforgettable tones to the whole world. This voice of the blood of Budapest becomes a haunting voice when one reads eye-witness accounts of what happened in Hungary in those dreadful days. One such account appears in the November 19 issue of Newsweek. Another appears in the Saturday Evening Post of December 15.

According to several estimates it seems that about thirty thousand of these brave men, women and children died in this desperate and pitiful bid for freedom. Many more thousands were wounded. And again many more thousands have been deported to those awful places where Russia brings those who want to be free. In spite of this frightful toll the spirit of rebellion has not been quelled. Although the outlook must seem hopeless, a dogged persistence has kept the flickering flame of freedom burning.

As the world witnesses this valiant and unquenchable spirit of liberty fight this tragic battle against the Russian monster, men tremble with anger, grow warm with deep admiration, and become still in wonderment. What feeds this indomitable spirit? What causes men to struggle against such apparently hopeless odds? Yes, the years of bondage and deprivation under Soviet rule no doubt contributed to this desperate effort to break the Russian shackles. And the Magyar spirit has always been one of independence and liberty. Yet, these things do not seem to explain adequately the indestructible fervor of this revolt. A religious factor seems to speak through it all. There is here the spirit of the martyrs who dared face certain death without fear. Newsweek of December 24 gives a clue to the real spirit behind this fantastic revolt when it tells of the chant that was on the lips of a crowd which pulled a statue of Stalin off its pedestal in a Budapest square. “We want our church back” was the chant that fired this determined crowd, according to the Newsweek report.

A look at Hungary’s religious history is revealing. The Magyar tribes established themselves in the plains of the Danube shortly after the year 900. In this century they were largely converted to Christianity and by the year 1000 Hungary was enrolled as “an important member of the federation of European Christian States” (Kurtz ). At the same time Hungary accepted the culture of the West as her choice—a choice which Hungary’s eastern geographical position has made difficult to maintain.

The Reformation made very rapid progress in Hungary. The native Hungarians favored the Reformed position while those of German background favored the Lutheran position. The Reformed faith prospered in Hungary. The city of Debrecen in east Hungary became a strong center of Calvinistic learning. Tn fact the city was known as the “Calvinist Rome.” But those days of Hungary’s glory were short-lived. In 1526 the Turks destroyed the Hungarian army in the famous battle of Mohacs field. The king and the flower of Hungary’s nobility were destroyed. For a century and a half the Turks dominated much of Hungary. And then came the intrigues and persecutions of the Roman Catholics and their Jesuits. The Reformed church lost the dominant position it once held and has never regained it. But tho Reformed church has remained a power in the little country. Today twenty-eight percent of the population is Protestant, with twenty percent of Reformed persuasion and six percent Lutheran. This means that the Reformed churches have had a membership of about two million, with about two thousand congregations or preaching posts. That this one-fifth of the nation’s population with its long history of struggle and tragedy was active in the latest struggle is evident from the fact that the leaders of the Small-landholders Party, which was active in the revolt, came largely from the Reformed Churches.

There is much that we do not yet know about these latest tragic events in Hun· gary. The Roman Catholic church has been able to keep the painful history of Cardinal Mindzenty before the world’s attention through these recent years. Without wishing to detract one whit from his record, we dare venture the guess that the Reformed minority has a record of resistance and loyalty to God’s Word that is no less stirring than that represented by Cardinal Mindzenty. The words of Professor Paul Woolley, church historian at Westminster Theological Seminary, are pertinent here. “The faith of the SCriptures as presented by the Reformers,” says Professor Woolley in the Presbyterian Guardian of November 15, “is a heartening, courage-developing conviction. In the face of a government which demands disobedience to the Word of God, it is likely to produce the type of resistance which is patient, long.suffering and invincible. Some of this appears to have been visible in the recent tenacious opposition to the Soviet controlled and supported government in Hungary. In sixteenth and seventeenth century France the Huguenots, the Reformed part of the population, showed similar tendencies. The history of Scotland, of the Netherlands and of other Reformed areas shows just the same sort of thing. This present further manifestation of the spirit of loyalty to the demands of God rather than to the orders of men is warmly welcome.”

The blood of Budapest speaks in unforgettable tones. In that blood is mingled the devotion of many thousands who believe that only the living God is sovereign over life and nations and that he has given his people freedom in Jesus Christ. That blood has formed a crimson blot on tho troubled history of our times. The conscience of the West is troubled as it cannot turn its eyes from this grim testimony to that spirit that loves freedom and truth more than life.

The blood of Budapest speaks with a frightening eloquence of the depravity of man, of the heartlessness and ruthlessness of those whose lives are not touched by the grace of God and the imperative of his law.

The blood of Budapest calls upon Christians everywhere to be valiantly loyal to the great faith that God has given to them. Let Christians own no master but the sovereign God and no Savior but Christ. Let them be vigilant that they surrender to the state no prerogative and no loyalty that belongs only to God. Let them live, even sacrificially, under the principle that in God alone is our freedom and our security.

The blood of Budapest may not be forgotten. It must haunt the conscience of the West, of every Christian citizen in the West. The God of justice places this burden on our souls. A Godless tyrant whose tentacles reach out from the Kremlin is abroad in the earth. Let earnest prayers rise everywhere that God in his mercy may see fit to deal justly with this enemy of truth and freedom. Let such prayers be persistent, fervent, unremitting. Then surely it will be true that the blood of Budapest has not flowed in vain. The Almighty One who hears the importunate prayers of his children will in his inscrutable wisdom and sure justice somehow indicate to our troubled and burdened hearts how this bestial tyranny shall be brought to its end.