“Let us keep living by that same standard to which we have attained.” Philippians 3:16

“Reformed from what?” “Is that like a Reform School or something?”

Have you ever been asked questions like that when you have told someone that you belong to a “Reformed Church?” “Reformed from what?” How do you answer a question like that? I am ashamed to say I have often attempted to answer that question with an answer that follows along the line of: “Have you ever heard of the Reformation?” And, increasingly in our day and age the answer to that question is, “No.” So, then I try a different tactic, and ask, “Have you ever heard of John Calvin or Martin Luther?” And, occasionally there are those who have heard of Martin Luther, and less frequently those who have heard of John Calvin. But that still does not answer their question very well. So, then I will quickly mutter something like, “We believe in the Sovereignty of God and the authority of the inerrant Bible,” and hope that by this time their eyes will glaze over in disinterest and I can go about my business. What does it mean to be “Reformed?” That is a multifaceted question. It cannot be answered in one article, but, I would like to direct your attention briefly to a passage of Scripture that I believe clearly portrays how we could answer someone’s queries about being Reformed.

The Apostle Paul wrote to Timothy about the church being “the pillar of truth.” A Reformed Church must be “a pillar of truth.” That, in itself would make the church stand out in an age of relativism. Francis Shaeffer once wrote, “Here’s the great evangelical disaster—the failure of the evangelical world to stand for truth as truth. There is only one word for this—namely accommodation.” The church should be a pillar, not a feather, blown by the winds of change.

If the church is going to be a pillar, Paul says, we must know the truth. We can only know the truth through the infallible rule of God. In spite of being entrusted with the infallible, inerrant word of God, the majority of those within the church do not believe in absolute authority. Even among those who are “Bible-believing” Christians a majority say there is no such thing as absolute authority. How can one be a pillar of truth if one does not believe in such a thing as absolute truth?

There is a definite need to return to the basics and commit ourselves to the truth. That begins with a renewed commitment to the Scripture, which we confess to be the revealed truth of God. We must stand boldly on the tradition of those who have gone before us in defending the orthodox confession of our faith. We must believe that there are rights and wrongs; rights and wrongs that people have died for, rights and wrongs that are taught from God’s infallible Word.

All too often churches, even someReformed churches, operate more as a democracy than they do a the-ocracy. We are guided by the majority, rather than following the One. It is certainly a good thing that Jesus did not allow the majority of the Sadducees and Pharisees to convince Him that their way was the best way to go. It is certainly a good thing that Martin Luther was willing to stand alone against the majority. No, it is not always easy to stand alone. In fact, often those who have stood alone for the Word have also died alone. Yet, truth is truth whether the majority believes it is or not. Truth is truth even if the majority says it is false. That is why we, the church, are called to live the truth. Paul tells Timothy that he is writing so that “you will know how people ought to conduct themselves in God’s household.” (I Timothy 3:15). Paul is calling for consistency here. Our conduct must match our confession. Sound doctrine must lead to sound living. Paul’s focus seems to be upon our conduct within the church, but our conduct within the church cannot help but flow into the world. Francis Schaeffer once wrote, “The true Christian is not only to teach truth, but to practice truth in the midst of relativism.” However, Schaeffer followed that with a warning such living will “bring confrontation—loving confrontation, but confrontation.” Confrontation is something that we are often very wary of. We do not want to offend anyone. We want to be nice people, and be liked by all. So, we carry out our Christian lives somewhat like pastel “Precious Moments” figurines; we are cute, attractive, and appealing.

We need the reminder from time to time that the Gospel is offensive. The Bible says, “Jews demand miraculous signs and Greeks look for wisdom, but we preach Christ crucified: a stumbling block to the Jews and foolishness to Gentiles.” (I Corinthians 1:22,23) A bit later Paul says, “The man without the Spirit does not accept the things that come from the Spirit of God, for they are foolishness to him, and he cannot understand them, because they are spiritually discerned.” (I Corinthians 2:14). That doesn’t sound like “Precious Moment” Christianity, does it?

Too often the world cannot see much difference between the way Christians and non-Christians live their daily lives. How about you? Can your neighbors see a difference in you? Are you able to stand for the truth, articulate, defend and advance an intelligent and coherent world and life view?

Abraham Kuyper once spoke a message that needs to heard again. He said, “[Our call] is this: that in spite of world opposition, God’s holy ordinances shall be established again in the home, in the school and in the state for the good of the people; to carve as it were into the conscience of the nation the ordinances of the Lord, to which Bible and creation bear witness, until the nation pays homage again to God.”

Our world calls for separation of church and state. But as a pillar of truth, the church must stand firm as a voice of unfaltering truth in our society, voicing the reign of God into every sphere of life. That will call us to contend with our culture, and challenge the values of our society.

We know that the purpose of a pillar is to hold something up and to support it. Paul is suggesting that the church must hold up the truth in such a way that it is evident to all. Even if the world does not want to see the truth, the church must boldly hold it forth. That implies firmness, not compromise. It implies rigidity, not accommodation.

That may not appear to be the most popular message out there. It is very unlikely that Reformed Doctrine will ever be able to compete with the “Left Behind” series for popularity. However, if churches are not willing to stand firm upon the unchanging truth of God’s Word and the established moral standards of His Word, who will? We may often stand as a minority, as did the Reformers. But, stand we must!

What if Martin Luther had not been inflamed with holy passion to be a pillar of truth? What if he had given in to the majority? What if he would have concluded that there is no such thing as right and wrong? One thing is certain: the whole modern world would be distinctly different.

What does it mean to be Reformed? It means that we are a pillar of truth, as were our Reformed fathers in the faith. We are committed to the truth that is revealed in God’s inerrant Word and articulated in the orthodox confessions of faith. We have zeal to live the truth. Clothed in the armor of God we will stand firm. We live with the realization that every hour, and even every minute of our lives is lived in the presence of the holy majestic God. We will have the courage to stand firm, and to stand alone. 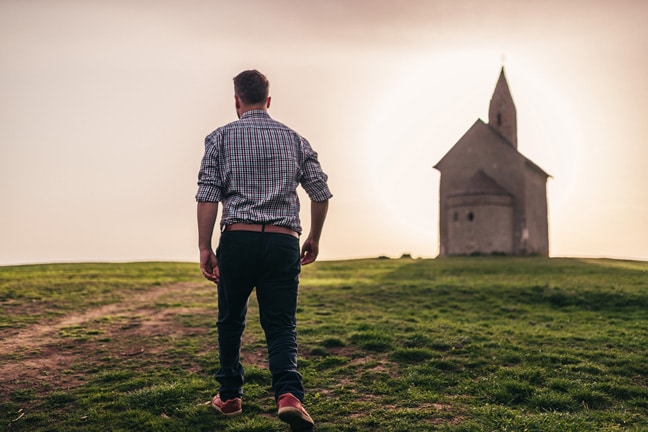 Only the church can stand as the pillar and foundation of truth in our world today.

Rev. Daryl Kats is the pastor of the Cloverdale United Reformed Church in Boise, Idaho.