The heat and humidity of Georgia did not detract from the enthusiasm and excitement of 812 teens and sponsors who converged at Covenant College on picturesque Lookout Mountain. This was the site of the 2012 Reformed Youth Services Convention, which took place from July 22 to July 27. It was another amazing convention, organized for our youth by the RYS director, Ed De Graaf, and the dedicated convention committee. “Soar Like Eagles” was the theme of this convention, a theme taken from Isaiah 40:31 which states, “But those who hope in the Lord will renew their strength. They will soar on wings like eagles; they will run and not grow weary, they will walk and not be faint.”

Rev. Wybren Oord, a pastor from Trinity URC in Lethbridge, Alberta, was one of the key speakers, leading three of the five main sessions that everyone attends. These inspiring sessions focused on what it takes to soar like an eagle. In the first session, we were instructed to wait on the Lord, even while on life’s difficult paths. Rev. Oord’s second session encouraged us to go to Jesus to obtain true wisdom, the wisdom and power of God. Finally, we were comforted by the reminder that God knows all things and that we are His children under His care. This last session gave a message of reassurance, hope, and conviction to soar. Rev Oord is a gifted speaker, and he kept the students’ attention easily with a mixture of his own brand of humor and the compelling biblical truths he declared. I am not just saying this because Rev. Oord is the editor of The Outlook, nor am I saying it because he is also the minister in my home church. He knows how to engage young people with sincerity, truth and laughter. He even flew in his own Eagle mascot!

Rev. William Godfrey is the pastor in Grace URC in Torrance, California, and he was the second main speaker. Rev. Godfrey took a different approach to this theme and passage, zeroing in on the word weary. He first directed us to Malachi, where God describes himself as being weary of worship that is not pleasing to Him. He presented some disturbing statistics of youth leaving the church and stressed the importance of true worship. This was an important message for our youth to hear as they grow up in a world filled with churches seeking to entertain the masses rather than honor God. In Rev. Godfrey’s next session he encouraged the young people not to grow weary of doing good. He spoke of the need for prayer and the proper use of the Word and sacraments to help us in this life. He clearly pointed us to Jesus, who conquered sin and death. Rev. Godfrey’s style was straightforward, and he enabled us to hear the clear gospel call. RYS was blessed with two main speakers who both encouraged and uplifted those present.

It was truly a joy to experience the singing at the RYS convention. Julie Bussis selected beautiful hymns and songs with biblical words. Julie, Rip Pratt, and Brent Cooper led the times of singing in such a way that the joy of the Lord was evident. The students participated willingly, and the sound of all those young voices praising the Lord on high was music to everyone’s ears. Julie also led the RYS choir, a choir that closed the talent show on Thursday night. With only three short practices, this choir came together and raised the chapel roof in song!

Besides the main sessions, students selected five workshops from a list of ten possibilities. This year’s workshop leaders were Rev. Jason Tuinstra, Rev. Greg Lubbers, Mr. Rip Pratt, Rev. Paul Murphy, Rev. Phil Vos, Rev. Quentin Falkena, Rev. Matt Nuiver, Mr. Tim Scheuers, Rev. Steve Bussis, Rev. Hank Van der Woerd, Rev. Doug Barnes, and Rev. Steve Postma. The workshops covered topics such as putting self-love to death, Christian principles for stewardship, the Reformed Confessions, and training for the Christian life. One of the main comments heard from students is that they wish they could have gone to all the workshops! That is a good problem to have.

Each day at RYS is packed full from start to finish, yet each day began and ended with devotions. This important aspect of the convention set the tone for the day and then closed the day with thanks to our Lord. In between, we all learned from the sessions and workshops, enjoyed delicious food, and participated in many activities. The heat outside did not deter the avid tennis players, die-hard soccer fanatics, or crazy 5K runners from competing. It may seem impossible, but the gym was even hotter than the outdoors, yet the students endured the sweltering conditions and competed intensely in volleyball, basketball, and dodgeball. Smarter students, no pun intended, beat the heat and played Bible Jeopardy or Minute to Win It in the cool, air-conditioned buildings. Thursday was the Day Away to white water rafting or to Chattanooga. Then the talent show wrapped up that day, ending it with laughter and music. 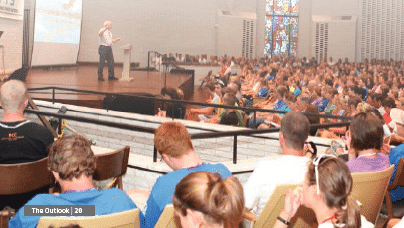 Friday is always a bittersweet day, as the young people say good-bye to the new friends they made during their time at RYS. It is truly a blessing to have a time and place where Reformed youth from all over North America can come together in faith and friendship. The RYS 2012 Convention was a huge success, and those present were pushed from the nest and taught to soar like eagles!

Mrs. Anne Konynenbelt served as a sponsor to the 2012 RYS Convention. She is a teacher at Immanuel Christian High School and a member of Trinity United Reformed Church in Lethbridge, AB.