Someone recently gave me an article written by a pastor who was bemoaning the fact that the vast majority of Americans have apparently become oblivious to the essence of December 25. He writes a now familiar refrain, “Does it seem that we have forgotten whose birthday it is? Christmas is our Lord’s birthday. He is the reason for the season. He came with a purpose: to ‘save his people from their sin.’”

In these Southern states where the vestiges of “old-fashioned” Christianity still linger, you can still see sweatshirts emblazoned with “Jesus Is the Reason for the Season.” But that’s not the norm. With the exception of Salvation Army bell-ringers, what one hears in much of America these days are the whirl of computerized cash registers, the noise of thronging mall shoppers, and an occasional carol played over the radio. Christ is simply not in the picture, or if He is then He is so far out of focus as to be unrecognizable.

So the real meaning of Christmas largely passes into oblivion. True believers wring their hands in despair, merchants rub their hands in delight, and the Father in heaven probably washes His hands of the whole thing. Yet, I would venture another way of looking at this marvelous and almost mystical time of the year.

I suggest that only those who have come to know and love Jesus Christ as Savior and Lord can truly celebrate Christmas. It is not for those who don’t know Him anymore than one can genuinely make merry over the birthday of a child in the next county whom they’ve never met. It’s a time when only those who have been “born from above” (to use Jesus’ phrase in John 3) can rejoice in the incarnation. 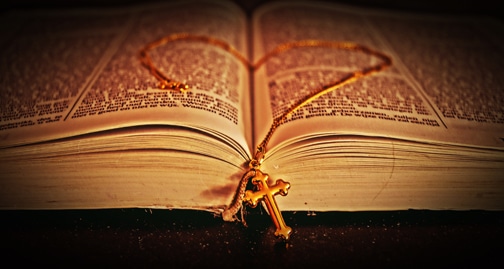 So when I see people all around me buying out the store with money they don’t have, and when I hear of office parties that turn into bouts of “liquid cheer” because their joy is so desperately shallow, and when blind guides of the blind preach from their pulpits of a manger with no cross and a god with no gospel, I am not in the slightest surprised that they have no real understanding of what this time of year is all about. It is neither fair nor reasonable to expect strangers to come to a birthday party of one whom they have never met.

So what should genuine Christians do this time of year? Why not redeem the day and make it all it was meant to be? By all means purchase some appropriate gifts as a means of expressing your love, but especially as a tangible way to remember the gift of the Father in the giving of His own dear Son. By all means put up the lights, trim the tree, ring the bells as a reminder that Jesus is the light of the world, the one who brings evergreen life to barren hearts, and that is reason enough to ring every bell that was ever made.

And finally, in your attempt to take back Christmas for the glory of Christ, please don’t curse the darkness—simply light a candle. If you know the Lord, then invite someone who doesn’t to meet your best friend and Savior of sinners. Invite your neighbor, coworker or relative to a different kind of party this Christmas. Invite them to see the manger in the light of the mission of which Jesus spoke when He said, “I have come to seek and to save those who are lost.”

It’s not about Saint Nicholas or tiny reindeer or presents under the tree. It’s about a baby who was born to die on a Roman cross so rebels like you and I might become brands plucked from the fire for the glory of God. Based on that truth, I can confidently wish you a most blessed and Christ-centered Christmas.