Key Verse: “…and when the Chief Shepherd appears, you will receive the crown of glory that does not lade away.” 1 Peter 5:4

The letter of 1 Peter was written to a number of churches throughout Asia Minor, each of which bad been built under the careful eye of the apostles and their fellow missionaries. This care included appointing elders in every congregation (Acts 14:23) who, like those in Ephesus, had been commissioned to shepherd the flock of Christ entrusted to them (Acts 20:28).

Peter’s instruction in this chapter to the elders and the younger people must be interpreted in the context. of those experiences of persecution be had been discussing in the preceding chapters. Church leaders bear a special burden within the congregation in limes of stress and affliction. They must protect believers who are in danger of backsliding on account of persecution. Moreover, even as Christ emptied Himself for His sheep, so elders must serve as examples to the flock of selfless sacrifice.

Before proceeding to consider the verses of our passage, we should say something about the choice of our passage and the identity of those Peter is addressing.

Because verse 5 begins with the word ‘likewise: it seems to belong with the preceding verses, offering us a contrast with the category mentioned in verse 1, “the elders.” But in the second part of verse 5 Peter turns his attention from a particular group within the church to the whole congregation, so we will study that part of verse 5 along with verses 6–11 in our next lesson.

The two groups mentioned in this passage—the elders and the younger people—are not two classes of officebearers. To be sure, the elders are the leaders in the congregation, especially responsible to care for and supervise the whole church. It seems that the younger people constituted a particular group of members who may have been in danger of bringing into the church a spirit of autonomy and independence which was cultivated in the political and social world. For them, accepting the authority structure of the church was crucial to healthy fellowship among the pilgrim community.

The opening words give us a profound insight into the nature of church office: “The elders who are among you I exhort…” The elders do not stand above God’s people, but among them, in their midst. Peter’s description suggests that the congregation forms a circle around the elders who stand in the middle. (Question 1) 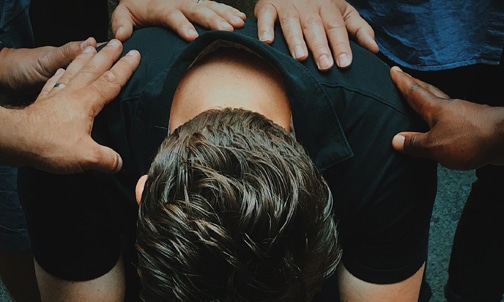 Peter identifies himself as a fellow elder. Called by Christ to be a disciple from the beginning, he alludes here to his post-Easter restoration to office by the Savior who had commissioned him with these words: “Feed my sheep!” Peter’s writing now corresponds to that mandate.

The instruction he is about to give arises also from his identity as “a witness of the sufferings of Christ.” Peter had seen with his own eyes the suffering inflicted by the crowds. by the scribes and Pharisees, by the soldiers and even by the Master’s own followers. His experience as eyewitness had formed his pastoral (shepherd-like) heart, so he could pass along an authoritative recipe for the elders of the Asia Minor congregations.

Yet another designation he mentions: Peter is also “a partaker of the glory that will be revealed.” His words may recall the Transfiguration, where Peter, James and John had beheld the heavenly glory of Jesus Christ pulled, as it were, from the future into the present. This experience qualified Peter with a vision of the destination God has in mind for His people—people who need to be protected and preserved for the coming glory.

The mandate and manner of shepherding (read 5:2–4)

The exhortation to the elders is simple: “shepherd the flock of God which is among you.”

It is noteworthy that although the work of elders is described in terms of shepherding, they are not called shepherds. When Paul speaks of “the evangelists and the shepherds and teachers” (Eph. 4:11). he groups together “the shepherds and teachers” as those who are responsible for pasturing the flock with Christian teaching. God alone is Shepherd, and in 1 Peter 5:4 Christ is called “the Chief Shepherd,” reminding us of His own self-designation in John 10:11–16 as the Good Shepherd.

A second remarkable feature is Peter’s description of “the flock of God among you.” Earlier he had addressed the elders encircled by the congregation, but now he speaks to the elders who encircle the flock. This flock is entrusted to the elders for their care and keeping. It is precisely these two activities that form the heart of elders’ work. In 1 Peter 2:25 the apostle “had identified Jesus Christ as ‘the Shepherd and Overseer of your souls.” The Savior’s shepherding love is reflected in the elders’ careful pasturing of the flock, and His watchful compassion is shown in the elders’ protection of the flock.

A threefold contrast shows how this work must be done. Peter warns against three sins that are particular obstacles for elders: sloth, avarice and domination (Calvin). In the face of persecution and slander elders must keep their enthusiasm and eager initiative. The greatest reward is not monetary profit, but the unfading crown of glory awarded by Christ (see v. 4). Pasturing and protecting the flock requires that elders use gentleness among the portion of the congregation entrusted to them. The phrase in verse 3, “over those entrusted to you” suggests that the elders were appointed to care for a particular part of the local congregation, much like the “districts” or “parishes” in many Reformed and Presbyterian congregations. (Question 2)

In each of these ways elders must be examples to the flock. The suggestion underlying this exhortation is that the conduct of officebearers strongly affects the style of the congregation. Where elders are lazy, position-oriented people-pleasers, the congregation degenerates into a social club where majority rules rather than Christ and His Word. But where elders are enthusiastic, eager and exemplary in applying the lOving care of the Chief Shepherd, the flock—though persecuted from every side—lives contentedly in the world.

The promised reward for this kind of performance of office is grand: an unfading crown of glory given personally by the Chief Shepherd Himself! Not an exalted position of power in His kingdom, nor a share of His royal booty, but a crown conSisting of unfading, untarnished glory—that is: a share in the victory of Christ Jesus Himself.

Submission among the younger ones (read 5:5a)

The effective function of officebearers in the church requires the proper response and cooperation of those who are called to follow. Peter turns to a particular group in the churches of Asia Minor when he writes, “Likewise you younger people, submit yourselves to the elders.”

The word “likewise” emphasizes that “the elders” and “the younger ones” are together under Christ Jesus. It is especially the younger ones who must respect the elders’ authority so that the care and protection of the flock may prove beneficial. When younger people “get out into the world,” they need to think and act independently of their peers. Moving away from living under direct parental authority can lead to conflicts in the church as wen as in the family. For the sake of congregational stability, younger members must govern their natural impulse toward independent action and toward challenging the status quo. (Question 3)

Back in chapter 1 the apostle had identified his readers as privileged pilgrims, elect and holy, full of grace and peace. These pilgrims are very much like sheep who need someone to provide food and water, protection and direction. These pilgrims who live among pagans are like sheep being attacked daily for Christ’s sake. Their survival depends on the right order of the church. The flock of Christ must be led—and must willingly follow! in the green pastures of His Word, guided by His rod and staff along the narrow paths, through shaded ravines, up to the luscious pastures where they may lie down along the quiet streams of divine mercy and grace.

Once again we learn how the church’s internal purity and faithfulness is so essential for her external warfare. Beware, then, of false dilemmas, of wrong choices often forced upon us, which view the church’s internal purity of doctrine and life as less important than her outward mission. The proper exercise of office and respect for office is needed in order that believers may endure persecution at the hands of a world whose passion is power. But these are needed also in order that the church may bear witness to how real power ought to be used: in protective service and self-sacrifice.

Elders, the sheep entrusted to you by Christ need you to be faithful to our Lord in terms of these verses. Church members, Christ’s elders need your submission and cooperation according to these instructions. Together strengthening one another, the congregation will thereby be a witness for good among pagans, shutting the mouths of those whose god is the flesh, whose end is destruction. Take care of the internal, for the sake of the external. What God has joined together let no man put asunder! (Question 4)

1. Read and study Acts 20:28–31. On the basis of this passage, list several duties that belong to elders. What are the implications for the elders and for the congregation of the fact that the Holy Spirit appoints overseers?

2. Mention some reasons why elders (and pastors too!) might be lazy, greedy and domineering in the exercise of their office. What are some practical steps elders and pastors can take to avoid each of these three sins?

3. Discuss the wisdom of assigning one or two elders especially to the young people, young adults or young couples in the congregation. What are some good reasons for doing this, and what are some possible dangers?