Key Verse: “To the pilgrims of the Dispersion…elect according to the foreknowledge of God the Father, in sanctification of the Spirit, for obedience and sprinkling of the blood of Jesus Christ: Grace to you and peace be multiplied.” I Peter 1:1–2

I Peter: Suffering as outsiders without selling out

To read this little letter through in one sitting will take about as long as it takes to read most Reader’s Digest articles. Try it once, and as you read, write down the references where Peter uses the word suffering. For you sec, throughout church history believers have understood suffering as one of the main themes of this epistle. (Question 1)

Peter speaks of suffering in two senses: Christ’s sufferings and Christians’ suffering. Later we’ll look closely at the relation between these two.

But there’s more in 1 Peter. Notice how much instruction, how many commands Peter gives—about holiness and goodness, about submitting to rulers and loving husband or wife.

It’s almost as if for Christians, suffering and tension and struggle in this world are facts of life; you can count on them. If Christ suffered, so will His followers. Ah, but how you suffer makes all the difference in this world! 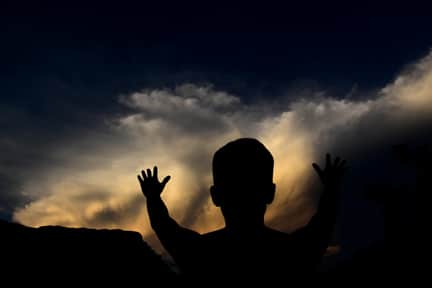 That Christians will suffer for Christ. as well as how amI why they suffer, are all explained by the believer’s position of being a pilgrim among pagans. A pilgrim is someone who is underway to a new land. His travel requires that he pitch his tent in a certain place temporarily, perhaps longer than he first expected. Temporary—that’s a good word to describe a pilgrim’s way of life. One word that crosses the pilgrim’s lips frequently is someday, as in: “Someday things will be better,” and “Someday we’ll enjoy life without pain and sorrow.”

Christian pilgrims living among pagans need to know how to suffer without selling out.

Two extremes tempt such pilgrims in every age:

(1) isolation, or running away from the tension of living as pilgrims among pagans; and (2) accommodadion, or surrendering in the struggle to live as pilgrims among pagans. Notice that both of these solutions eliminate the tension of living as Christians in the world. One withdraws from the world, the other waters down the faith.

Here then you have the theme of 1 Peter: living as Christian pilgrims among pagans.

As we get underway with these studies, ask the Lord to work in you and on you so that at the conclusion we will gladly pray with the apostle Peter:

May the God of all grace, who called us to His eternal glory by Christ Jesus, after you have suffered a while, perfect, establish, strengthen, and settle you. To Him be the glory and the dominion forever and ever. Amen (I Pet. 5:10–11).

The Rock: Messenger with authority (read 1:1)

“The Rock” is the name of the writer of 1 Peter, referring of course to Simon Peter. When he made his rock-solid confession that Jesus is Messiah, Jesus responded with a wordplay: “You are the Rock, and on this rock I will build my church” (Matt. 16:18).

Peter simply calls himself “an apostle of Jesus Christ.” No defense of his authority and no further identification are needed. As Christ’s apostle Peter labors under His claim and enjoys His support. That’s all these readers need to know in order to receive his letter as an authoritative message from Christ Himself.

Residents who never feel at home

Who are the readers of this epistle? Peter describes them as “elect pilgrims.” Think about that a moment: isn’t this a contradiction in terms? A pilgrim is an exile seeking temporary asylum in strange land, without roots in any community. Yet, these readers are elect pilgrims, privileged with a status and calling from God Himself! Moreover, God’s calling and election were the reason for their radically changed lifestyle. Their faith commitment resulted in both a new relationship with God and an estranged relationship with society.

You see, anyone in Christ is an alien in the world. We can take this idea a bit further: an alien is someone who on certain levels of existence is alienated in society, living in constant tension and with a constant sense of uneasiness, distance and discomfort. (Question 2)

Unlike many of the apostle Paul’s readers who were gathered in cities like Corinth or Ephesus, these readers were scattered widely throughout the Roman empire. Take out a map of Asia Minor and locate the regions of Pontus, Galatia, Cappadocia, Asia and Bithynia. You’ll see that these could have formed the circular route Sylvanus (also called Silas; see 5:12) followed as he brought Peter’s letter to the churches in those places.

Chosen for pilgrim style by the triune God (read 1:2)

The meaning of their election as pilgrims is developed in verse 2. They were chosen by the triune God. Notice the prepositions describing this election: their election occurred

• by virtue of the Father’s pre-ordaining knowledge,

• in sanctification (the setting apart) of the Spirit, and

• unto obedience and sprinkling with the blood of Jesus Christ.

Notice too the order of the Divine Persons (Father, Spirit and Son), indicating the order of God’s work which the readers had experienced in their lives.

Let’s consider each of these descriptions.

First, the Christian pilgrimage roots in the Father’s pre-creation plan. God was Father—and believers were His children—before time began! What comfort for exiled believers: they were children before they were pilgrims! (Question 3)

Next, sanctification—or separation unto holiness—designates the means by which God’s choice takes shape. The Spirit, sent from heaven, carrying the Word of God into human hearts, equips believers for their divine calling. He does this by separating them from sin, making them serviceable to God so that He can employ them in His service.

Third, the goal of divine election is obedience, a consecration to God comparable to that of Old Testament priests.

Please read Exodus 29:19–21, Exodus 30:22–33 and Leviticus 8:30, where we find Moses’ rules for the careful consecration of Israel’s priests. Both the body and the clothing of the priest were anointed with oil and sprinkled with blood. Blood sprinkling made priestly consecration visible.

This Old Testament practice probably formed the background to Peter’s greeting. The Spirit’s work of separating believers from sin aims at their obedience to God and their consecration unto special service to God. The New Testament sacrament of baptism points to this sprinkling with the blood of Christ and seals one’s entrance into the priestly class. (Question 4)

Peter’s greeting ends with an apostolic pronouncement about spiritual growth: “Grace and peace be multiplied to you.”

This implies, of course, that grace and peace are already present in the church. Grace is the source of the pilgrim’s peace, and both together provide pilgrim strength for living in temporary exile among pagans. The apostle prays that both may be multiplied, that his readers will enjoy both in abundance as they sojourn together.

1. When you read through the whole letter, how many references to suffering did you find?

2. Identify specific examples in your life of uneasiness, distance or discomfort that arise from living as a Christian in a hostile world.

4. If you are baptized, you belong to the “priestly class.” Look up Heidelberg Catechism, Lord’s Day 12, QA 32. What is the calling of a Christian “priest”? What does Romans 12:1–2 say about presenting yourself as a sacrifice to God?