I consider the following points to be the keys to the interpretation of chapters 8 and 9:

1. Just as lampstands with their lighted lamps produce seals, so seals bring about trumpets; that is, just as witness-bearing results in persecution whereby God’s servants are certified, so persecution, in turn, results (by God’s providence) in punishments for the persecutors. (Note: the seventh seal produces the trumpets.)

2. These punishments are universal in their scope: the Lord afflicts those wicked persecutors on land (first trumpet, Rev. 8:7), sea (second trumpet, verses 8 and 9), rivers and fountains (third trumpet, verses 10 and 11), and even by means of the heavenly bodies (fourth trumpet, verse 12). And so also for the woes mentioned in chapter 9. Moreover, this happens throughout the entire dispensation.

3. The first four trumpets harm the wicked in his physical being; the last three bring about spiritual anguish: hell itself is let loose. Therefore, the last three are more terrible than the first four, as is also indicated by the voice of the eagle (Rev. 8:13).

4. The fact that trumpets concern and warn especially the wicked and are thus contrasted with seals which certify the righteous is clearly indicated by comparing Revelation 6:9 (for the seals) with 9:4 (for the trumpets).

5. The trumpets do not symbolize single and separate events in history. They refer rather to woes that take place any day of the year in any part of the globe. The description-for example, “a great mountain burning with fire cast into the sea”—is simply a very vivid picture, one might almost say a cartoon; better still: motion-picture, representing all warning woes on the sea throughout the dispensation.

If you let go of this important fact your attempt to explain these trumpets will be hopeless. If each trumpet indicates just one definite event that is to happen on one definite date in history and at one definite place, who will ever be able to state with any degree of certainty to which event it refers?

6. The series of woes indicated by these trumpets have their origin in heaven. Note that hail and fire are cast upon the earth, that the great star falls from heaven, etc. What a comfort to know that God takes note of the persecutions which his children have to endure, and punishes the persecutors!

7. The secondary cause of these trumpets is the prayer of the Church. Trumpets are God’s answers to the prayers of God’s persecuted servants. What a comfort to know that in a sense “the prayers of all the saints” (read verses 3–5) rule the world!

8. Trumpets warn. They indicate God’s warning judgments. They must not be confused with bowls which are poured out, and indicate God’s final wrath (chapters 15 and 16). 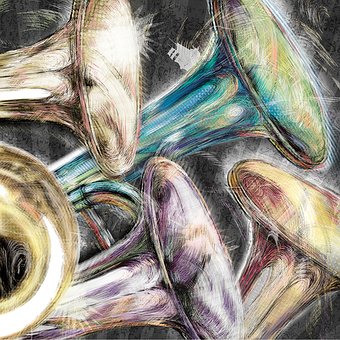 1. How do you explain “the silence in heaven about the space of half an hour”? Read verse 1. Is there any comfort in this?

2. Why do the prayers of the saints have to be incensed (verse 3)? What comfort is there in this?

3. Why do you so often read about “the third part”?

4. Is God sincere when he warns the reprobate?

6. What do these warning woes tell us about God’s nature?

7. Do these warnings contain any pedagogical lesson to be applied in the training of children?