This is the fourth in a series of five articles analyzing the Hymn Proposal [HP] that was presented to URCNA Synod 2010. This series is written with the intention of making the members of the URCNA aware of the many changes made in the HP to the songs of the blue Psalter Hymnal [PH].

We begin this article by focusing on the following songs:

These songs from the blue Psalter Hymnal [PH] have been altered in the HP by having the name Jehovah replaced by another name for God. That may seem like a minor change, since only four songs have been modified in that respect. According to an article published in the January/February issue of The Outlook, the committee made this change because the name Jehovah is claimed to be a misunderstanding of the Hebrew text. It is deemed a phonetic corruption of God’s name by the medieval church.

The wonderful name Jehovah has been used by believers for generations. According to an explanation in the New Geneva Study Bible (New King James Version), the name Yahweh was rendered Jehovah in William Tyndale’s English Bible translation (AD 1530). The name Jehovah has been acceptable since the year 1530 or before.

Many Reformed churches have used this name when believers call on God and praise Him. Why is it no longer acceptable in our century to use Jehovah as one of the many names for our God?

We must remember that the HP of Synod 2010 deals only with hymns. What changes will be made to the psalm arrangements when the Psalm Proposal finally comes to a future synod? Will the name Jehovah be deleted from all the PH psalms as well? We currently sing wonderful praises to Jehovah. The following list reminds the reader of some of the well-known psalms: 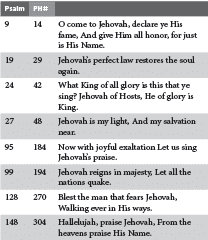 If the name Jehovah will be taken out of our psalms, then we will no longer sing those wonderful words of exaltation to and of Jehovah. Then we will also lose a wonderful heritage. I am not sure if members in the URCNA want such drastic changes made to the beautiful psalm renditions of our PH. However, if Synod 2012 approves the removal of the name Jehovah from the four songs mentioned above [HP #3, 4, 19, and 271] then, to be consistent, all other references to Jehovah will likely be eliminated.

We wonder why the name Jehovah is no longer a suitable name for our God. Until now, we delighted in the name Jehovah and considered it to be theologically sound. We had not been told that it was sinning against God to call on the name of Jehovah. If it is sin to call God by the name Jehovah, then by all means change all the above songs and the more than seventy-four other blue PH psalm versifications that attribute praise, glory, honor, and reverence to Jehovah. Perhaps another committee should be appointed by Synod to determine if it would be more biblical to make such a change.

Thus far, this article has focused on the name Jehovah. We have mentioned that our psalm versifications in the PH give praise to Jehovah over and over. This brings us to the psalms included in the HP that were originally to be taken out of the psalm section of the Psalter and put into the hymn section. Apparently, for some reason, that might no longer be the case. However, in the HP copy I have before me, the following six songs were treated in that manner:

Each of these six psalm selections has been changed to quite an extent. The HP is proposing the many alterations to the hymns we have in our PH in view of the possibility of making a new Psalter for our denomination. The next proposal that will be presented to a future synod for that new songbook will be dealing with all the changes deemed necessary to make our psalms better. According to the two topics of this article—the deletion of the name Jehovah and the changes made to the six psalms discussed in the present HP—the URCNA will be faced with the possibility that almost all of the psalms we have in our blue Psalter Hymnal will be drastically changed in our new upcoming Psalter Hymnal.

If Synod 2012 approves the HP that was presented to Synod 2010, then when we finally get a new songbook, which will include both psalms and hymns, the book will have very little resemblance to our present blue Psalter Hymnal. We will discuss that in more detail in the next article.