I am submitting two articles with the humble hope that they might serve profitably in instructing, reminding, and encouraging present and future office bearers to engage faithfully in their respective duties as office bearers to the glory of God and the good of the church.

The design is a simple overview of the idea of, origin of, character for, induction into, duties of, and guidelines for the respective offices of elder and deacon. Therefore, the structure follows these headings. In pursuit of the goal of being a simple overview, I have aimed for lucid brevity. 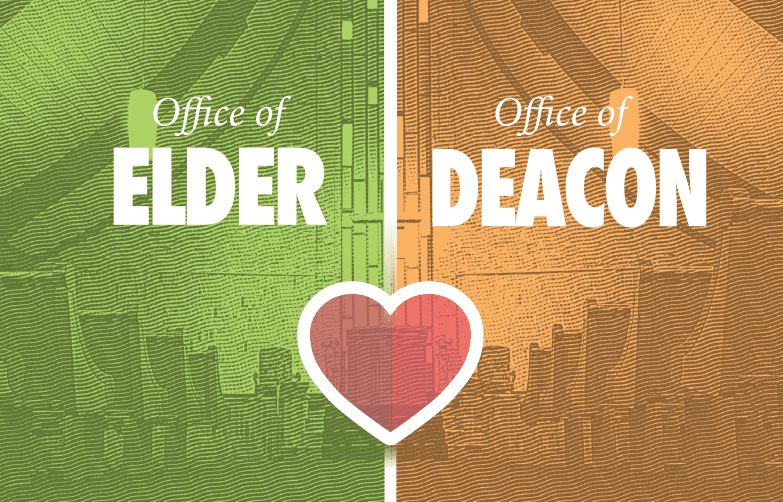 The Idea of an Office

The Idea of the Office in Relationship to Christ

Any discussion of the government of the church and its respective offices must begin with a solemn acknowledgment of the absolute reign of Jesus Christ over and within the church or churches, a reign he exercises through the revelation of his Word and the influence of his Spirit (Eph. 1:22–23; Col. 1:18).

As the divinely appointed Mediator, Christ exercises his authority through the threefold office of prophet, priest, and king (Heidelberg Catechism Q. 31). Given the reality of his ascension and subsequent absence of a bodily presence on earth, Christ is pleased to exercise his ecclesiastical authority on earth among the churches through the instrumentality of men called to the respective offices of elder and deacon (Eph. 4:11). In this connection, we can summarize an ecclesiastical office as “the position of one who has been intrusted [sic] by a superior person with a definite task, and with the authority to perform that task.”1

This relationship to the absolute divine authority of Christ gives the ecclesiastical offices their weight of dignity. The one in the office as well as those underneath the office must appreciate this dignity.

The Idea of Office in Relationship to Authority

If we understand the relationship of the ecclesiastical offices to Christ as the one with absolute authority, we then perceive the basis for a real authority delegated from Christ to his divinely appointed human instruments.2 This authority is derived from Christ by the office bearers,3 and, when exercised faithfully, it is the authority of Christ (Matt. 18:18; Acts 20:28; Eph. 4:11).

The Distinctions within Offices in the Church

Within the churches, pastors or ministers of teaching (teaching elders) exercise the authority of Christ through the proclamation and teaching of the Word of Christ. First Timothy 5:17 reveals that a distinction arose gradually within the office of elder between those who primarily labor in the Word and those who primarily oversee the congregation. This office imitates the prophets of the Old Testament.

Finally, within the churches, deacons or ministers of mercy exercise the authority of Christ in the priestly relief of the poor and oppressed. This office is the channel through which Christ exercises his and his body’s compassion for temporal and physical suffering. This office imitates the priests of the Old Testament.

The Equality of the Offices within the Church

There is to be a plurality and equality within the offices preventing all forms of ecclesiastical hierarchy.4 Within these offices, there is a simple distinction of realms of operation so that no one office should intrude upon the office of another, although there are degrees of overlap as the pastor teaches the elders and deacons, the elders oversee the pastor and deacons, and the deacons show mercy, if need be, to the pastor and elders.

The Origin of the Office

The Origin of the Office of Deacon

We find the divine record of the origin of the office of deacon in Acts 6:1–6. The official institution of this office by Christ through his apostles shows the office to be one that is unique, permanent, and spiritual in nature. In addition, the circumstances surrounding this institution plainly reveal the purpose of this office is the care of the poor and the widows within the churches. The diaconate is the primary channel through which Christ displays his compassion to those in material need.

The Origin of the Office of Elder

The Character for the Office6

The existence of Scripture passages identifying necessary character qualifications (1 Tim. 3:1–13; Titus 1:5–9) shows that not all members within the church are prepared to fill an official ecclesiastical office. Rather, those who are qualified are those in whom the Spirit of Christ, the Holy Spirit, has produced an exemplary godliness (Acts 6:3, 5).

A Character of Personal Godliness

The men qualified for ecclesiastical office are those who display an exemplary personal godliness although not equivalent to moral perfection. They are to be men of sincere, consistent personal piety: “blameless,” “temperate” and “of good behavior” (1 Tim. 3:2, New King James Version).

A Character of Domestic Godliness

In addition, office bearers are to be men of exemplary domestic godliness as their personal godliness displays itself within their own homes. The office bearer is to be a man of sincere domestic piety who is “the husband of one wife . . . who rules his own house well, having his children in submission with all reverence” (1 Tim. 3:2, 4). They are to be men who exercise godly leadership within their homes, thereby exhibiting their personal piety with domestic piety.

A Character of Brotherly Godliness

Finally, office bearers are to be men of exemplary brotherly godliness as their domestic godliness spills out of their own homes into all the avenues of their life. The office bearer is to be a man of sincere brotherly godliness, thereby having “a good testimony among those who are outside” (1 Tim. 3:7) or a man of good reputation among the community by way of a life of consistent personal and domestic piety.

The Induction into Office

The Call to an Office

Christ himself calls men (1 Tim. 2:12) to ecclesiastical office immediately by the direct work of the Spirit upon the soul through an internal call and mediately by the indirect work of human instrumentality through an external call. Both the internal and the external calling are critical for the proper induction into and reception of an office. This is especially necessary to emphasize in our day of ecclesiastical disorderliness. Indeed, “everyone must be careful not to push himself forward improperly, but he must wait for God’s call,”7 and “therefore, no matter how strong the desire of anyone may be to function in a certain office, he cannot consider himself to be called by the Lord unless he is called and ordained by the church.”8

The Internal Call to Office

The reality and the consciousness of the internal call is necessary “in order to remain steadfast against all opposition from within and from without, both in the congregation and in the world. In the midst of all such opposition, nothing but the certain conviction that Christ himself has called him to his office can make an officebearer sic steadfast and immovable.”9 Therefore, every man who assumes an office within the church vows before God in the presence of the congregation to possess this strengthening internal call.10 It is only the presence of this internal call that will motivate the office bearer to faithfulness through the rigors of the duties of office bearing.

The External Call to Office

Corresponding to the internal call is the external call. This call is an officially extended summons by Christ through the local church for a man to serve within a specific ecclesiastical office for a specific duration of time. Christ himself is the ultimate source of this external call (Eph. 4:11), but he employs the congregation as the advisory source, thereby identifying the men whom he has chosen (Acts 6:5; 2 Cor. 8:19; Belgic Confession, Article 31). Furthermore, the council functions as the instrumental source in extending the external call.

When a man has received the internal and external call, there must be an ordination and installation into the respective office before there is an assuming of the authority and responsibilities of the office. The ordination and installation is the public induction of a called man into an official ecclesiastical office. “Ordination is the solemn expression of the judgment of the Church, by those appointed to deliver such judgment, that the candidate is truly called of God to take part in this ministry, thereby authenticating to the people the divine call.”12

Since this ordination is the declaration of the judgment of the church, it should be done by an ordained minister of the church underneath the supervision of the elders of the church within the corporate gathering of the church. It publicly indicates to the congregation that Christ himself is placing the man into office. Ordination and installation is vital, for no man can assume the duties of an ecclesiastical office without Christ placing him into that office.

Within the ordination and installation, the laying on of hands can be employed representing “a symbolical indication of the fact that one is set aside for the ministerial office in the Church.”13 In addition, at this time, the ordained and installed man takes solemn vows in the presence of God and his people to fulfill faithfully the duties of the office.

The Length of Office

When it comes to the question of the length of a man’s duration within office, there is considerable debate between a limited or lifelong tenure. Both views can present advantages and disadvantages. Some have sought a mediating position by advocating a lifetime holding of the office but a limited service in which the office is exercised. Officially, the United Reformed Churches in North America (URCNA) have deferred on the question by stating, “Elders and deacons shall be elected to a term specified by the Consistory.”14 Within many of our ecclesiastical traditions, limited tenure was the norm with two- or three-year terms.

1. The word office comes from a Latin word meaning “work” and is “an official, appointed task with special duties and dignity” (Michael Brown, ed., Called to Serve: Essays for Elders and Deacons [Grandville, MI: Reformed Fellowship, 2006], 2); the definition of office bearers is from William Heyns, Handbook for Elders and Deacons (Grand Rapids: Eerdmans, 1928), 19.

3. This truth of “derived authority” will naturally limit the scope of an office bearer’s authority. It extends no further than the revealed will of Christ.

5. One could trace the historical origin of the Old Testament “elder” to Jethro’s advice to Moses in Exodus 18.

6. The following threefold division of the necessary character is summarized in Liturgical Forms and Prayers of the United Reformed Churches in North America’s Form for the Ordination of Elders and Deacons, which states that “the deacons, as well as the elders, should set an example of godliness in their personal life, in their home life, and in their relations with their fellow men.”

10. Therefore the Form asks, “Do you elders and deacons feel in your hearts that you are lawfully called by God’s church, and therefore by God Himself, to your respective holy offices.”

Rev. Greg Lubbers is currently serving as Minister of the Word and Sacraments at Covenant Reformed Church (URCNA) in Pella, Iowa.