The judgment is coming closer. It began in far-off Damascus. It has circled about Israel (consult a map). The whole surrounding heathen world is on fire. The thunder-claps are becoming louder. Now it strikes Judah! God’s covenant people! Jerusalem, where his Dame would dwell forever I Israel has listened with increasing interest to this prophet. but this particular prophecy disturbs them. However, the storm is still some distance away and there is no immediate danger. Besides, Judah has been no friend of Israel for many years even though they are closely related. And Judah always considered herself a little “better” than Israel. Was not the temple in Jerusalem? Were her kings not of the line of David to whom the promises had been given? Now the fires of God are coming to devour the palaces of Jerusalem. Surely; this will slay her pride.

Again the same formula is used. “For three transgressions of Judah, yea, for four, I will not turn away the punishment thereof’ (See Lesson II, October issue, page 18). Yet, the transgressions are not so clearly spelled out. The prophet says that they have rejected the law of God; they have not kept his statutes. In other words, it is not so much what they have done as what they have not done. The terrible deeds of the heathen which were described before are certainly worthy of God’s judgment. That is immediately evident. But Judah is not accused of these sins. Her sin is a sin of omission. We usually deal much more kindly with such sin than with the actual sinful deeds. God doesn’t. In his Sight the sin of omission is as evil as the sin of commission. God gave his people his law. Therein he spoke to them. Their sin is that they “just let him talk” and pay no attention. They have ignored him. There is no greater evil than that. 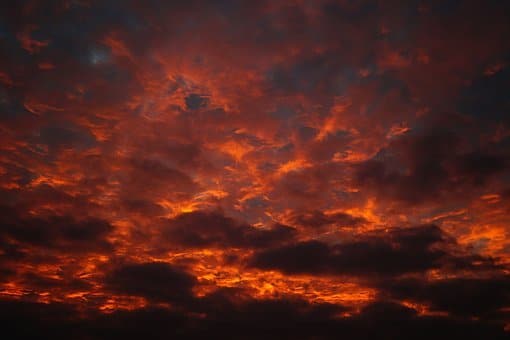 The prophet also refers to their idolatry. Those are “their lies” which “have caused them to err, after which their fathers did walk.” Judah was God’s chosen people. He only was their God. Judah was not satisfied with this relationship. They transgressed the very first commandment. Other gods were imported. Their fathers had done the same thing. But how their fathers paid for this evil! Though history was able to teach them such a lesson, they did not listen but walked the same path their fathers walked. The measure of their iniquity is now full God will send a fire on Judah which will devour the palaces of Jerusalem.

Now the lightning strikes! “For three transgressions of Israel, yea, for four, I will not turn away the punishment thereof.” They should have expected it. The prophet came to Israel to prophesy against Israel. He had spoken of the judgments of God on all the surrounding nations. It was like a tightening noose. The day of wrath has come.

How the prophet goes into detail! Although the other nations had committed many sins so that the measure of their iniquity was full, the prophet mentioned only one sin. Now he names the various evils committed in Israel. The sin of Israel is that it has trodden the poor under foot. There is no mercy. They have sold the righteous for silver and the needy for a pair of shoes. Did they sell slaves so cheap? No, the idea is that they made slaves of those who owed but a very small sum. In Israel one could sell himself to his creditor if his debts became too great. Such a one could also demand the services of the one who owed him money. But, even though one owes very little, the amount necessary for a pair of shoes, as Amos says, he is sold. This goes directly contrary to the whole intent of the law.

They pant after the dust of the earth on the head of the poor. They do not rest until they have brought sorrow to the poor, of which dust on the head is a symbol. The meek are mistreated. There is no justice. The rich become richer at the expense of the poor. God had given his laws to Israel to prevent poverty. He is the defender of the widow, the orphan. the stranger. and the poor. Israel has set the law aside and seeks only its own proSt.

A man and his father go unto the same maiden. The maiden referred to is the one who works in the home of the rich. She is a servant, a maid. Here again we find the oppression of the poor. But the evil-doers go a step farther. Immorality accompanies their greed. Oh, she is only a servant! She belongs to the class who have no rights. Her employer and his son commit immoral acts with her. It is repulsive in every way and goes directly contrary to that which God commanded Israel from the beginning. What can this maid do? She is helpless and becomes the victim of the rich.

Concerning the other nations the prophet mentioned only one sin even though they had committed three, and even four transgressions. Now he mentions all four. These same people, these rich, have taken the clothes of the poor in pledge, as surety. The law stated that these clothes taken in pledge had to be returned before nightfall. That is forgotten. Notice, they now lie down on these clothes beside their altars. They are worshipping! This is the practice of their religion. Some of their debtors were not able to pay in money—so they paid their debts in wine, the product of their vineyards. The rich now drink this wine (on feast days) in the house of their God. What hypocrisy! They are still religious as to form, but the power has been denied. God will judge this people as weH as the heathen who have made themselves guilty of monstrous sins.

The judgments on the surrounding nations were but an introduction to the real intent of this prophecy. Against this background the sins of Israel are indeed black What a masterful approach!

The sins of Israel are common even today. Neither arc they recognized so readily. The sins of heathendom are immediately evident, but Israel sins in such a “civilized” manner. The people that worship may hide sins as grievous as those of the atheist! Israel was complacent but Amos has come to disturb that complacency.

1. Why did the Israelites enjoy the “sermon” of Amos until now?

2. Prove from Scripture that the sins of omission are as grievous as the sins of commission in the sight of God. Do we evaluate them differently, and if so, why?

3. Which idols does modern man serve?

4. Why are the needy also called the righteous?

5. Are the poor mistreated in our circles today? If so. how? Who are the poor? Discuss.

6. What are some of the real danger in our prosperity today?

7. How can it be recognized that ones religion is genuine?