Maryland has the dubious distinction of being the first state to pass a law mandating handgun locks. It does not matter that Governor Parris Glendening couldn’t free a locked handgun without assistance at a news conference called to demonstrate the supposed logic of the law he backs. (A videotape of his failed struggle to unlock the gun is now running as a National Rifle Association commercial aimed at proving the NRA’s point that someone intent on doing harm won’t be waiting for a nervous or frustrated gun owner to unlock a legal weapon before firing his own lock-less illegal gun in the commission of a crime.) It does not matter that, according to noted Yale University researcher John R. Lott, the Clinton administration has vastly overstated the supposed benefits of the Brady law, which seeks to keep guns out of the hands of people with criminal records. Nor does it matter that claims on the number of children who die “every day” from guns are wrong, as are claims that more children are killed by guns in America than the combined total of the next 25 industrial nations.

It only matters that politicians are seen as “doing something” about the “problem of guns” to help “protect our children.” Feelings and perception triumph over logic and facts. 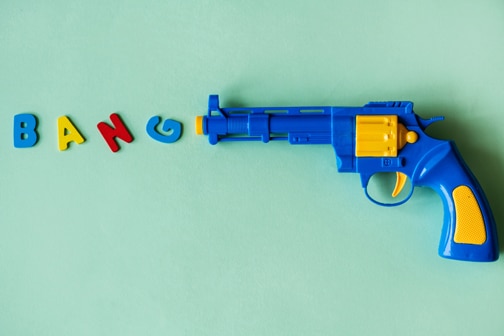 A major reason why laws like the one in Maryland are passed—even over the disapproval of many Democratic legislators who saw it as flawed but voted for it anyway because of the politics—is that stories about the abuse of guns overwhelm stories about how guns have saved lives and defeated criminals. How far would big government get with its ravenous appetite for new laws and more power if the public heard the other side?

Consider this report from the February 2nd edition of The Tribune newspaper in Mesa, Arizona. A woman named Bricie Tribble heard a strange noise in her home shortly after midnight and decided to investigate. She was accompanied by her AS-caliber handgun. Tribble discovered a man rummaging through her purse. According to police, the intruder told her: “I’m going to kill everyone in this house, including you.” Tribble fired at least one shot, killing the man. Police said he had abducted a woman earlier that evening at a nearby Wal-Mart, drove her to a secluded location, raped and shot her. The victim lived and gave police a description of her assailant.

Reports like this, which recounted on the NRA’s web site page but are rarely mentioned on the TV networks, would bring more balance and understanding to the “gun control” debate. Suppose Tribble was so nervous she couldn’t get the trigger lock off her legal gun and become a victim like the other women woman who was assaulted earlier in the evening? Would more gun laws have saved her? Laws already on the books—most of which are not enforced—did not deter the assailant from raping and shooting the other woman. Only a gun used to fight crime, not commit crime, stopped him.

The problem has never been the gun, the knife, or the automobile. It is the intent of the person in possession of the gun or knife or behind the wheel of the automobile that causes tragedy when the car or weapons are used illegally. In the matter of sex education, studies reveal that teaching abstinence prevents the unwanted consequences of premarital sex and that the sex equivalent of trigger locks (condoms, the Pill, abortion, and cultural lessons about promiscuity) do not.

As with sex, our failure to produce the results we say we want has resulted from a lack of self-control, not a deficiency in laws imposing external controls. The concepts of right and wrong and respect for life and property that were taught in previous generations have been abandoned in pursuit of profit, pleasure, and greed in this generation. The moral anarchy that has predictably followed—of which gun violence is only a symptom will never be reversed through law alone, or even mainly. The solution is to focus again on teaching virtue. Gun laws don’t deter criminals. Instead, they can increase crime if government restricts the rights of the law-abiding while doing little to restrain the lawbreakers.