At a recent Redeemer College faculty meeting, we talked about the antithesis. The context was a discussion of Reformed emphases and distinctives in our curriculum—how best to introduce and reinforce them. During the meeting we also talked about tensions resulting from the diversity of church backgrounds represented in the student body. It is sometimes difficult to defend the Reformed faith in one’s teaching without offending students from other backgrounds.

In our age of “political correctness” (PC), people seem to think they have the right not to be offended, or made to feel uneasy at what others may say. While PC has few followers on our campus (it was roundly attacked in the latest issue of our student newspaper), the desire to avoid feeling offended or “excluded” does live on campus. Therefore professors are urged to be very careful in formulating their criticisms of non-Reformed churches and theological traditions. If the good ship Redeemer carries paying passengers from Arminian churches, would it not be wise to soft-pedal one’s disagreements with Arminian theology? This, at least, seems to be the logic behind some of the statements made on campus recently.

On the other hand, there are also Calvinist students who like to see Arminianism denounced and who will gladly draw your attention to the Canons of Dort. One of our professors was criticized for being too polite and restrained in stating his disagreement with Arminianism.

Since I teach philosophy, issues of this sort are my stock-in-trade. I do believe that the antithesis has great significance for Christian education, and so I urge the students to be forthright as they engage in spiritual and ideological battle on our Lord’s behalf. Because philosophy has so much to do with ideology, I supply them with fighting words and also try to model for them the stance of the militant Christian. Some think I go too far in this regard. 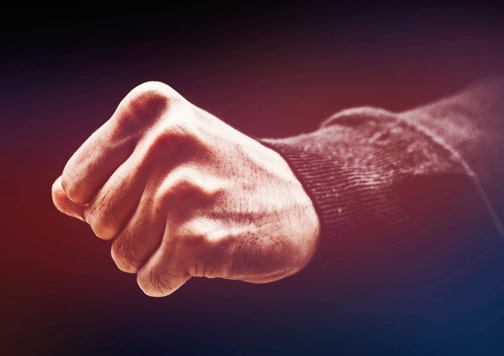 In a philosophy of language course I am currently teaching, I take up the issue of freedom of speech and try to explain how it is that we enjoy such a freedom, on the one hand, while on the other hand we are not free to say whatever we like. For example, we are not free to shout “Fire!” in a crowded theater. In the process, I introduce the well-known philosophical term “performative language,” by which is meant language that does something, language that is equivalent to action. The standard example is the “I do” uttered in the course of a wedding ceremony.

Threats are also performatives. Some threats are legitimate: punishment may be promised by a teacher or parent unless such-and-such an action is performed promptly. But a great many threats are not legitimate. It is wrong to assault someone, and it is also wrong to threaten to do so. The guarantee of freedom of speech does not give us the right to threaten people whenever we feel like it.

Since Christian education is committed to maintaining the antithesis, it has to supply Christian students with fighting words. But this semester I am having trouble winning assent for such an understanding of our task as Christian educators. Many of my students fear there is enough fighting in this world already without us as Christians adding to it. They seem to think that the Christian’s calling is to make peace, and so forth. In my philosophy of language course we study the work of Walter Ong (his fine book The Presence of the Word is required reading), but Ong’s emphasis on polemics leaves many of the students uneasy.

I should add that I do not advocate nasty or contentious conduct for its own sake. Redeemer has recently been refining its stand on the selection of plays to be performed for the public in its main auditorium. In a written submission, I suggested that the plays we select should not include the “profaning and degrading” of “the religious symbols of other religious traditions, such as Judaism and Islam.” I wrote that “at Redeemer we are to take issue with the teachings of these traditions, but we must do so in a civil manner. A profaning of their symbols is not appropriate on our stage.” My suggestion was not adopted; it was thought that artistic freedom should not be restricted through such a guideline.

When my suggestion was discussed at our meetings, the Salman Rushdie affair came to mind and was mentioned. Rushdie’s novel The Satanic Verses includes a critical and satirical account of the founding of a religious tradition with unmistakable resemblances to Islam. It was assumed that Rushdie was in effect lampooning the origins of this religious tradition and attacking its founder, Mohammed. Certain authorities in Iran decreed that he deserved to die for this offense, and thus put a price on his head. The threat was a very serious one; for the last five years or so, Rushdie has lived in hiding, and there have been actual attacks on people connected with the publishing of his novel, leading to at least one death.

My suggestion regarding play selection was not intended as a concession to the fanatics in Iran or as a statement of sympathy for those who respond to criticism with threats of violence and murder. I would defend Rushdie’s legal right to publish such a novel. But I do suggest that Redeemer, in its interaction with people who hold to non-Christian creeds, ought to follow different tactics. I mention this to indicate that my position is not that we ought to throw sensitivity to the wind and ignore the feelings of people when we confront them in the great spiritual and ideological struggle of our age.

The debate about fighting words on Redeemer’s campus recently entered a new chapter when the socialist government of the province of Ontario introduced legislation that would further protect people from feeling criticized or rejected. The legislation in question, called Bill 55, is intended as an amendment to the human rights code. The legislation calls for “equal treatment” and specifies: “Every person has the right to equal treatment without discrimination because of race, ancestry, place of origin, color, ethnic origin, citizenship, creed, sex, sexual orientation, age, marital status, family status or handicap in any public communication made by another person.”

How might one run afoul of this law? The proposed bill goes on to explain that this “right to equal treatment” would be “infringed by a person who makes a public statement or publishes, sells or displays or causes or permits the publication, sale or display of any written material or visual representation that ridicules or demeans a person or class of persons because of race, ancestry, place of origin, color, ethnic origin, citizenship, creed, sex, sexual orientation, age, marital status, family status or handicap….” The list is also repeated in connection with discrimination, in· citing discrimination and expressing hatred. The penalty is a fine of not more than $50,000 (currently equal to about $38,000 US).

The Redeemer community was urged to oppose this legislation. Students circulated petitions and stressed that under such a bill, much of the current Christian opposition to homosexuality would become illegal. Many members of the Redeemer community signed, although some commented that to interpret the threat mainly in terms of the homosexuality issue was to read the proposed legislation in a one-sided fashion. (I agree with this criticism.) But what struck me as interesting and worthy of comment was the quiet but principled opposition to signing that I encountered in some students.

Now, it should be understood that those who refused to sign were not the kind of people who would themselves propose and advocate such legislation. When pressed, they were willing to admit that on the basis of such legislation, a government might well undertake mischievous activity and make a nuisance of itself. Yet they professed sympathy for the impulse behind the legislation, namely, to make sure that people are not ridiculed or demeaned on the basis of the various categories listed in the bill. The students in question did not maintain that all criticism or exchange of views must cease; rather, they argued that criticism must be carried on politely and respectfully. It may be that the Christian vocabulary needs to include some fighting words, but we should find less contentious terms for conducting our spiritual and ideological warfare. Christians are not in the business of fighting or ridiculing or demeaning. And if Christians get carried away in their criticisms, the government may have to restrain them.

I have taken the trouble to put the thoughts of these students on paper to show that in my part of the world, at least, we are living and working under curious circumstances. Many people today are extremely sensitive to criticism and disagreement. No wonder that Redeemer faculty members ask whether the theme of the antithesis, the warfare between Christ and Satan, is still relevant to education.

One special circumstance at Redeemer helps to explain such attitudes. Ever since the CRC Synod of 1990 made its deeply misguided decision regarding women’s ordination, the Redeemer community feared that it would be split over a set of issues that was not of its own making. Our original CRC support body has been divided into two, and a fair number of our students are now members of “independent” churches. The college is also well aware—although it does not advertise this fact—that a number of its graduates have become pastors of these “independent” churches, usually after a period of study at Mid-America Reformed Seminary.

The current CRC issues are debated informally at Redeemer, but on the whole one cannot help but be surprised—perhaps even impressed at how peaceful our campus is during this time of turmoil in the Christian Reformed churches. We have learned to walk on eggs without breaking them. CRC-leavers need not feel that they will be scorned, ridiculed or demeaned because of the stance they have taken during the church struggle. (Bill 55 is not needed for their protection.) And we often tell ourselves that since we have evangelical students from many denominations on campus, we should not bore them with accounts of our troubles and debates in the Reformed community. We welcome those evangelical students with open arms and do not criticize them for belonging to churches that fail to use the Three Forms of Unity. As for students from “independent” churches, we do not hassle them about their church membership either. One gets the impression that all churches are good—perhaps equally good.

How shall we then fight? Or should fighting be given up altogether? It is my own conviction that the notion of Christianity as militant, as engaged in a battle with spiritual foes outside the Christian camp, is a fundamental Biblical teaching that needs to shape and inform the curriculum of a Christian college. I also believe that a continuing discussion and debate regarding Christian truth is needed inside the Christian camp, so that Christians can make clear their reasons for belonging to one church or denomination rather than another. Christian students must be taught how to disagree with one another—respectfully, to be sure, but also firmly.

The socialist-government of Ontario is not helping us by its misguided and dangerous Bill 55. But I fear that the attitudes that give rise to this bill are also to be found within the Christian camp. Did the socialist government put them there? I don’t believe it. If we are sometimes silent when we should be speaking up, I don’t think it’s because we fear a $50,000 fine.

Could it be that we have lost the courage of our convictions? Or are we simply depleted—needing to be renewed, replenished? I hope it is the latter. And if the problem is that we are depleted, I look to the Lord to resupply us, so that when we realize that we are in the midst of a great spiritual battle, we will not be left without fighting words.