And here I come to the Antithesis.*

The more one chooses to close his eyes of the reality of the Antithesis the more he will weaken the Coalition. But the opposite is also true; the more sharply ones focuses his eyes on the Antithesis, the more firmly the Coalition will stand. (Capitals are from Kuyper’s original and the “Coalition” refers to his cooperation with the Roman Catholic party against the parties of the Left). To speak of a finding or a fixing of the Antithesis is nonsense. Independent of what any Statesman may opine or any group of people may affirm, there exists such an Antithesis, which forms the fundamental opposition of our lives. It operates in every sphere and in every sensation of the heart, in every tissue of our thinking, in our antipathies and sympathies, in our entire world and life view, and in the whole of our conception of the personal, familiar, social and political existence.

It exists in our science and in our art, in our jurisprudence and in our pedagogy. It has permeated into everything and in everything it is finding expression in two directions. To say that the people of The Netherlands are one in mind and one in purpose is merely sentimental fantasy. One, thank God, we are when the preservation and honor of the fatherland are at stake, and, we stand as one man in support of the House of Orange. But in the general conception of life (levensopvatting) we are not one, but irrevocably two. Thus it is here and thus it is in all nations living constitutionally; since that which struggles in the hearts of the people looms up in Parliament and comes to expression before the throne.

This was partially so from ancient times, but that opposition has become especially sharp since 1789. In the “Great Revolution” of that year rebellion against the honor of God has even turned the wheel of political liCe; bringing to the top what was under and knocking down what should stand on high. At that time a struggle broke out, a principal struggle, a life-and-death-struggle concerning the question whether the norm for governmental policy ought to be deduced out of the will of man, or from the will of God. Then all those who abandoned Christ and his Cross cried: “Our compass is found in the will of man!” And all those who continued to kneel before the Christ as God revealed in the flesh declared: “For us the revealed will of God remains the only norm!” Thus the opposition of: “Over against the Revolution the Gospel!” arose, and that is the Antithesis, which throughout the nineteenth century and to this day has divided the conceptions of life of our citizens. That Antithesis was not invented or thought up by anyone. That Antithesis is there, it exists, and it dominates our lives completely. Only sometimes it envelopes itself purposely in such a mist so that most men do not see it until the sun again breaks through and every one perceives how this rock of offense ever remains lying directly across life’s pathway, It is on that account that the Liberals continually tried to deny the existence of the Antithesis, because they knew that a clear conception thereof always results in the revulsion of the masses against them (Note: Kuyper is here assuming the basic Christianity of the Dutch nation). That explains the bitterness of the Liberals against Groen van Prinsterer, and against the Calvinists, and their bitterness also in 1905 (the political campaign of that day in which a lot of mud-slinging look place by the Liberals) because, we on our part, tried to open the eyes of the people to the existence of the Antithesis. This they decried as sowing dissension among the people.

But that is not the case.

The dissension that is here considered, is not sown by a single thinker, but by the Christ Himself. And not only did the Christ and does he still sow discord. but he expressed it sharply and without disguise that this was even the purpose of us mission, That Christ came to bring peace to the earth with God the angels sang in Ephratah’s fields. But when men called for unity, concord and peace among the children of men, then Christ spoke as sharply as possible: “I am not come to bring peace upon the earth, but a sword.” Still stronger, indeed, fearfully strong, he expressed himself, when he interpreted the purpose of his coming thus: “I am come to send fire upon the earth: and what will I, if it be already kindled?” And that this did not simply refer to the struggle in the heart but also truly referred to the struggle in life, is incontrovertibly clear from the things Jesus said about family life. “From henceforth five shall be gathered in one house, three against two and two against three. The father shall be against the son and the son against the father; the mother shall oppose the daughter and the daughter the mother, the members of one’s household shall be his enemies, And they shall hate one an. other and deliver each other up.” Words of such burning earnestness that no mere man would have dared to speak them, and only Christ, because he was God, had the authority and the power to speak thus. That this discord should not come to an end at his departure, but was to continue as long as the Gospel went forth into the world, is clear from his parting words to his disciples: “They have hated me, they will also hate you. As they have persecuted me, so will they persecute you. But be of good courage, I have overcome the world.” 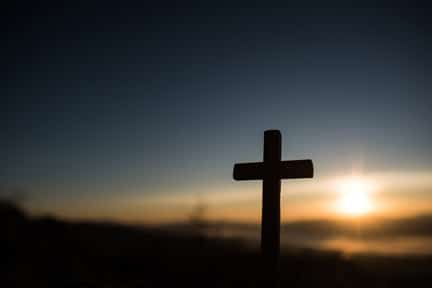 And therefore, when they call to us from the other side: “How can you who call yourselves Christians and ought to seek peace, how can you defend such an Antithesis?” Then our answer is ready that whoever speaks thus has never known the Christ and is a stranger in the Holy Scriptures. But it is certain that whoever among us confesses the Christ out of vital unity with him, such an one may take no other position than that upon which Christ himself has placed us.

And whoever, on the other side, demands of us that we close our eyes to the Antithesis, does violence to our conscience, by actually demanding of us to deny that which Christ has imprinted upon our minds with such awe-inspiring seriousness. After all, the Christ is, according to the prophets and apostles, “the stone of stumbling and the rock of offense.” That was the mission of the Son of God in this world. And this naturally gave rise to the Antithesis in our lives. Disguising this fact is of no avail, and to close one’s eye to it is like a game of blind man’s bluff. There is not even any ground for temperate witnessing. Jesus, who never spoke other than with serious intent, has systematically avoided every moderate word exactly on this point. To express the Antithesis more cuttingly than Jesus did is not possible. On whatever point there may be conciliation, it is not on this point” (pp.15–18, Wy Calvinisten, Kampen: J.H. Kok, N.V.,1909.)