The torch may have indeed been passed to a new generation, but the light has gone out on the social and moral issues that are the heart of our nation.

“We are the children of the modern age.” said Vice President-elect Al Gore on election night. Who are these “children” now poised to take over the country? 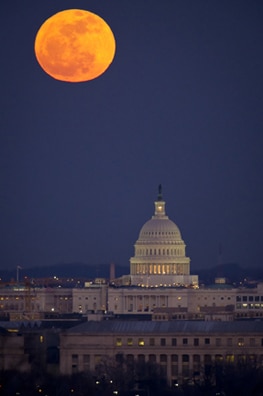 They have given us “recreational” drugs, condoms in the schools, AIDS, unprincipled television, open marriages, no-fault divorce, prenuptial agreements and a nuclear strike on the home. For many, the physical, moral, psychological and spiritual consequences of unrestrained living are now being worked out on psychiatrist’s couches. Rolling Stone Magazine surveyed these modern children and found that more of them are seeking psychiatric help than any other generation.

To many who grew up in the ‘60s, wholesomeness referred to the quality of food, not lifestyles. Because Hugh Hefner had convinced them that their sex organs were personal play toys, abortion became a necessity in order to avoid the short-term consequences of freelance sexual recreation.

The Constitution presumes a moral order, a set of shared values, a code of ethics that is to be enforced by law if not willingly embraced by the Citizenry. Most of the founders held to the view that man was flawed (some even called it “sin”) and could not be counted on to always do what was right. as they put it in the preamble, to “promote the general welfare.” That is why they saw the need for laws to regulate the behavior of those who would not be constrained by a power higher than their own personal whims. As Housing Secretary Jack Kemp has noted, “Democracy without morality is impossible.”

But the advent of moral relativism following the expulsion of Bible reading and prayer from public schools in the ‘60s and the legal system’s growing antagonism to anything not of thIs world put the government in the place of God and sought to make man the focus of worship. This led to the denunciation of what was once considered pure and holy and good and the elevation and promotion of that which once was regarded universally as vile and decadent.

A look at our culture’s contemporary heroes offers convincing evidence of this shift in moral leadership. Whom do we admire? Magic Johnson, Madonna—those who engage in sexual activity outside of marriage and who promote such activity to others. Which of the television programs enjoy the highest ratings? “Donahue” but when was the last time he did a show on fidelity, chastity and commitment, unless it was about “freaks”?

A culture without eternal values, without virtue and morality as its foundation cannot long survive. This is the lesson of history; but the closest we get to history today is the instant replay. As children of the modem age would say, we “don’t stop thinking about tomorrow,” but seldom think further into the future. So many liberals have dismissed organized religion and the power of spiritual ideas from the center of public life. Some conservatives, meanwhile. attempted a shotgun marriage between evangelicals and the Republican party which made religious concerns no greater than those of any other special interest group. The pious were wrong to think that a kingdom not of this world could be ushered in by a temporal kingdom.

The baby boomers now have two of their own in national leadership, am Clinton and AI Gore reflect their values. But the issues that will cause tomorrow’s generations to judge us favorably or with disdain have little to do with economic matters and more to do with eternal values. Want proof? Try to find in textbooks or among the monuments and memorials we erect to those leaders in the past any favorable references to their economic policies.

“What shall it profit a man if he gains the whole world but loses his own soul?” is still history’s greatest question. Clinton and Gore deserve a chance to rectify the economic mess, but unless they and we address the inner mess, in four years, in eight years, in 100 years the light that once illuminated a path worth walking will not have been rekindled. and America, which has been a beacon to the world. will find itself in eclipse.