!n 1957, E. J. Young, a professor of Old Testament at Westminster Theological Seminary in Philadelphia, wrote, “To say that Christianity is now at cross-roads is to engage in the trite and the commonplace.”1 If that was true then with Protestant liberalism, it is true now with so-called postmodernism’s infection in the church—which is just liberalism all over again.

It seems every generation needs to have their own battle for the Bible against enemies outside as well as inside the church. The doctrine of the inspiration of Scripture is one of those basic truths about the Word of God we need to understand and fight for (Jude 3). Second Timothy 3:16 is one of the basic texts where this teaching is found.

What Inspiration Is Not

Sometimes it’s helpful in learning something to learn what it is not first. So let me briefly explain what inspiration is not.

When we say the Scriptures are “inspired” we are not saying this merely because they move us religiously, spiritually, or emotionally. For example, the inspiration of Scripture does not mean the same thing as when we say we felt inspired after reading a poem or hearing a speech. This has sometimes been called the “dynamic view” of inspiration. What these people mean is that the Holy Spirit affected only the writers and not their writings. Therefore inspiration is understood to be a literary or religious inspiration.

When we say the Scriptures are inspired we are not saying that they become the Word of God as we encounter them. This is the neo-orthodox view of Karl Barth and his followers, the Barthians. For example, they say that in the “crisis” of encountering the Word of God, it comes alive and affects us in a certain way. This places inspiration, again, in us, and not in the words themselves. 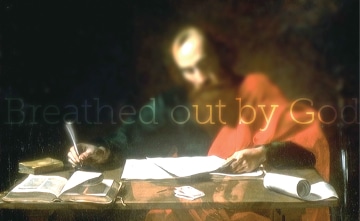 Finally, when we say the Scriptures are inspired we are not saying that they contain the Word of God like corn in a husk. Some say that the Scriptures are inspired in their theological and ethical teaching but cannot be trusted on issues of historicity, archaeology, and chronology. For example, there is a novel view today that says we believe Genesis 1–2 teaches that God created everything. Of course we would agree with this. The problem is that this is all some say the Scriptures teach. They say the rest we leave to science. Therefore, “Adam” was a product of evolutionary process since we all know evolution is fact. But the Scriptures never say to us, “Don’t listen to this part”; instead, it speaks with authority in all its parts and assumes that all its parts come from God.

In contrast, we receive, believe, preach, read, and seek to live in obedience to the Word of God because its words are the very words of God to us. Why do we say this? In the words of the apostle, “All Scripture is breathed out by God” (2 Tim. 3:16). The Scriptures are “of God,” as the King James Version translates the phrase. The word Paul uses is theopneustos, which is literally “breathed out by God.”

The idea that Paul is communicating is that the Scriptures come directly from God. The imagery comes from the Old Testament:

The whole commandment that I command you today you shall be careful to do, that you may live and multiply, and go in and possess the land that the Lord swore to give to your fathers. And you shall remember the whole way that the Lord your God has led you these forty years in the wilderness, that he might humble you, testing you to know what was in your heart, whether you would keep his commandments or not. And he humbled you and let you hunger and fed you with manna, which you did not know, nor did your fathers know, that he might make you know that man does not live by bread alone, but man lives by every word that comes from the mouth of the Lord. (Deut. 8:1–3)

The commandments of God are described as coming forth out of the mouth of the Lord, that is, they are His very words. Psalm 33:6 also says this. The idea is that just as God breathed and the heavens and earth were created, so when God breathed out His word He was engaging in creative activity.

This means that we believe in a verbal inspiration, that is, the very words themselves are given by God. As Jesus says in Matthew 5, even the jots (the Hebrew letter yod) and the tittles (the serif part of a letter), are inspired. In Matthew 22:43–45 and in Galatians 3:16 entire arguments are based on the tense of a verb and the number of a word. This also means that we believe in a plenary inspiration, that is, that the entire words are the very words of God.

I mentioned before that this is why our forefathers called Scripture ipsissima verba Dei, “the very words of God.” And our Protestant forefathers said precisely what the holy catholic church has always said in saying this. For example, one of the earliest Christian apologists, that is, defenders of the faith, was Justin Martyr, who said, “When you hear the utterances of the prophets spoken as it were personally, you must not suppose that they are spoken by the inspired themselves, but by the Divine Word who moves them.”2 One of the great trinitarian theologians of the ancient church, Gregory of Nyssa, said, “All things the Divine Scripture says are utterances of the Holy Spirit.”3 Finally, in his Confessions, Augustine wrote like he was having a dialogue with God, in which God says to him, “O man, to be sure I say what My Scripture says.”4

Where Paul Learned It

We receive, believe, preach, read, and seek to live in obedience to the Word of God because its words are the very words of God to us. This is what Paul says in 2 Timothy 3:16. Let me further explain where Paul learned it.

Third, Paul learned this from his fellow countrymen, as a trained rabbi. This is why both Romans 3:2 and Acts 7:38 describe the Jews as keepers of the “oracles of God.”

Fourth, Paul learned this from the Old Testament itself. The prophets’ own witness is key here. They were conscious of bringing the word of the Lord: “Thus says the Lord” is used hundreds of times (e.g., Jer. 36:27).

First, if we lose the doctrine of inspiration preaching is undermined. If Scripture is not breathed out as we have seen it, then a preacher becomes something other than a proclaimer and herald of the words of God. He becomes an entertainer, a stand-up comic, or a therapist. He proclaims his own words, not the words of God.

Second, if we lose the doctrine of inspiration teaching is undermined. If Scripture is not breathed out as we have seen it, then what are we to teach our children around the dinner table? Why get together for a women’s Bible study if the Bible is not the Word of God in everything it says? In the end, we will be led to ask Pilate’s sad question, “What is truth?”

Third, if we lose the doctrine of inspiration faith is weakened. If Scripture is not breathed out as we have seen it, then there is nothing sure to cling to by faith in the struggles and temptations of life. How can I know God’s comfort if I don’t know if He’s spoken and what He’s spoken?

Fourth, if we lose the doctrine of inspiration Bible reading is discouraged. If Scripture is not breathed out as we have seen it, then why read it? Put your Bible reading plans away. Stop waking up early to read it. Why waste your breath in reading it to your children? It is no different than Aesop’s Fables.

Fifth, if we lose the doctrine of inspiration Christ is hidden from view. If Scripture is not breathed out as we have seen it, then Jesus is not publicly placarded before His people, He is not the sum and substance of the various books, and He becomes a mere example to follow.

But we receive, believe, preach, read, and seek to live in obedience to the Word of God because its words are the very words of God to us.

Rev. Daniel Hyde is the pastor of the Oceanside United Reformed Church in Carlsbad/Oceanside, CA.