The following is a Biblical review of Scripture related to the moral issues of homosexuality: Prepared by Samuel A. Cravotta President, West Virginia A.F.A. Foundation, 3008 Glen Drive, Martinsburg, WV 254201. 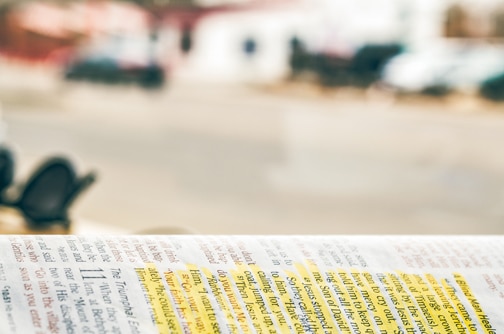 23 And Adam said, This [is] now bone of my bones, and flesh of my flesh: she shall be called Woman, because she was taken out of Man. 24 Therefore shall a man leave his father and his mother, and shall cleave unto his wife: and they shall be one flesh. 25 And they were both naked, the man and his wife, and were not ashamed.

4 But before they lay down, the men of the city, even the men of Sodom, compassed the house round, both old and young, all the people from every quarter: 5 And they called unto Lot, and said unto him, Where are the men which came in to thee this night? bring them out unto us, that we may know them.

22 Thou shalt not lie with mankind, as with womankind: it is abomination. 24 Definitely not ye yourselves in any of these things: for in all these the nations are defiled which I cast out before you: 25 And the land is defiled: therefore I do visit the iniquity thereof upon it, and the land itself vomiteth out her inhabitants.

If a man also lie with mankind, as he lieth with a woman both of them have committed an abomination: they shall surely be put to death; their blood [shall be] upon them.

The woman shall not wear that which pertaineth unto a man, neither shall a man put on a woman’s garment: for all that do so are abomination unto the LORD thy God. (Transvestites)

He that … hath his privy member cut off, shall not enter into the congregation of the LORD. (Transsexuals)

There shall be no whore of the daughters of Israel, nor a *sodomite of the sons of Israel.

7 And he (King Josiah) brake down the houses of the sodomites (*male cult prostitutes), that were by the house of the Lord, 8 And he brought all the priests out of the cities of Judah and defiled the high places (temples of cult prostitution) where the priests had burned incense…

19 And Josiah removed all the houses also of the high places that (were] in the cities of Samaria, which the kings of Israel had made to provoke the LORD to anger, and he did to them just as he had done in Bethel. (He totally destroyed them.)

The show of their countenance doth witness against them; and they declare their *sin as Sodom, they hide (it] not. Woe unto their souls for they have rewarded evil unto themselves.

21 For from within, out of the heart of men, proceed evil thoughts, adulteries, fornications, murders, 22 Thefts, covetousness, wickedness, deceit, *lasciviousness, an evil eye, blasphemy, pride, foolishness: 23 All these evil things come from within, and defile the man.

26 For this cause God gave them up unto vile affections: for even their women did change the natural use into that which is against nature: 27 And likewise also the men leaving the natural use of the woman burned in their lust one toward another; men with men working that which is unseemly, and receiving in themselves that recompense of their error which was meet. 31 Without understanding, covenant breakers, without natural affection, implacable, unmerciful: 32 Who knowing the judgment of God, that they which commit such things are worthy of death, not only do the same, but have pleasure in them that do them.

18 Having the understanding darkened, being alienated from the life of God through the Ignorance that IS In them because of the blindness of their heart: 19 Who being past feeling have given themselves over unto lasciviousness, to work all uncleanness with greediness.

5 Mortify therefore your members which are upon.the earth; fornication, uncleanness, inordinate affect on, evil *concupiscence, and covetousness, which is idolatry: . . , 6 For which things’ sake, the wrath of God cometh on the children of dIsobedience:

9 Knowing this, that the law is not made for a righteous man, but for the lawless and disobedient, for the ungodly and for sinners, for unholy and profane, for murderers of fathers and murderers of mothers, for man-slayers, 10 For whoremongers, for them that defile themselves with mankind, for men-stealers, for liars, for perjured persons and if there be any other thing that is contrary to sound doctrine;

1 This know also, that in the last days perilous times shall come. 2 For men shall be lovers of their own selves, covetous, boasters, proud, blasphemers, disobedient to parents, unthankful, unholy, Without natural affection, truce-breakers, false accusers, incontinent, fierce, despisers of those that are good, 4 Traitors, heady, high-minded, lovers of pleasures more than lovers of God; Having a form of godliness, but denying the power thereof: from such turn away.

Therefore, get rid of all moral filth and the evil that is so prevalent…

7 Even as Sodom and Gomorrah, and the cities about them in like manner, giving themselves over to fornication, and going after strange flesh, are set forth for an example, suffering the vengeance of eternal fire. Likewise also these filthy dreamers defile the flesh, despise dominion, and speak evil of dignities.