Judges 3:12–30 presents the story of Ehud, possibly one of the most troubling passages for commentators and pastors. Philip P. Elliot, in his exposition on the book of Judges, says this: “By even the most elementary standard of ethics, [Ehud’s] deception and murder of Eglon stand condemned. Passages like this, when encountered by the untutored reader of the Scriptures, cause consternation and questioning.” This passage is rather R-rated, full of graphic violence, blood, and guts, with a little bathroom humor thrown in besides. What is this doing in the Bible of all places?

If we focus on that, however, we miss the point of the passage. God can use the most unlifely of means to save His people. Dr. Dale Ralph Davis says that this passage is like God “trying to boom into your ears with all sorts of exclamation marks, ‘See how I delight to save you in all of your troubles!’” In all of your troubles, no matter what they are, or why you are in them, God delights to save you. He hears your cries and is compassionate.

Face it, this story is tremendously entertaining. The telling of this account in the oral tradition must have delighted Israelite children as much as listening to grandpa tell war stories fascinates young children of today. Just because we are Christians does not mean that we have to be dull and boring people. Perhaps there are some who would object to this gross little story; who think that these sorts of things should not “sully the pages of Scripture.” But that is precisely why they are here. Our lives can be pretty wild sometimes. They are not always the calm, predictable, and happy days that we wish they were. Our lives can be pretty haywire, a lot like the “rampaging days of the judges,” as David calls them. He goes on to point out that “Our God is not a God who stands off by Himself in the chaos of our times.” He is actively involved, even when our lives are not pretty.

Verses 12–14 set the stage. Because the Israelites continued in their sinful ways, the LORD sent Moab against them to enslave them. Moab was a country east of Israel. They invaded Israel, first capturing the “city of Palms” (verse 13).

The “City of Palms” was a name for the city of Jericho. Moab was coming from the east and taking over the Promised Land, starting with Jericho. Does that sound familiar? That was where Israel began under Joshua! They were supposed to take over the land, but they failed to remove the inhabitants of the land. For that failure, they were being oppressed. They had failed to drive the people out; that led to those people and their gods being a constant temptation for Israel. For eighteen years, the Israelites toiled in slavery under Moab. Although the nation ofIsrael was the chosen people of God, His covenant nation, they renounced Him and kept repeating this cycle of sin and punishment.

In verse 15, the Israelites come to their senses and cry out to the LORD for deliverance (it took them longer to figure that out here. In the story of Othniel, it took only eight years of toil for them to cry out to the LORD; here it took eighteen). So the LORD raised up a judge, Ehud. We are told that Ehud was left-handed, a Benjamite, and, most importantly, a deliverer. According to the paradigm of Judges 2:11–23, what should one expect now that the Lord raised up a deliverer? We would expect him to blow a trumpet, collect the people, and go offto war like Othniel. In the story of Ehud, however, the reader has to wait quite a bit for that climactic battle to happen. We are starting to break away from the paradigm given earlier with Othniel, starting to see variety in the pattern.

Notice that straightaway, the author says, “The Lord raised up Ehud.” This shows that God was in complete control of all that transpired.

Is it really that important that Ehud was left-handed? Was he lefthanded in our modern sense of favoring his left over his right or was he disabled on his right side (both are possible interpretations)? Interestingly enough, there was a genetic characteristic among Benjaminites to left-handed. This rather ironic since “Benjamin” means “son of my right hand.” We can not be sure, but it is not a stray fact. It will become important and relevant in electric chair or hangman’s noose? That would seem more than just a little morbid, to say the least. Yet that is what we do with the cross. To think of the crucifixion should make us wince in horror. Read Psalm 22 or Isaiah 53. Christ went through a lot for our salvation. And that is putting it lightly! He suffered the unspeakable horrors of hell for our sake. His precious body was mangled beyond recognition for our sake. Deliverance is not cheap, and it is not pretty. And that is why we celebrate the death-device cross, strange as it seems. Through it, we received our deliverance. And that is why the Holy Spirit includes violence in the Scriptures, to remind us that our salvation is not cheap.

After Ehud had made his escape, the servants returned. Noticing the aroma and the locked door, they assumed that Eglon was going to the bathroom. After waiting for quite a while, they went in and found his royal fatness dead on the floor. Meanwhile, Ehud had left the city, fleeing to Seirah. There, he gathered the people of Israel and led them into battle, “for the LORD has given your enemies, the Moabites, into your hands” (verse 28). Taking advantage of the Moabites’ lack of a king, they attacked the Moabites and killed about ten thousand of them. Once more, the land had peace-this time for eighty years.

After Ehud, the people once again did what was right in their own eyes and Shamgar appeared on the scene. Shamgar is even more peculiar than Ehud. He is quietly slipped in between Ehud and Deborah. He is rather obscure-no one celebrates the festival of St. Shamgar or carries a Shamgar ox goad in his pocket for good luck. Scripture gives us only one verse about him, but he is a strange character. All we know about him is his name and his father’s name Anath. Neither of those names is Hebrew. He is referenced again in Deborah’s song in Judges 5, in the same verse as Jael, another Gentile whom God used to save Israel.

It is safe to assume that Shamgar was not an Israelite. Throughout the Old Testament, we get foreshadowings of the time when the covenant will be broadened through Christ to include Gentiles. Rahab, Ruth, and now Shamgar are all Gentiles, just like most of us, who came to be included in the covenant by the grace of God. God can use anyone to save His people-an “untrustworthy left-hander” or a Gentile. Shamgar killed six hundred Philistines with an ox goad! It was an interesting choice of weapons. An ox goad was the tool used to whip stubborn donkeys into shape, an instrument of learning. Here we have the most unlikely of heroes, a Gentile, using a most unlikely tool, an ox goad; and he saved Israel.

How can these dramatic (and violent) tales from the annals of Israel’s history be relevant to us today? Is it a convenient lesson against obesity (“layoff the HoHos, Johnny, or you’ll end up like old king Eglon, and you know what happened to him!”)? Does it teach us not to discriminate against left-handers and outsiders because God can use them, too? Or conversely, never to trust left-handers, since you never know when they are going to stab you in the belly? These applications are just plain goofy. 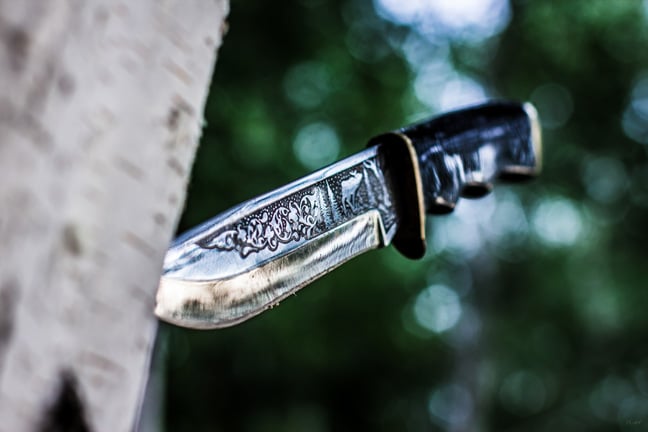 Still, how can such a bloody tale full of blubber and dung be applied to us? We are closely related to Israel, we make the same mistakes and suffer the same consequences. This passage shows us that Israel is progressively decaying, getting worse and worse. Their sins had immediate consequences. Israel was in complete bondage to a terrible nation and just kept living in it until a deliverer was raised up. They could not and did not help themselves. We are too often found worshipping at the shrine of , the popularity cult. We are so tied to what people think of us that if we have a bad hair day we can’t even go to school. We obsess about our grades, making them into gods. We turn to pornography, fantasies, and addictions, making them our gods by trying to find our pleasure in them. We keep falling into these sins, over and over again, doing what is right in our own eyes. But it never works. Just like Israel, we keep struggling with the same things over and over. We struggle with our besetting sins, and it seems that we never get any better.

So what is the answer for Israel’s bondage and for ours? Should we just get our act together, elect a leader, and fight for ourselves? No—look at verse IS—we must to cry out to the LORD for deliverance. These are themes that arise continuously in the book ofJudges. So what should we cry out for? Should we pray and ask that God will send us a better pastor or youth group leader who will lead us out of our bondage? No. That is not lasting deliverance. We need to look to the ultimate Judge, Jesus Christ.

Like Ehud, Jesus boldly went into the domain of His enemy, took the risk of His own life, and defeated His enemy. Unlike Ehud, Jesus did not deceive, sneak, or doublespeak; it was a straightforward victory that cost Him His life. Ehud’s victory was great. It lasted for eighty years (one of the longest in the book of Judges), but Jesus’ victory is final. Ehud was unable to do anything about sin. Israel would continue fall back into sin again and again in a vicious cycle. If you peak ahead to the next chapter, you will see that Judges 4:1 says “after Ehud died, the children of Israel again did what was evil in the sight of the LORD.” But Jesus can completely deliver you from your sin (although He may not deliver you from the consequences). He is the transformer of our lives, the changer of our attitudes. And ultimately, we will be delivered in heaven.

Mr. James Oord is a Christian Thought major and a Junior at Grove City College in Grove City, Pennsylvania.

1. Is it significant that the Moabites first conquered Jericho?

2. How is thrusting the sword into Eglon related to what Israel should have been doing in Canaan?

5. Which is more important—the instrument God uses or the fact that God is using the instrument? List other unlikely instruments that God has used throughout Scripture.