As the fall season approaches, we are challenged to renewed efforts in regard to personal and group Bible study. We are daily confronted with the need for such renewed effort. The society in which we live is an increasingly secular one.

Gallup studies have revealed that 58% of Americans believe religion’s impact on American life is decreasing. That’s why so many Americans could take the attitude they did in regard to the moral lapses in the life of a recent former president. They reasoned that what a man does in his private life has nothing to do with his performance as a public official. Even among those who call themselves born-again Christians there is often an abysmal lack of understanding of Biblical truths.

Forty-six percent of all Americans call themselves born-again Christians. These are people who believe that the Bible is the actual Word of God and who claim to have experienced personal conviction. Although such a large percentage of Americans call themselves born-again Christians, three fourths of Americans think more than one religion offers a true path to God. Just one in six (sixteen percent) think their religion is the best path to God. The author reporting these statistics concludes, “These statistics indicate a large number of Christians are confused about major doctrinal issues.”

It was recently reported in our area that one hundred twenty members of a local church of Reformed persuasion left their church to become members of a megachurch of non-undenominational status. A seasoned pastor and former seminary professor stated that such things happen because many people no longer have any grounding in the Reformed faith.

These and similar situations confront us with the need for added Bible study such as awaits us in the season just ahead.

Bible study requires determination. When Joshua, the man of God was preparing to assume his responsibilities as the leader of God’s people, the Lord appeared to him and said, “This Book of the Law shall not depart from your mouth, but you shall meditate on it day and night, that you may observe to do according to all that is written in it. 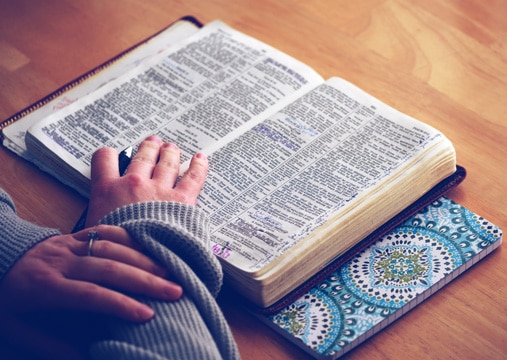 For then you will make your way prosperous and then you will have good success” (Joshua 1:8). Although God appeared to Joshua and spoke directly to him, Joshua is instructed to turn to the Word of God, to study it, to absorb it and to live according to it. That requires effort, life-long effort.

During the years of my ministry it has been an encouragement to me to observe men and women who have passed the three score and ten mark and even the fourscore mark who still faithfully attend Bible Studies. They recognize their need to grow in their knowledge of God’s Word.

As effort is required so also time is demanded. It takes time to have regular personal devotions. Whether that be at the beginning of the day, at midday, or at the close of the day, there has to be a concerted effort to devote a certain time of the day to the reading and meditating upon God’s Word. Many Christians report the regular practice of getting up in sufficient time in the morning before leaving for the day’s work so that there is time to spend with God’s Word. Such people are also likely to set aside time for group Bible study. And they, of course, are richer spiritually because of their effort.

I would like to suggest the importance of the use of books in our Bible study. There was a time when it was common to find a book case in the living rooms of most of the homes of our people. The book case usually contained a Bible Commentary, some books on theology and perhaps a devotional book or two.

I am grateful that in my own library I have commentaries, a Bible encyclopedia and sets of Edersheim and Josephus which belonged to my father whom I was never privileged to know. As I use these books and read the notes in the margins, I am reminded that my father was a student of the Word. I am grateful that my son has indicated a desire to someday own these books.

Well-used books should be a part of the heritage which we pass on to our children that they may know the importance of Bible study in our lives and may hopefully follow in our footsteps. As I lead Men’s Bible study from year to year and see father-son pairs in attendance, I think what a satisfaction it must be for those fathers to see their sons joining them in Bible study. Many a faithful member of Men’s Society has born testimony to the influence of their fathers, whose example of faithfully attending Men’s Society week after week they remember well.

So I take advantage of the opportunity to encourage especially men to develop the discipline of attending a Men’s Bible Study. In most of our churches the women’s Bible study groups continue to prosper. Unfortunately, in a number of churches the Men’s Society or Men’s Bible Study group had disbanded and where they continue the attendance is often sparse. Such ought not to be! Men ought to set the example in the church for interest in the study of God’s Word.

The importance of this is seen in the benefits which are derived from it. The apostle Paul, in writing to his spiritual son, Timothy, declares, “All Scripture is given by inspiration of God, and is profitable for doctrine, for reproof, for correction, for instruction in righteousness, that the man of God may be complete, thoroughly equipped for every good work” (II Timothy 3:16,17).

Bible study will increase our fellowship with God. The Psalmist declares, “How sweet are Your words to my taste, sweeter than honey to my mouth!” and “Your word is a lamp to my feet and a light to my path” (Psalm 119:103,105). As we study the Word we come to know the Giver of the Word better. It is through a study of the Word that we come to know the will of God for our lives better and may be more and more conformed by His Spirit to the image of His Son.

In a recent essay, Dr. John Bolt wrote, “There are secularists today who in the name of tolerance truly believe that any explicitly religious witness in the public square is an act of intolerance. Thus, public affirmation of Christian sexual morality is judged to be homophobic hate speech that must be silenced. Remarkably this posture is taken in the name of tolerance! Intolerance of Christianity is thus judged to be an act of tolerance. Examples of such politically correct intolerance abound today.” Such intolerance, I believe, points to the fact that the Christian witness is going to become increasingly difficult to bear and will expose us to various forms of persecution. Therefore, the Christian must be strengthened in the faith and become increasingly adept in the use of “the sword of the Spirit.” One of the best means to accomplish this is Bible study.

Those who are faithful in Bible study will be better equipped to serve in the Kingdom of God and to fulfill their responsibilities as faithful members of the Church of our Lord Jesus Christ.

Blessed are those children who over the years have shared with me their memories of coming downstairs to breakfast and finding their father at the kitchen table with his Bible open before him in study or sitting in his favorite chair with his Bible in his lap as he meditated upon the Word of God. Such children have an example which cannot be purchased with money nor will it be quickly forgotten.

Finally, I would remind you of the need to prepare ourselves to be better witnesses to the world in which we live. It was significant that following the terrorist attack on 9/11 both the Tonight Show and the Late Night Show were silenced. They had nothing to say in the light of the great tragedy that had taken place. Church attendance in the weeks immediately following 9/11 increased dramatically and then soon fell off again. The sale of Bibles in the week following the terrorists attack increased 80%. People were searching for answers.

They were looking for peace and security at a time of great insecurity. You and I know the peace for which millions are seeking. We must increasingly “be ready to give a defense to everyone who asks you a reason for the hope that is in you” (I Peter 3:15). As this new season begins, let us with renewed zeal and dedication turn to a study of God’s Word to better equip ourselves “to redeem the times for the days are evil” (Ephesians 5:16.)

Rev. Arthur Besteman lives in Caledonia, Michigan. He is a member of the Bethany United Reformed Church of Wyoming, Michigan.