The life of Abraham must have changed completely when Ishmael was born. Suddenly it became Abraham and Ishmael; Ishmael and Abraham; father and son; son and father. I am sure that on many afternoons Abraham could be heard saying, “Let the servants do the work; I’m going to spend time with my son. Sometimes the emphasis would be on the “my” and other times on the “son.” Abraham was truly happy in the birth of Isaac, but the love he had for Ishmael did not diminish in any way just because Sarah had given birth. Ishmael was still Abraham’s son. Any parent who has more than one child knows that there is love enough for all of them. While Isaac was being weaned, Abraham still spent his hours with Ishmael. After all, you cannot do a lot of hunting or fishing with an infant.

Another Kind of Laughter

It should not be hard for us to understand why Ishmael would make fun of his half-brother. Ishmael was the heir-apparent until that other child was born. For thirteen years he had been the only child. He had Abraham all to himself. His father had taught him how to hunt, fish, and a host of other things. Even when God promised Abraham that a son would be born to him and Sarah, Abraham’s first thought was of Ishmael (Genesis 17:18). Once Isaac was born, that all changed. Father Abraham still took his older son with him to the fields, but it was different. Ishmael had always been a sore spot between Abraham and Sarah. At the great feast Abraham threw for his younger son, the faults of mother Hagar, who had earlier despised Sarah (Genesis 16:4), became intensified in her son Ishmael. Galatians 4:29 indicates that the mocking referred to in Genesis 21 amounted to persecution of the boy born by the power of the Spirit. Through his ridicule of the child of the promise, Ishmael declared himself to be outside of that promise.

The relationship between the two mothers was already strained. At first, Hagar had the upper hand. When Isaac was born, not only did Sarah’s laughter return, but her dislike for her handmaiden must have increased. While Isaac may have been the promised child, Sarah must have noticed how Abraham loved the teenage boy. He was, after all, his firstborn and thereby rightful heir to all that belonged to Abraham. She may well have wondered how young Isaac would defend himself against the older Ishmael after the aged parents were gone. When she saw Ishmael picking on her son, she could bear it no more and confronted her husband insisting that the slave woman and her child be sent away.

One can only speculate why God would want Hagar and Ishmael out of Abraham’s life. Obviously the friction between the two boys would only increase as they grew older. Perhaps separation at this stage in their lives would be easier than parting in the future. It is possible that Abraham maintained some personal satisfaction in the fact that he was able to father Ishmael and was not wholly appreciative of the grace of God in the conception and birth of Isaac. It could also have been for the sake of Isaac. Rather than growing up a second son like Abel (whose name meant “vanity” or “meaningless”), Isaac had to grow up knowing that he was the child of the promise, rightful heir to all God had promised his father.

Nevertheless, the separation had to take place in order to properly prepare Abraham for his next test in faith—the offering up of Isaac. Had Ishmael still lived at home through the events of Genesis 22, Abraham could always have reasoned, “Well, I still have Ishmael,” thereby lessening the severity of the test of faith. “Accidents happen and there’s always Ishmael.” But Isaac was the child of the promise, the one through whom the Savior must come. In this domestic dispute, God was on Sarah’s side. By sending the slave woman and her son away, God shut out any possibility for Abraham to place his hope or trust in Ishmael.

Having ridiculed the true heir, and thereby rejecting God’s purpose for Isaac, the natural heir was sent off into the desert with only as much food and water as his mother could carry on her shoulders. Soon the canteen became as dry as the sand that clung to their feet. As they moved on, they realized they were lost. With her water supply gone and her strength failing, Hagar’s hope ran dry. She placed her son in what little shade the desert offered, moved away, and began to cry. Utterly spent, she sat on the hot sand waiting not for help to come, but waiting for death to come to her and to her son. 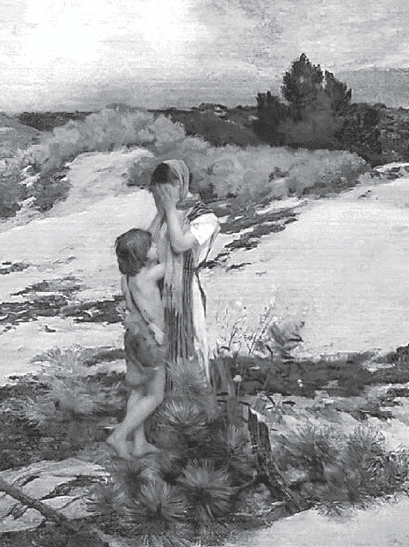 To this woman, lost, hopeless, and dying, God spoke. And He asked a startling question, “What is the matter, Hagar?” Not only does it appear to be a callous question, but it seems an odd question for an all-knowing, sovereign God to ask. She was lost. She was out of water. Her son was dying. She was dying. The answer to the question was obvious!

The answer, however, is not as obvious as it may appear. The angel of the Lord did not come to Hagar because she was lost or because she was crying. Verse 17 points out very clearly that the reason God came to Hagar was because the boy was crying, not Hagar. The question is not so much addressed to the circumstances that Hagar found herself in, but to her lack of faith. Had not the all knowing, omniscient, sovereign God told her the last time she was lost in the desert that her descendants would be too numerous to count (Genesis 16:10)? Had she not named her son Ishmael (God hears) because of the promises He had given? It is precisely because God is sovereign that she needed to be asked this question. The hope Hagar had lost was not only in the lack of water but especially in the promises of God. She needed to trust in the promises Abraham’s God had given to her and to the patriarch. He would not permit her son to die in the desert because He had promised Abraham that Ishmael would become a great nation.

Years later in the city of Galatia, a group of people tried to persuade newly-converted Christians that they needed to have faith in Jesus, but, in order to be saved, they also had to do certain good works. Paul referred them back to the two offspring of the father of faith.

When the promise of God seemed short in coming, Abraham and Sarah tried to take things into their own hands. They went to the slave woman and had a son through her. She represents Abraham trying to fulfill the promise of God by means of his own works. God sent that woman away. She represents the old covenant, Paul wrote. As long as a person tries to be saved by his own works, he must keep the law perfectly and becomes a slave to the law of God. Those who attempt salvation by works find themselves lost in the desert without water and without hope. Lost in the wilderness, Hagar could no longer rely on the water Abraham had supplied. Clinging to Abraham’s empty canteen, she could not see the abundant provision God had supplied. She had to rest in the provision given by God. So also, we cannot rest in provisions derived from man or good works; we must rest solely in that which God Himself has provided—the sacrifice of His Son.

Ishmael was born of human effort. He represents those who believe they can serve God in their own way and by their own efforts. Thinking themselves to be good enough to earn their own salvation, they despise the one true way that God has provided through His Son, Jesus Christ.

Isaac, the miracle son, came into the world through the power of the sovereign God. He was a child of grace born of the free woman, Sarah, when she was barren and Abraham as good as dead (Hebrews 11:11, 12). According to Paul, Isaac represents the person who acknowledges himself dead in sin and trespasses, unable to do any good thing, but saved by the grace of God.

Many people will claim Abraham as their spiritual father. What must be considered, however, is from which offspring. Are you relying on your works to save you? When asked how they will get to heaven, a majority of people—even people who call themselves

Christians—will tell you it is because they live a good life. Paul emphatically states that if you base any portion of your salvation on your works, then you are still a slave. If, however, you depend completely on the sacrifice made by the New Testament miracle child, Jesus Christ, then you are a child of the free woman and you are no longer a slave, but free.

While Hagar had run out of water, Abraham had a dispute concerning water as well. The same king he had once deceived could not help but notice how Abraham’s God was blessing the patriarch. He came hoping to strike a peace treaty with Abraham. Abimelech’s request may well indicate his fear of Abraham’s increased wealth and the patriarch’s potential to supplant his dynasty and kingdom. While discussing the terms of the treaty, Abraham points out that one of Abimelech’s servants has seized a well dug by Abraham’s servants. Abimelech suggested that he had never heard that it was Abraham’s well. Considering the king’s history with Abraham, there would have been very little reason for him to believe Abraham was telling the truth. Even so, agreements were made and Abraham stayed in the land of the Philistines for a long time.

What this passage suggests is that Abraham was moving away from being a nomad, wandering from place to place, and was beginning to put down roots. The digging of wells, the planting of a tree, and calling on the name of the Lord all indicate that Abraham was settling down to establish his family and to develop more deeply his relationship with God.

1.    What are some of the differences and similarities between this departure of Hagar and the one in Genesis 16?

3.    How is the promise to Ishmael different than the one given to Isaac?

4.     How was Hager’s experience in the desert similar to the one Abraham was about to face in Genesis 22?

5.     What reassuring message did Hagar receive from heaven?

6.     How does Paul use the banishment of Ishmael and Hagar to bring the gospel to the Galatian church?

7.     Explain the difference between the descendants of Ishmael and those of Isaac.

8.     What transition takes place in Abraham’s life at the end of the chapter?

9.     How does this chapter set up the next chapter where Abraham will be told to sacrifice his son?