The week before my anticipated visit to the large state prison outside of Avon Park, I mentioned to my Bible study group that I would be going to the prison to lecture on Esther. Many in the group were curious: “How did that come about? How did you get invited to give a two-hour lecture to inmates on the subject of Esther?”

To answer that question required some backpedaling. It didn’t just happen! Way back in January, I received an e-mail from Myron Rau, the president of Reformed Fellowship. He informed me that he was corresponding with an inmate at the Avon Park facility. This man was receiving The Outlook magazine and was following my Bible lessons on Esther. He wanted to know more, so Mr. Rau asked if I would try to schedule a visit with him. Having been involved with Crossroads Ministry for more than thirty years, I quickly promised to make the effort. Getting into prison is a quick and easy entry if you commit a crime. It is also rather easy if you simply want to visit someone on the inside. But, getting in to teach a class on Esther is rather frustrating. Florida regulations are copious and time-consuming. I first had to meet the chaplain, who happened to be a hard-nosed Texan.

When I was finally able to meet him face to face, he put on a friendly front and read me all the steps that I would have to go through before getting approval from the state. The first hurdle was a “four- hour training session” to be held on Saturday, February 2. That was tedious, but, thankfully, only lasted two-and one-half hours. There were approximately eighty persons at the event, all wanting to do some kind of mission work in the prison. I was told that my approval would come through when Tallahassee checked me out but was assured that could take weeks.

On Friday morning, February 15, my phone rang. It was Chaplain Vince from the prison. He was rather animated and very friendly. He had read through Esther, which I had given him in January. He loved it. He wanted to have me come into the prison on Sunday, March 3, from 1:30 to 3:30 p.m. and give a lecture to the inmates. He promised to advertise it in all the wards and wanted inmates to sign up for the lecture. He expected that there would be at least thirty and maybe as many as fifty. Myron’s contact was already drumming up support and encouraging his contacts to sign up. My brain went into rotation and sliced into my sleep time! What do I emphasize? How should I organize my materials? Knowing that no electronic gadgets were permitted, it would all be spread out on a white board with a nice little black marker. No PowerPoints® permitted. No computers, smart phones, or electronics. Just face-to-face lecturing, for two solid hours, on Sunday afternoon. That meant missing the all-important nap, essential for octogenarians. 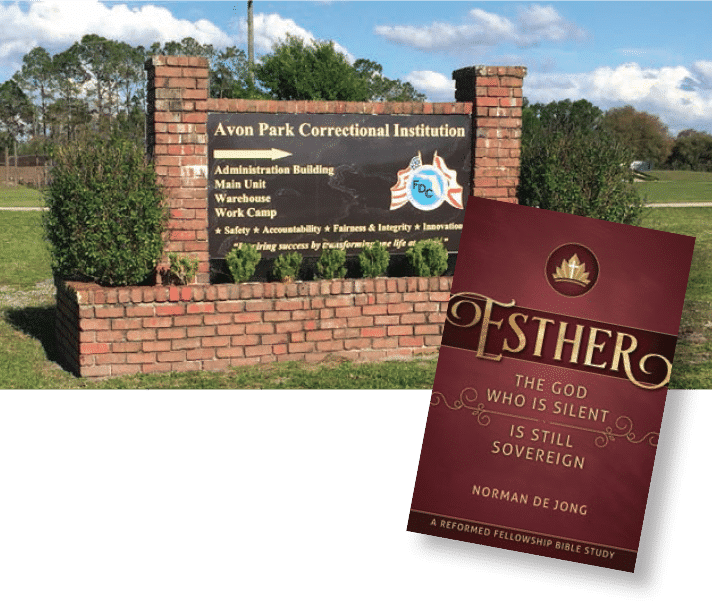 Those two weeks seemed to drag by. Each night I would draft and revise my lecture materials, anxious to convey the most important truths to a bunch of felons, all in prison for some type of crime. Sunday, March 3, finally arrived. I was told to be at the gate promptly at 1:00 p.m., which I did. After getting directions to the main building, I presented my credentials to a woman behind a steel wall with a small opening. I informed her and three other officers that I was scheduled to make a two-hour presentation on Esther in the chapel. They told me to wait while they did a “background check.” I waited outside in the hot sun. No place to sit. I waited some more. Twice over someone inside barked about more background checks. At 1:45 one of the officers brought out a metal chair and offered me a spot in the shade. I waited some more! Finally, at 2:20 p.m. a female officer invited me inside for a metal screening, which failed the first time. My belt had a metal clip to it. At that point this officer, now quite pleasant, asked me why I was so late in arriving. I politely informed her that I had not been late. She offered me a feeble apology and told me to wait outside in an enclosed area: “Someone will come and get you and take you to the chapel.” After a few minutes, a heavy-set officer appeared from a distant office, trudging slower that a sick turtle. The chapel was locked. He had a key.

About the same time a group of men began forming along the other side of the road. At first there were only a dozen, but more kept appearing from other buildings. The white board that was promised turned out to be very green, but the chalk was white. One of the men quickly came forward and asked me why I had been delayed. He told me that the warden had sent out an earlier announcement that the meeting in the chapel had been cancelled, since the speaker had not shown up. The men, therefore, had gone back to their units.

At 2:20 the warden had come back on the PA and announced my arrival. Whoever was interested should head for the chapel. Ten minutes later we were finally ready to start. Approximately twenty men had gathered to hear about Esther. I inquired about time allotments. The guard said that we could stay until 3:55 but had to be out before 4:00.

I twisted and scrambled my lecture notes and jumped in. The men were very attentive. They kept their eyes riveted on me and peppered me with some beautiful, profound questions. They knew their Bibles! They had read all of Esther and formed their own opinions. One in particular thought I was being too hard on the beautiful queen. He was perceptive, persistent, and polite. I love such students. They want the truth and are willing to dig deeply for it. Near the end I gave them opportunity to ask their questions. Often I was struck by their faith, their love for God’s Word, and their desire to learn more.

After surviving the frustrations of bureaucratic malfeasance, I enjoyed every minute of my visit with these inmates. They are godly people who have made some tragic mistakes. They are paying a price. But, because of their love for God’s Word, they are experiencing profound peace. They want to grow in their faith. They want the warden to offer more learning opportunities. They are children of their heavenly Father.

Before parting, I offered one copy of  The Outlook for the library and told them about getting their own subscription. I also put one copy of Esther in their library. It may soon get devoured. I also offered a prayer, thanking God for what he is doing in the Avon Park Correctional Facility. He loves those men!

Dr. Norman De Jong is a semi-retired minister in the Orthodox Presbyterian Church.