There was once a young boy who lived near a lake, and the boy loved to fish. He would sit for hours with his cane pole and a can of worms. He often caught quite a few fish—perch and sunfish—and almost all the fish were small. He would take the fish home for his family to eat. Because the boy was young, his father usually had to clean what his son caught.

After a while, the father got tired of cleaning the little fish. So he cut a stick to a certain length and said to the boy: “From now on, son, don’t keep any fish shorter than this stick. Small fish are a lot of trouble to clean and they don’t have much meat. From now on, catch only big ones.”

The boy stared at the stick and his heart sank. He knew that most of the fish he brought home were shorter than the stick. That night his father helped him tie a larger hook to his line, a hook too large for small fish to get caught on. The young fisherman enjoyed catching fish whether big or small, but from now on the small ones weren’t “keepers.” 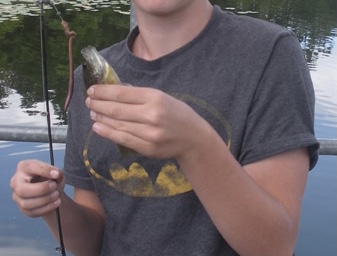 On at least one occasion, the disciples of Jesus treated young children as too small and insignificant to merit Jesus’ attention. The gospel writers, Matthew, Mark, and Luke give us one of the most beautiful stories in the Bible about Christ’s love for children. It happened at a time of growing tension, when Jesus was on His way to Jerusalem where He would be crucified. For whatever reason, the disciples tried to prevent small children from being brought to Jesus. But Jesus called the children to Him, and said:

Here we see Jesus, who is the perfect revelation of God, showing the heart of God for children. These words and actions of Jesus stamped Christianity as a religion ardently pro-children. Over the years, no other religion has come close to matching Christianity’s concern for the physical and spiritual needs of children.

Children need most of all to be told about God and His Word. They need to be brought to Jesus for His blessing and salvation. Material circumstances vary greatly, but there is not a child in the world that does not need the Lord Jesus. Well did Jesus say, “Let the children come to me.” Yet today, 80 percent of the world’s children and youth are growing up in non-Christian settings where they are not likely to learn about Jesus.

HOW IMPORTANT IS A CHILD?

How did Jesus view children? First. He saw children as imagebearers of God. As the eternal Son of God, Jesus was there when triune God said, “Let us make man (male and female) in our image” (Genesis 1:26). He took part in creating human nature, which in distinction from all other earthly beings, has the capacity to know God, enjoy God’s fellowship, work for Him, and consciously worship Him. For that reason, when Jesus saw people bringing children to Him, it made His heart glad. He took them in His arms and blessed them. This was the way it was meant to be from the beginning.

Jesus also saw how vulnerable children in this fallen world are to abuse, violence, temptations, and wrong ideas. Jesus knew that getting at children and youth has always been Satan’s favorite strategy, and he uses a host of weapons. Satan’s goal is to prevent children from knowing and serving God. If he fails to kill them in the womb, or soon after birth by infanticide, he tries to fill their minds with wrong ideas, torture them emotionally, damage their bodies and brains, sear their consciences, and ultimately—if he can—destroy them completely.

Jesus knew the importance of someone intervening to bring little ones to Him. He saw beyond those particular children being brought to Him that day. He saw the millions and millions of children who across the centuries would be introduced to false religions by their parents. They would never have a chance to hear of God’s saving love unless somebody made a special effort to reach them and tell them about Jesus. As a missionary in southern Asia, nothing broke my heart more than to watch mothers teaching their children to pray to Buddha at the temple near our home. God’s first two commandments state that we should worship Him and Him alone (Exodus 20:34). But the sad fact is that throughout the world, countless children learn from infancy to worship idols, or they are taught that there is no god at all. Is anything more important than reaching out to such children with the gospel?

The famous English preacher. Charles H. Spurgeon, often appealed to children to put their faith in Jesus. In his book entitled, Come, Ye Children, Spurgeon urged adults to teach children the basic truths of the Bible. Reflecting on Jesus’ words concerning children and who the people are that belong to His Kingdom, Spurgeon pointed out that humility, trust and dependence are children’s distinguishing traits. Therefore, he concluded, Christ’s Kingdom is composed of children and childlike persons who humbly trust Jesus to save them and meet their needs.

Children were attracted to Jesus, and He rejoiced when they sang His praises. Matthew tells us that one day when Jesus was teaching and healing in the temple, children started shouting with glee, “Praise to the Son of David!” This made the temple leaders angry, and they said to Jesus: “Do you hear what these children are saying?” To this, Jesus replied: “Have you never read what the Scriptures say:

‘From the lips of children and infants you (God) have ordained praise’?”

Little ones praising and worshiping God is the way it ought to be. But someone must tell them about Him!

EVANGELISM IN A WORLD OF CHILDREN

The aborting of unborn children has become a common way of limiting population growth throughout much of the world. In some countries, China and India particularly, infanticide is widely practiced, especially when the baby is a girl. In many cities, tens of thousands of children orphaned by poverty, war, and AIDS, virtually rule the streets at night, stealing, prostituting, and peddling drugs just to survive.

Wherever the biblical teaching about the intrinsic value of a child as God’s image-bearer is denied or ignored, the lives of children are in danger. It requires a biblical worldview to estimate the true value of children and pay the price of saving them. In a world of three billion children, a hundred million of who are street children, the need for Christians to organize and support shelters, schools, orphanages, feeding programs and adoptive parenting programs cries out to be heard. Call it the “silent cry” of dying children!

In the annuals of child evangelism, the name of Amy Carmichael stands out. Amy Carmichael dedicated her life to rescuing children in India from temple prostitution. In her book, Gold Cord, Amy tells how early in her career she had to make choice. God was using her as a missionary speaker and itinerant evangelist. There was glamour to her work. But when she considered the plight of children, she had to decide which ministry was more important. “Children tie women’s feet,” she realized, and caring for children would force her to change her style of evangelism. But Amy chose the children, and among them she found her greatest potential for growing the Kingdom of God. In the yes of God, no “fish” is too small or insignificant. In a world of three billion children, many of whom are doomed to destruction unless someone rescues them, there needs to be a massive change of attitude toward children. Nothing is dearer to the heart of God than a child, nor is there a ministry more important than bringing a child to Jesus.

Dr. Roger Greenway, Missionary Monthly Associate Editor, has been professor of World Missiology at Calvin Theological Seminary, Grand Rapids, since 1989. Earlier he and his wife, Edna, served as Christian Reformed missionaries to Sri Lanka and Mexico. Dr. Greenway has served as pastor and mission administrator and has written numerous mission books and articles.