Why is it that in some congregations the singing is so strong and powerful, while in others it is so feeble and lifeless? The acoustics of the sanctuary may have something to do with it; the size of the congregation may also play a role. But perhaps a partial explanation lies in the musical accompaniment of the organist.

What are some of the necessary components in developing good congregational singing?

First, the organist must recognize that playing the hymns well depends upon careful attention to the text. Before playing a hymn the organist should study the text of the song and determine a particular tempo and mood which is consistent with it. This should be done in preparation for the service. Frequently, organists are tempted to say what an organist once observed to me, “Oh, the hymns are easy . . . I don’t worry about them.” But this is a serious mistake. As organists we have a responsibility to accompany the congregation in a way that serves the spirit and style of a hymn, enabling the singers to enter more fully into the meaning expressed by the text of the song. Nothing less than this is demanded of an organist who seeks to assist the congregation in the worship of God.

I have found that singing along with the congregation helps in determining whether the tempo is too lively or slow, or whether the congregation is being given a sufficient break between stanzas. With many songs the textual phrases do not precisely coincide with the musical phrases. Even if the voices take a breath at the end of the musical phrase rather than the textual phrase, as long as the organist carries through, the text will be better understood. The organist must determine the tempo and be accurate in the time values. A steady beat should be maintained, since consistency in timing helps the congregation sing with confidence. It is ordinarily inadvisable to slow down (ritard) at the end of any stanzas except the last. The swell box should also be left open to avoid sudden or unwanted changes in volume.

Occasionally, for ease in singing, the hymn may need to be transposed to a lower key. If the organist does not feel confident in doing this extemporaneously, consult other hymnals (they may already have the selection in a different key) or take the time to rewrite it yourself.

The introduction to the hymns should generally be the entire song or at least the first and last phrases. The tempo of the introduction should also be exactly the same as the tempo for the singing. A registration somewhat softer than that chosen for the congregational singing will often be used. 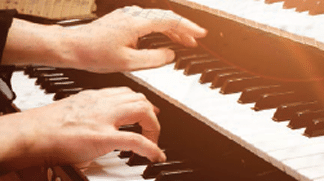 Generally use the bright, clear principal stops—the 8,’ 4,’ and 2’ stops. Mixtures may be added for more powerful hymns or on the last stanza when the words are appropriate. It is wise to avoid a 16’ manual tone with some rare exceptions. The pedal part should also be played in the octave in which it is written, and the bass line should not be doubled with the left hand.

The occasional use of free accompaniments and descants will provide variety and stimulate congregational singing. Some free accompaniment, however, tends to be too unconstrained and remote from the melody and thus hinders rather than promotes congregational singing. This is most effective on well-known hymns and should not be played on more than one or two stanzas. The “Amen” should be played in a positive manner and in the same rhythmic pulse; the volume should not be reduced for the “Amen.”

In addition to playing for the congregational singing, the organist must select appropriate music for the prelude, offertory, and postlude.

In selecting music for the prelude, offertory, or postlude, the organist should be especially attentive to the question as to what is most fitting as an accompaniment to the congregation’s worship of God. In these days when the desire for entertainment and performance has crept into our view of worship, we must be primarily concerned with the contribution which the music will make to a worship which is “in spirit and in truth.” The great issue, therefore, is not, “Will the congregation enjoy this?” but rather, “Is this music worthy of God?” The congregation may well enjoy and appreciate a selection, even admire the beauty of the melody, but this does not necessarily mean that it assists the worship of God. It might just as well mean that the congregation has been distracted from the worship of God! This has significance for the way the prelude, offertory, and postlude should be viewed.

The function of a prelude is to provide a suitable atmosphere for the preparation of heart and mind for worship. Thus, the prelude is not an opportunity for the organist to provide a recital, nor is it simply a time for background music while people file into the church sanctuary.

The offertory should not be a selection designed to draw the attention of the congregation away from the act of worshiping God through the giving of our gifts. Perhaps a selection could be found that deals with the theme of the sermon or that calls attention to some aspect of God’s character or work for which he is to be praised and worshiped.

Similarly, care should be exercised in the selection of a postlude. Frequently this is not the case and postludes are almost an afterthought. Perhaps this is the reason postludes are often simply loud and fast. Though it may be true that the postlude does not add anything directly to the worship of the congregation which it follows, it can easily belie or even nullify what was said and done in the worship service. If the dominant mood, for example, of the service was quiet and reflective, a quiet chorale would be better than a loud toccata. A composition based upon the closing hymn also works well to remind the congregation of the theme of the sermon.

An organist will discover that, once decisions about these selections are based upon their contribution to the worship service, the decisions themselves will be easier to make. An appropriate variety in musical selections will result and individual likes and dislikes will be minimized.

In addition to the selection of preludes, offertories, and postludes, the church organist should be able to demonstrate proficiency in technical skills and flexibility. Organs differ considerably, and the organist is expected to adjust the registration to get the full use of the instrument. Sometimes there is an unexpected circumstance in the worship service—the minister skips a song (it happens!) or a technical problem with the organ occurs—which the organist must be ready to deal with without hesitation. Of course an organist ought to be dependable. Accurate timing of the prelude, for example, is important so that the service begins on time.

The remainder of this article is not devoted to the organist’s accompaniment of the congregational singing or contribution to the worship service by way of preludes, offertories, and postludes. In the following I would like to address the issues of learning new songs and the responsibility for choosing music that is worthy of God in worship.

In all hymnals there are always “favorites” and “unknowns.” In congregations that have recently purchased new hymnals, there will likely be even more new and unfamiliar songs. What are some of the ways in which the congregation can learn these new songs?

Another method would be for the organist to play the song through once or twice while the congregation would read the words and hum along. After a new hymn has been introduced it should be sung again in a week or two. The minister might also suggest that the organist play only the melody.

An older tradition, and one still practiced in some churches, provides for a congregational practice time before the worship service itself. This provides an excellent means for learning new hymns or hymns which are seldom selected. This can also be done at fellowship gatherings or in the context of Bible study societies.

Furthermore, the Christian home and school should be places where psalms and hymns are learned and sung. I find this to be an especially appealing approach. Perhaps a new song could be introduced each week as part of the families’ devotions. By singing from the congregational hymnbook in these settings, parents and children are prepared for public worship. As in the churches, alternative hymnbooks should be discouraged and opportunities seized to learn the songs of the congregation. Sadly, many people have hymnals in their homes that are seldom used. However, the Christian home is the primary place for children to become acquainted with the congregation’s songs of praise. By singing these songs together, not only in public worship but also in home and school, children would also be taught that worship extends beyond the Lord’s Day and throughout the week. They would also be taught—provided that songs coincide with those approved for use in public worship—that all worship of the Lord requires mental alertness and that the choice of music is always important. Though this may be difficult in some homes where no one believes he is able to accompany the singing, in most households there is at least one person who is able to pick out the melody and in many households there may be several who play musical instruments. Children enjoy playing hymns, and these should be included in their repertoire as they are taught to play their instruments.

Music Worthy of God: Who Is Responsible?

It is not only the organist who is responsible for the selection of appropriate music. This is also the responsibility of others in the covenant community—fathers and mothers (as we have just seen), Sunday school teachers, Christian school teachers, Young People’s leaders, and so on. Those who are responsible for selecting appropriate music should remember that children are quite capable of learning good music and should be encouraged to do so.

However, the final responsibility for determining what music is worthy of God in the worship of his name rests with the church’s council. Office bearers in the church are responsible to study the biblical principles for worship and how these relate to the music which plays such an important role in the church’s worship. They should make sure that these principles govern the choices made not only by the minister of the Word but also by the organists in their contribution to the worship of God.

This article was first published in The Outlook, March 1991. The following was the author’s information at that time:

Mrs. Nancy Venema is the wife of Dr. Cornelis P. Venema, professor of doctrinal studies at Mid- America Reformed Seminary. Mrs. Venema has been a church organist for twenty-three years and teaches piano lessons to a number of children. The Venemas have a son and three daughters.