The family has been under severe attack over the last several decades in America. A moral time bomb exploded upon it on June 26, 2015 (America’s Black Friday), when the Supreme Court usurped the traditional definition of marriage that was based on God’s law.6 This morally corrupt decision by individuals (5–4 vote) functions to usurp not only God’s moral law but also the laws of nature. We are only beginning to experience the negative moral, social, and economic ramifications of a decision that will function to deteriorate further the overall moral foundation of America as well as the three basic divinely established institutions, especially the family which serves as the building block of the other two.

Congress shall make no law respecting an establishment of religion, or prohibiting the free exercise thereof . . .

The framers of the Constitution never intended to bar the truth of religion (i.e., particularly Christianity, which is rooted in the Bible) from being reflected in the various sectors of society. It was the farthest thing from their minds. 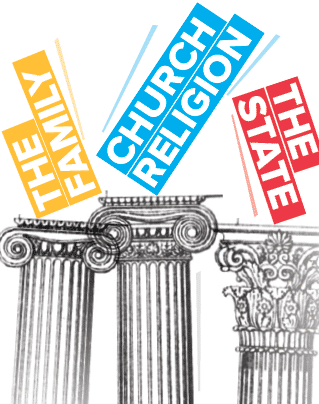 Congress shall make no law respecting an establishment of religion, or prohibiting the free exercise thereof . . .

While the essence of the first half of the first clause of the First Amendment was to keep the government from establishing one system of religion over another, the second was designed to protect the religious practices of each system. It is interesting to note that some of the early colonies were made up primarily of one system of religion or another (e.g., Roman Catholics in Maryland, Quakers in Pennsylvania) and could exist as religious sub-societies under the protection of the Constitution.

They and others throughout the country have enjoyed the free expression of religion in varying forms of religious sub-societies under the First Amendment for years. They have also enjoyed the fundamental liberty of personal choice in relation to the (public) education of their children via the Fourteenth Amendment.8

That is, until a series of Supreme Court landmark decisions over the last fifty years would increasingly rob them of that and other fundamental rights.

The most recent of these landmark decisions occurred in 1980, wherein the court declared that posting the Ten Commandments in a (public) school classroom violated the Constitution. This infamous decision was preceded by two decisions made by the Warren court in the early 1960s. In 1962 the court declared that prayer in school was unconstitutional, and in 1963 it stopped schools from allowing the Bible to be read in the classroom. Justice Potter Stewart (1958–1981), the only dissenter in the (1963) court’s 8–1 ruling, said, “It [the decision] led not to true neutrality with respect to religion, but to the establishment of a religion of secularism.” The system of religion known as secularism9 is now the religion that reigns in our nation’s public school system. This system of religion imposed by the state has weakened the moral character of countless millions of Americans over the last four decades, thus negatively affecting all sectors of our society.

The Ten Commandments, along with principles and concepts of Scripture, serve as the primary basis for our country’s rule of law as well as our three branches of government. They also provide the moral framework for our system of economics and the labor sector. Many of these principles and concepts are also being uprooted or usurped in our country today. We have observed violation upon violation of the moral principles undergirding our Constitution by high-ranking government officials with little or no consequence. These and many other things typify the kinds of concerns related to our society which burdened IRBC’s founding elders’ hearts. We trust they burden your heart as well and you will be active in praying and seeking to be used of the Lord to address and restore America’s moral foundation. Be praying that the Lord will use the training you receive in this series to further equip you to effectively minister the gospel to souls within and outside the walls of the visible church. In the next article we will give our attention to matters which typify some of the concerns our founding elders have for the visible church of our day.

Are you concerned about the deterioration of the three basic institutions in the United States?

1. What is God’s definition of marriage?

2. What are some of problems our nation can expect to encounter in the wake of the 2015 Supreme Court ruling about same-sex marriage?

3. There is a sense in which the state should be secular in relation to the distinction of its role in comparison to the church. What is the primary role of the state? Of the church?

4. Read the following portion of the syllabus of the Supreme Court decision in association with its decision to legitimize homosexual marriage. Point out the errors of thinking in this communication.

3. Deism is a movement or system of thought advocating natural religion, emphasizing morality, and in the eighteenth century denying the interference of the Creator with the laws of the universe (Merriam-Webster Dictionary).

5. The Three Forms of Unity can be accessed free of charge online at https://www.urcna.org/1651/custom/24288; the Westminster Confession and Catechisms can be accessed at http://www.opc.org/confessions.html.

6. This decision was made on the basis of an appeal made by fourteen same-sex couples and two men whose same-sex partners are deceased (see Obergefell et al. v. Hodges, Director, Ohio Department of Health et al.).

7. The First Amendment of the U.S. Constitution states that “Congress shall make no law respecting an establishment of religion, or prohibiting the free exercise thereof; or abridging the freedom of speech, or of the press; or the right of the people peaceably to assemble, and to petition the Government for a redress of grievances.” The improper application of this amendment has robbed local communities of their right to exercise freely their belief in God by teaching their children about Him and His ways (as revealed in Scripture) in public schools which are funded by their tax dollars.

9. Secularism is defined as the belief that religion should not play a role in government, education, or other public parts of society (Merriam-Webster Dictionary). Note: Remember the difference between a system of religion and religion.